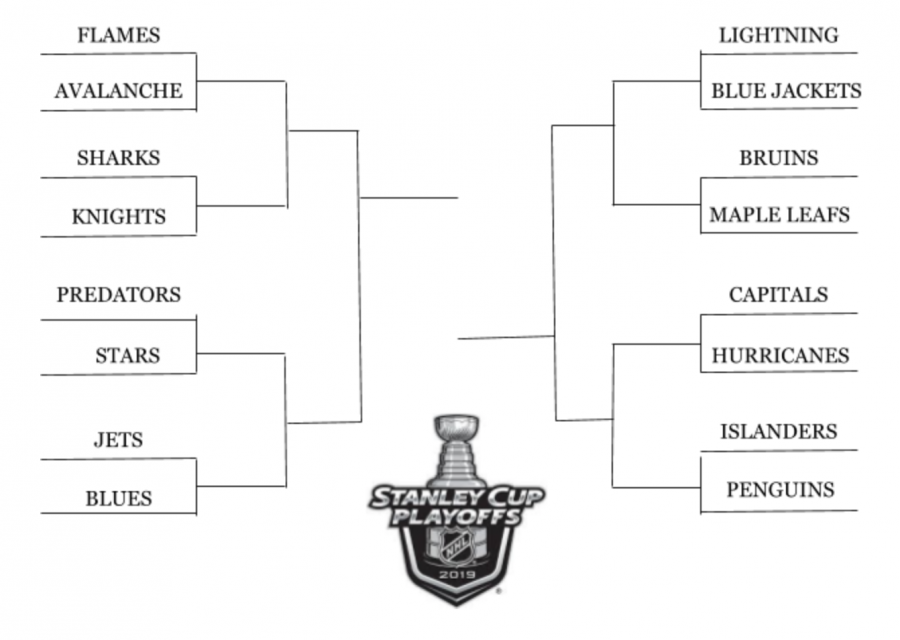 The NHL regular season is officially over. The playoffs began yesterday, as four of the first-round battles had their opening game. In case you haven’t been following along, here’s a quick preview of each of the matchups as we begin the quest for the Stanley Cup.

The Lightning come in not only as the Presidents’ Trophy winners (most points in the league) but also with the incredible forward Nikita Kucherov, who led the NHL with 128 points this year. Meanwhile, the Blue Jackets barely slid into the playoffs as the last wildcard. The Lightning have shown their strength all season and it looks like they will continue to dominate in the first round.

The Maple Leafs made the biggest move of the offseason when they signed All-Star John Tavares, but they have struggled in the playoffs in recent history and have a losing record in their last 14 games. On the flip side, the Bruins tied for the second-most points in the league this season and are experienced playoff winners. One of the most exciting matchups of the first round, both teams boast talented sides that could swing the series in either direction.

The defending champion Capitals, with star player Alexander Ovechkin, are once again a favorite to make a deep run in the playoffs. They come up against a surprising Carolina Hurricanes team that is in the postseason for the first time since 2009. The Hurricanes are young and hungry, but the Capitals won each of their four regular season matchups. While the Canes might challenge them, the Caps will be hard to stop as they look to repeat their celebration from last season.

Sidney Crosby and the Pittsburgh Penguins are back in the playoffs — what a surprise. The Islanders, however, have overachieved after losing John Taveras in free agency. Both squads have talented depth and playoff experience. The Islanders will rely on their top-ranked defense to try to shut down Crosby, Evgeni Malkin and the always-threatening Penguins offense, who will attempt the difficult task of stealing a win in front of the raucous New York crowd.

The Predators are once again the top seed in the Central Division, and, with a strong finish to the regular season, they look like one of the favorites to advance out of a strong Western Conference. Opposing them is a Dallas Stars squad that has won with strong defense and goaltending. This series looks like one where scoring will be hard to come by — the play of All-Stars like Tyler Seguin of the Stars and Filip Forsberg of the Predators might be the difference.

The Jets were preseason favorites to make a dominant run in the playoffs, but since the All-Star break, they have really struggled. The Blues, on the other hand, were in last place in the NHL in January before going on a run that gave them the best record in the league over the last three months. This matchup will be an exciting back and forth between two incredibly talented teams, each looking to win the first Stanley Cup in franchise history.

The Flames have the best record in the Western Conference despite missing the playoffs last season. The Avalanche, on the other hand, clinched their playoff berth on the very last day of the regular season. The Avalanche have the star power, but the Flames have much stronger depth. This series will be fast-paced and high-scoring, and, it will come down to which team’s goalie steps up the most.

The Golden Knights made a surprising run to the Stanley Cup Finals last year in their inaugural season in the NHL. Now, they look to complete their mission and win the whole thing. The Sharks have had one of the league’s best offenses this season, however, and hold the home-ice advantage. The battle of the Karlssons (no relation) might determine this matchup — “Wild” William for the Knights leads a potent offense, and Erik is one of the top defensemen for the Sharks. These two teams are practically equals, and this series will almost definitely go seven games.