“Gloria Bell” Is A Triumph Of The Spirit 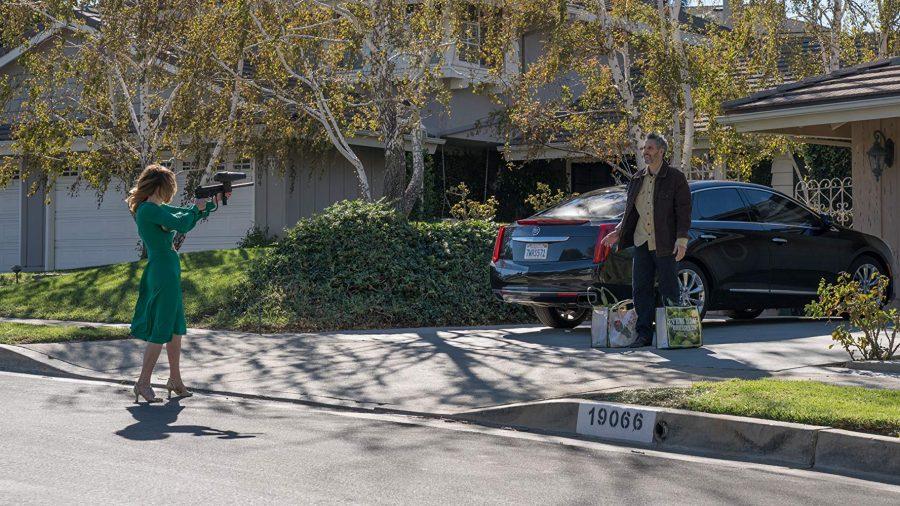 Death is beginning to creep in at the edges for Gloria Bell (Julianne Moore), the fifty-something divorcée whose life co-writer and director Sebastian Lelio’s eponymous film follows. At home, a hairless cat appears periodically as a gangly omen, and on street corners, performer’s gimmicks consist of puckish skeletons bouncing on strings, to whom Gloria feels she must donate a tear-streaked dollar. Her sixth sense, less an overtly ghoulish vision than a cavalcade of morbid reminders, takes on the dimensions of real-life mundanity, goings-on that constantly dredge up a vibrant past amid a wistful present.

Yet Gloria combats what could be crippling sadness with dance. Invigorated by the groovy beats of Earth, Wind & Fire and quintessential ‘80s tunes like “Total Eclipse of the Heart,” melancholy dissipates into movement. Her mindset seems like it could come from a Nicole Holofcener script, especially since her brief interpersonal joys come from comments like “have you had work done?” to which Gloria responds with a hearty “No!” (It is Julianne Moore, after all). She is buffeted by her two children, Peter (Michael Cera), a benign but dismissive sort, and Fiona (Jeanne Triplehorn), a yoga-teacher involved with a Swedish big-wave surfer. Receiving a call from his wholly absent wife (she’s on a soul-searching trip in the desert), wondering if her infant son is asking after her, Peter explodes with “No, he’s not asking about you, he doesn’t speak!” He is tracking nicely. Fiona is only slightly more attentive to her mother’s condition, re-packing death in the whimsical, radiant notions of youth. As she shows her cringing mother videos of her Scandinavian shredder shearing down a monster wave, she assuages Gloria’s safety concerns by telling her “we all die eventually!” Right, then.

During a night of low-fi clubbing, Gloria meets Arnold (John Tuturro), who appears as an ingenuous divorcee fresh from the courthouse, tethered to his family but ready to mingle. Arnold is an ex-Marine, a gun-enthusiast and the owner of a paintball park who, by all accounts, is actually a nervous wreck and a timid softie. They develop a freshening relationship, using their inherent qualities as gently-loosening foils. Arnold shows Gloria how to fire a paintball gun; Gloria shows him intimacy he would never otherwise initiate.

But the perpetual limitation of the couple remains, unsurprisingly, each’s past — a cantankerous triad of a wife and two daughters, financially slavering and emotionally exploitative, for Arnold and a too-amicable distance between Gloria and her ex-husband Dustin (Brad Garrett, playing down his accordion-voice theatrics to become an attractive but combustible stereotype). There is a dinner party, about halfway through Gloria Bell, where Gloria and Arnold spend an evening with Dustin and his new wife Anne to celebrate Peter’s birthday. The awkward social banter, buttressed by eye-darting silences, is expertly orchestrated for maximum grip. As we progress from tepid introductions, through channels of drink, Gloria and Dustin merge memories and delve into an old family album. The two remember their family’s salad days, and Arnold fades right on out the door, literally. Of course, Dustin eventually detonates, lamenting his perpetual absence during his and Gloria’s marriage, revealing the cracks that always existed between them. But Arnold is long gone before any of that happens, embittered by the whole exchange and hurt by Gloria’s ready abandonment for the past.

The trickiest, deftest note Gloria Bell strikes is that of the sheer volume of history and memory smoldering in the background of every divorce. The deep sadness and yearning for youth comes not only as a physical longing for pert-er times, but for formative blocks of time. Relationships, unlike appearances, sear themselves into the spirit, which organizes itself in a multi-variate matrix of speech, action and gesture. When healed or wounded, it has an elephantine memory, sensitive to more than just the accoutrements of the body. There is something inextricable about the people who herded us from instinct to intellect, from cries to words, from words to sentences. For both the guider and the guided, these periods of development remain an ineffable, influential thread of their soul.

Not only does Gloria deal with the existential twinges of a lost partner, but also fights to keep a spot in the world of her children, who were no doubt damaged by the split. The damage, though, does not surface through monstrous qualities. There is no vicious addiction or dramatic bottoming-out. But the painfully palpable cynicism, spawned by separation’s pre-mature mode of self-care, manifests in the present as Gloria’s quiet dismissal. Her kids, by the fault of no one in particular, have figured out how to live alone, without the perceived nuisance of belated parenting or burden of mom’s real strife. Arnold’s deleterious relationship with his children exists, in part, because he claims they never saw him as a person, just a caretaker. Gloria’s family sees her as more than that, but only slightly. She is a loving gnat, a not-needed mother in her kid’s grown-up world of people.

Hurt by a score often incommensurate with its scene, Gloria Bell could have had no music other than the various hits Gloria dances to. These are the only times when she finds release from despair, that pervasive human tendency which is, as Søren Kierkegaard says, a sickness unto death. But the rhythm of dance, for Gloria, acts as a spiritual diffusion of these existential tensions. She embodies the film’s kind message, that despite our increasingly humiliating existence, there exist spaces where we become secondary, moved by occult forces and present only as shimmering clouds of energy, pulsing to the drum of another. The mystery of life is replaced by the inarticulate urge of the beat. Enjoy it while it blasts.