Netflix’s “Sabrina” Is Back With A Vengeance 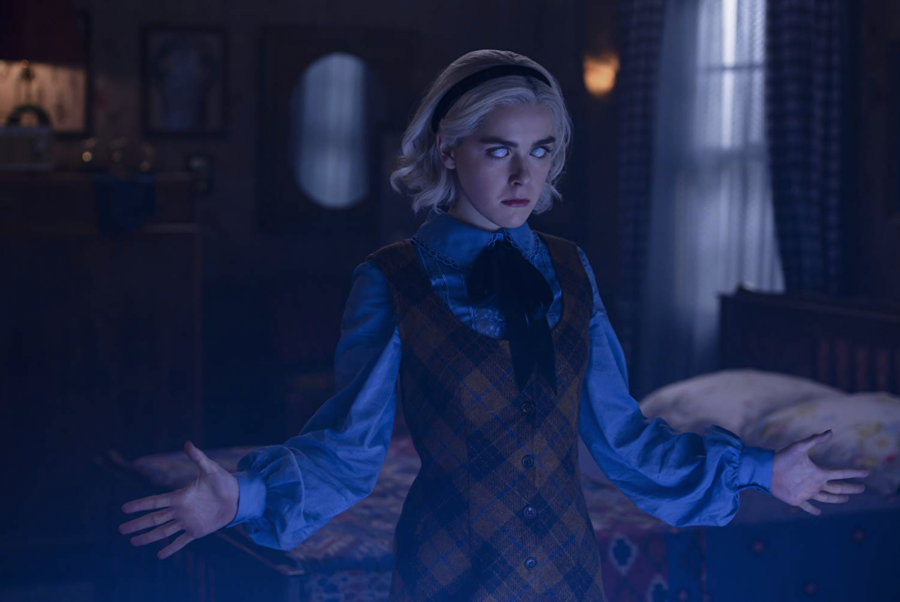 This past fall when the first half of The Chilling Adventures of Sabrina (CAOS) premiered, I reviewed it and was left with a few stylistic qualms. However, when Netflix announced the release of Part 2 for this past Friday, I found myself eagerly anticipating the next installment. I was not disappointed; the new episodes are darker, witty-er and sexier. After establishing itself in the canon of teen melodramatic occult horror, Part 2 slips deeper into the witchy underside of Greendale. Rentrée a newly single (and platinum!) Sabrina, played by Kiernan Shipka, leaving the innocent, mortal side of herself behind. Like the titular character, the show takes the premises of Part 1 and amplifies its effects through character and plot development.

While this version of Sabrina takes a newly dark and modern turn, it still pays homage to the original. The show’s soundtrack is an eclectic combination of modern pop songs and retro rock, highlighting the fluidity between generations. The show finds itself in a time warp of conflicting ideas. A major plotline of Part 2 is the transition of Theo Putnam, a trans boy who was still going by his given name of Susie in Part 1. One would think, with such a contemporary narrative, there would be scenes of characters texting back and forth. However, there are no cell phones, or Internet, for that matter. As it turns out, witches prefer to communicate by astral projection. The premise enters a conflated time period, stuck somewhere between the current era of political correctness and simple passivity of yesteryear.

The juxtaposition of time is further personified in the differences between the male characters of the show. There is the archaic Father Blackwood, High Priest to the coven of witches at the Church of Night, who favors antiquated ideas of gender roles. His beliefs are exacerbated by his treatment of both his daughter and his fiancée; the latter of when he places under a spell of submissiveness. Sabrina’s ex-boyfriend Harvey Kinkle is better, but consistently falls into traps of chivalry. As Sabrina’s powers develop and she becomes more physically intimidating than he, Harvey visibly recoils from her. Their tension comes to a head in Part 2 when Harvey comes to rescue Sabrina from witch hunters and finds her levitating with power. His regressive tendencies don’t seem to bother Sabrina, though, as she seems to be self-righteous enough for the both of them.

Sabrina’s new love interest for Part 2 is the most progressive of them all. Nicholas Scratch is the bad-boy warlock at the Academy of Unseen Arts, played by the devilishly handsome Gavin Leatherwood. Billed as the darker, dangerous option to Harvey’s patented good-boy character, Nicholas’ undeniably gentlemanly side is first displayed in the last episode of Part 1. As Part 2 progresses, Nick reveals himself to be truly good-hearted, constantly putting Sabrina’s desires before his own. In episode 1 of Part 2, Sabrina challenges Nick for Top Boy, a position at their school, for which he is the first to encourage her. That is only the first act of his unending support for Sabrina, whom he continues to support even when her ideas challenge his own. This new sensitive, evolving, self-sacrificing male character, in a teen drama to boot, lends itself to the modern tones of the show, and I can’t wait to see how his character develops over the next season in contrast to the static nature of both Father Blackwood and Harvey.

Overall, the addition of Part 2 to the preexisting episodes served to complete the arching storyline, building upon the foundational set ups of Part 1, while delving deeper into the world of Satan-worshiping witches. The premise is deeply rooted within the critique of religion, and Part 2 takes the biblical inspiration of Part 1 and exaggerates it tenfold. Expanding on its original critique of gender roles within the Bible, specifically between Lilith and Lucifer, CAOS challenges our preconceived notions of the relationships between men and women.