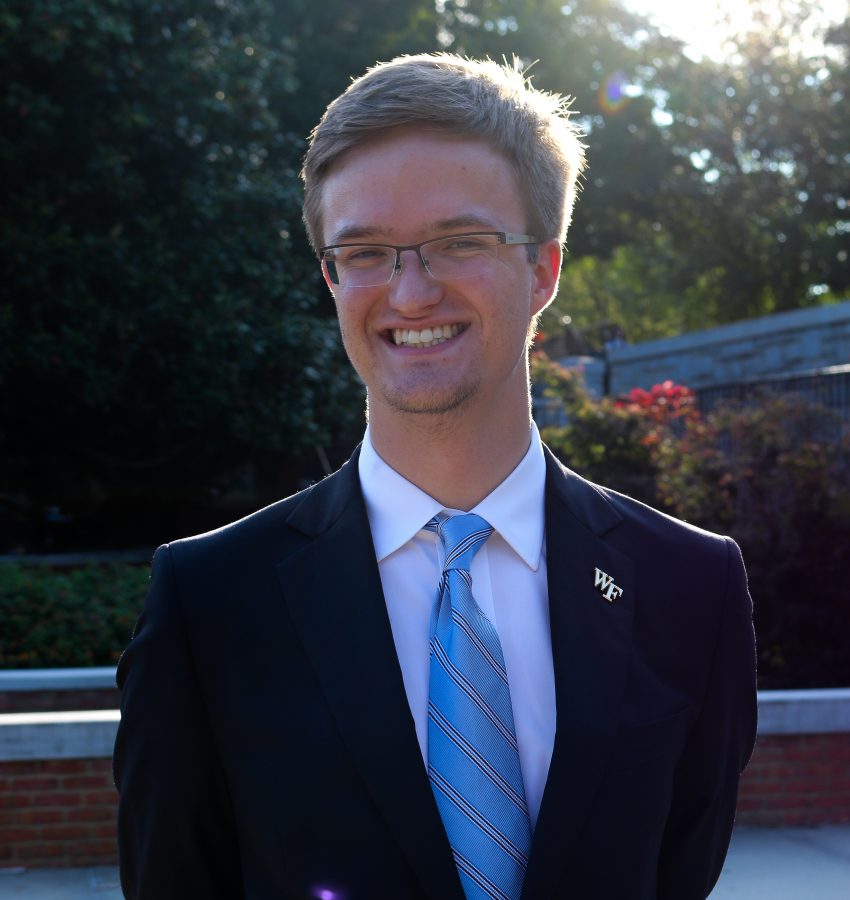 If you’ve ever seen a student in a suit up on the Quad or in Campus Grounds, there’s a good chance it was senior William Morgan. While Morgan has made quite a recognizable image for himself on campus, he’s also made quite the name for himself, too.

The history major with a triple minor in politics and international affairs, creative writing and Latin, is involved heavily on campus, particularly in Student Government. Upperclassmen will remember seeing his name on the ballot for Student Government President twice.

Now that graduation is upon him, Morgan, a student with a great deal of school spirit, reflects on his time at Wake Forest and how he’ll eventually return to his soon-to-be alma mater.

What made you want to come to Wake Forest?

To be perfectly honest and transparent, it came down to the fact that Wake Forest was the school that accepted me. It’s always been a school that’s been in the family, we’re old gold and black through and through. It’s funny — my dad works here, but I had never really been on campus before pre-orientation, when my dad had to show me around. I was really attracted to the idea that it would be close to home. I knew people who were going. I knew it was a fantastic school, but I just didn’t know the extent of the quality.

So, you were almost going in blind?

A bit. When people find out I’m from Winston-Salem —

— yes, exactly, so they’re like, “So, you’ve always known?” And I was like, “No, I didn’t always know.” I’ve always supported the basketball team, the football team, been to all the bowl games and ACC tournaments, sure, but I had never really seriously considered going here. I had applied, but like, I thought I was going [somewhere else]. Then I totally realized, in a humbling moment, “I’m going to Wake Forest. This is the place for me.” I had to discover that; I didn’t know that to begin with.

Tell me about what you’re involved in on campus.

I am Academic Committee Co-Chair on Student Government. I’ve been on Student Government all four years and ran for President twice. I am the President of the Resident Student Association, which I’ve also been involved in for four years. Aside from that, I am in a bunch of different honors societies. I am President of the Leadership Society, Omicron Delta Kappa. I am in the Classics Honor Society, History Honor Society and I just got into Phi Beta Kappa. Oh, and I am also a President’s Aide and have been so for the last two years.

That’s a lot of commitments. How do you balance it all?

(Laughs). That’s been my battle for the past four years. I think about my extracurriculars as something I really want to do, and I only do it if I really want to do it and I’m really willing to commit my time. Otherwise, it’s just busy work, and I can’t do that. I love school, but it’s a lot of busy work. I try to think about it as I’m doing things for people I care about as opposed to I’m just doing stuff for school.

Exactly! I think about it in terms of people, less than in terms of work or padding stats, because that’s no fun.

Can you tell me about what you’ve done in Student Government and what you would like to see in the future?

One thing, during the fall of my sophomore year, I got to be on an academic calendar sub-committee. We changed the calendar based on student feedback, which was really cool. It’s probably one of my favorite moments, working with the faculty and working with student feedback from the year before. We added a reading day, added a day to fall break and lengthened winter break — things that students wanted. It’s something I’m really proud of.

I encouraged my fellow representatives to think about their job as less in terms of showing up at Senate and instead focusing more on what it means to be a representative. For me, that means going out and being an active delegate. Go out to groups, listen to what they have to say and then bring those concerns back. Otherwise, we talk about getting constituent concerns, but we don’t actually go out and get them. There are a lot of things I’d like them to do, but the biggest thing would be to return to the idea that we have a duty and that we are elected for a reason.

What did you learn from running for Student Government President twice?

I learned that it’s nearly impossible for non-Greeks to win. It’s a lot of fun to campaign, but you have to love it. Most people are not cut out for campaigning — it’s so exhausting, mentally, physically, we have to talk to all these people. The biggest thing I would say I learned was not to devolve to this sort of fake version of yourself, which I feel like a lot of people feel like they have to do in order to win the votes to be seen. For me, I think you really have to be yourself and fight for the things you truly believe in.

What’s your favorite Wake Forest tradition or thing about the school?

Oh, gosh. I would say Hit the Bricks. It seems like everyone shows up to that — the whole community. I get to show up and parade around in my tennis shoes, but with my suit, so people see me as a man of the people, you know. I love how it represents Wake Forest in how the groups are spread around in this circuit. Anything involving the Quad, which includes Project Pumpkin, is my favorite tradition by seeing everybody and being part of this community based [in one area].

Also, Pro Humanitate means a lot. To me, it’s an ethical mandate to care about building your own character so that you can better help other people. Serving the community is great, but that’s the step after figuring out how to better yourself.

I’ve actually seen a photo of you at the Hit the Bricks, running in a suit. You’re known around campus for being very formally dressed. Why? What do you wear on your day off?

(Laughs). It started in high school during AP exams in my junior year. I was taking the exams and I thought one day: I’ll wear a tie today. I decided that it’s part of who I am and it’s how I want to be known; I’m big on self-presentation. I’m not too judgmental about how other people present themselves because obviously, that’s not right. I care about having an intentional image, personality and character. For me, that means dressing up. It’s not just how I want to be recognized, but how I want to portray myself. I’m someone who takes myself seriously, but at the same time it’s fun. I can wear some nice, flashy colors here and there. I like to be a little bit of a showpiece for all the things I want to be. It’s that saying: not just dressing for the job you have but the job you want, and I want to be a professor. I’m not going to wait ten years to dress up. I start now.

I have to ask — do you wear fancy pajamas?

I do have fancy pajamas but I don’t wear them, actually. I’ve always wanted a red silk sort of deal with a nice night cap. I actually just wear a t-shirt and pajamas. Just a normal guy, for the most part.

Do you have any remaining Wake Forest bucket list items to check off before graduation?

I have to talk to all of my professors, and I have to send them notes — personal thank you notes to acknowledge the many years they have dedicated to me and how grateful I am for that. I don’t see [graduation] as a finality, because these relationships will be kept for the rest of our lives. I want to continually invest in that right now, so I don’t forget later.

What are your post-graduation plans?

I’m in-between teaching high school at my high school, R.J. Reynolds, or another high school in the area, in either history or Latin, and doing research. I’m trying to do teaching and research simultaneously, here with a professor or somewhere else.

I’ve heard you want to come back and be a professor here someday. Is that true?

It’s totally true. I would like to be a professor here in the history department. I’d like to be chair. Hopefully provost or maybe president someday.

Yeah, absolutely. But you can only hope for so much.