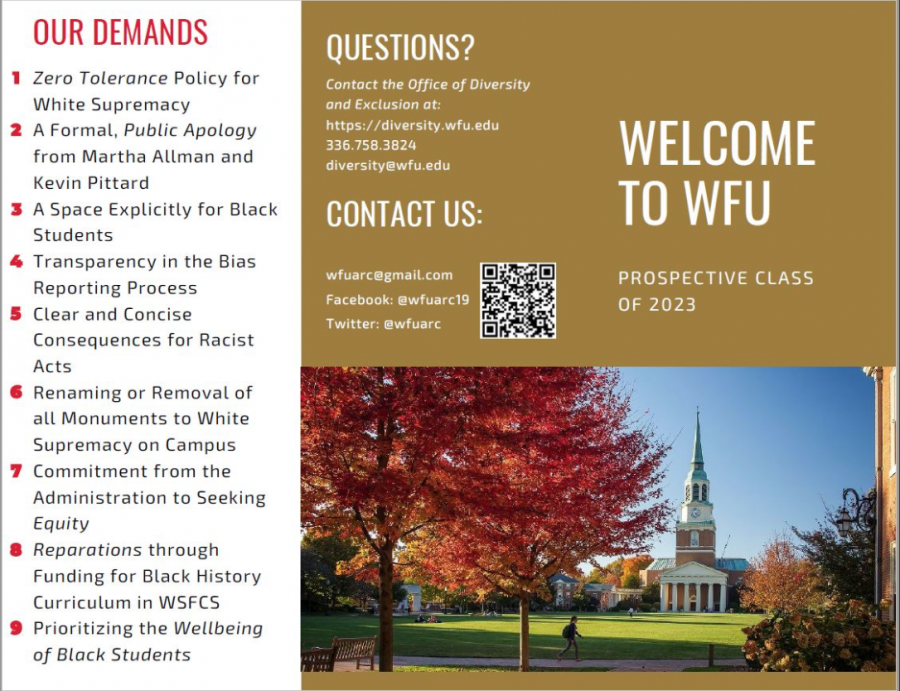 By the time they leave Campus Day, accepted students have a wealth of information in the form of fliers, pamphlets, booklets and handouts that they received at every corner. This year, some accepted students left with a new brochure handed out by a student group in order to shed light on Wake Forest’s past and present.

On the second Campus Day on April 12, the Wake Forest University Anti-Racism Coalition distributed a two-sided brochure that details instances of racism on campus and information surrounding the university’s ties to slavery.

The Anti-Racism Coalition, a student group that formed this semester, has put forth nine demands and is striving to establish a zero-tolerance policy for white supremacy.

Their pamphlet addressed the class of 2023, as “Welcome to WFU” is centered in bold letters above a photo of Wait Chapel on the front cover.

The Anti-Racism Coalition provided the following statement to the Old Gold & Black:

“On Friday, students mobilized to distribute the brochures because they felt that Wake Forest’s class of 2023 deserved an authentic overview of Wake [Forest]’s racist past and present as opposed to inevitably finding out when they come here in the fall.

“The Anti-Racism Coalition has called upon the university to hold itself accountable for the ways in which it inflicts trauma on its students of color. Our demands for reform and accountability remain largely unmet. So long as Wake [Forest] continues to dismiss the demands of students of color, we will continue to resist.”

“The Office of Diversity and Inclusion, and the three identity centers under this administrative structure, is committed to supporting and advocating all members of our campus community,” said José Villalba, vice president for Diversity & Inclusion. “And though our work may sometimes not be seen or acknowledged by every student, staff or faculty member, it doesn’t diminish the positive impact we have on our campus.”

On April 15, the Anti-Racism Coalition shared a tweet in which they stated regret for “mistakenly” referring to ODI as the Office of Diversity & Exclusion.

In an email to the Old Gold & Black, the Anti-Racism coalition explained that the brochure was created by a few members of the group who took initiative in the planning this action for Campus Day and that other members who weren’t involved in the planning noticed the misnaming of the ODI.

The misnaming of ODI as the ‘Office of Diversity and Exclusion’ was brought to the attention of ARC by other members who weren’t involved in the brochure’s creation or the execution of the accepted students day action,” said the Anti-Racism Coalition in an email to the Old Gold & Black. “Essentially, the misnaming was an oversight, and opened up a discussion about how conflating the entire ODI with its leadership [and] university administrators is important to avoid. Moving forward, we then decided to issue a statement of regret, acknowledging the misstep and continue our work as a collective.”

The inside of the brochure is divided into two sections, the first titled “You’ve been Lied To!” and the second “A Racist History … ” Under the first header, it states that the university “is not ‘Pro Humanitate’ towards people of color” and that it “consistently ignores the demands of its students of color, especially black students.”

“In some regards I know our university can do more and be more intentional around inclusion and equity efforts, particularly as it relates to underrepresented members of our community,” Villalba said.

The second section of the pamphlet, which ran across two-thirds of the inside, describes a variety of information surrounding the university’s history and more recent incidents of racism on campus.

Introduced as the “real story of Wake Forest,” the second section discusses the university’s relationship with slavery. First, they note that university buildings such as Wait Chapel,Taylor and Poteat are named after “slave-owners, Confederates, and racial eugenics.”

According to the 1840 U.S. Census, Samuel Wait, who served as president of Wake Forest from 1833 to 1846, owned four slaves. The ages and gender of the slaves are not listed in the census. Serving as president of the university from 1884 to 1905, Charles Taylor is also documented as having served for the Confederate Army during the Civil War. As chronicled in a collection on Taylor from the University of Virginia’s Special Collection Department, he served under both General Robert E. Lee and General Stonewall Jackson. The final individual listed, William Poteat, who was university president from 1905 to 1927, was extensively involved in the movement supporting eugenics. His specific activities surrounding the topic are documented in William Louis Poteat: A Leader of the Progressive-Era South and include holding seminars and serving on committees focused on eugenics.

“Our ultimate aim was to share a brief overview of racism at Wake [Forest] with the prospective Class of 2023, especially its students of color, who will be most impacted by these incidents and the continued failure of the university to respond accordingly,” said the Anti-Racism Coalition in an email to the Old Gold & Black. “Prospective students deserve to have all the facts before making a four-year commitment to a university that has continually left its commitments to protecting students of color unfulfilled.”

The next section detailed that “the Reynolds Family, who donated the land you are standing on now, started their first tobacco company with the profits they received from slave labor.”

The tobacco company itself was not the product of slave labor, as it was founded by R.J. Reynolds in 1875, 10 years after slavery was abolished. However, R.J. Reynold’s father Hardin Reynolds owned a plantation in Virginia beginning in 1840 that benefited heavily from slavery. Virginia Tech’s archival materials document that, by 1863, there were 88 enslaved laborers on the plantation.

In 1946, the Z. Smith Reynolds Foundation, which is directly tied to the tobacco company, offered Wake Forest College $330,000 annually in perpetuity under the stipulation that the college move to Winston-Salem and build a new campus in the foundation’s city.

Referencing the Howler, the pamphlet also mentioned the photos of blackface and the inclusion of other racial slurs, as well as the photo of Dean of Admissions Martha Allman standing in front of a Confederate flag in 1982.

The final paragraph transitions to more current issues, which the Anti-Racism Coalition say “continue to haunt students of color who attend Wake Forest.” These include the video of a freshman calling her resident advisor a racial slur, a bucket of urine being left outside the associate chaplain for Muslim life’s office in 2014 and Kappa Alpha Order’s former hosting of an annual Robert. E. Lee party.

“After the brochures were distributed, students of color were overheard expressing legitimate concerns about attending Wake Forest,” said the Anti-Racism Coalition in an email to the Old Gold & Black. “However, they deserved to know how racism affects the lived experiences of current students of color and understand the realities of campus climate before coming to Wake [Forest].”

Editor’s note: An earlier version of this article included a sentence and quote from the Anti-Racism Coalition that misrepresents how the Office of Diversity & Inclusion was misnamed in the brochure. The sentence and quote have been updated to accurately reflect the situation.