Totems Of Dallas And Miami No More: Legends Retire 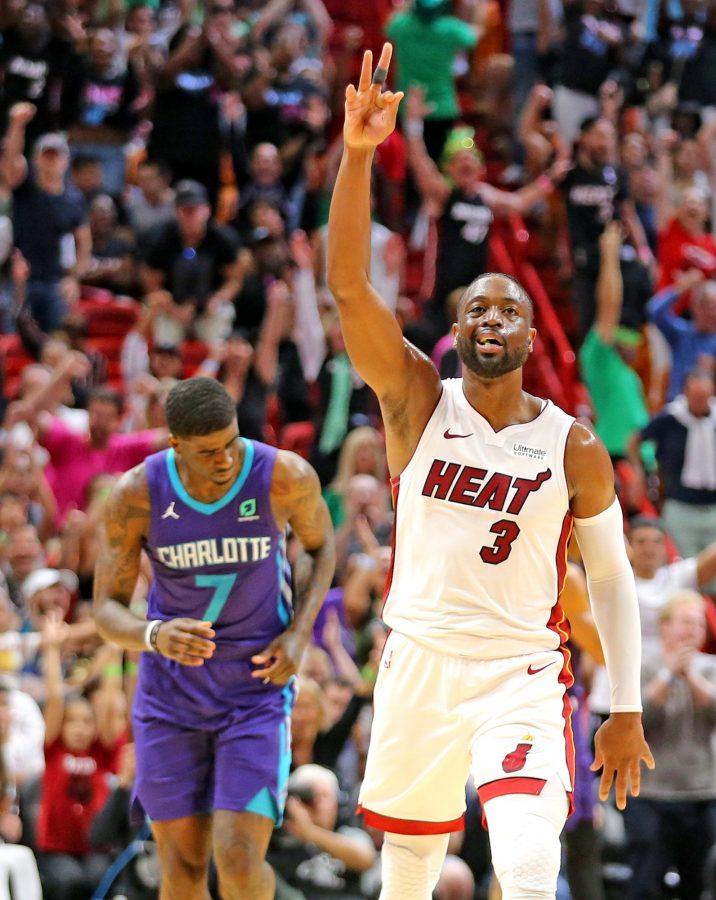 Miami Heat's Dwayne Wade signals his three-pointer in the fourth quarter against the Charlotte Hornets on Sunday, March, 17, 2019 at the AmericanAirlines Arena in Miami, Fla. (Charles Trainor Jr./Miami Herald/TNS)

One feeling was shared in two stadiums last Wednesday, as the curtain of a long show descended for two NBA legends.

Dirk Nowitzki made a fade-away shot from midrange, like he had always done for the past 21 years in Dallas;  Dwyane Wade contributed a triple-double performance, like he always has for Miami.

48 minutes had never seemed so short for players like Dirk Nowitzki and Dwyane Wade. Before the start of the regular season, Wade announced on social media that this season would be the “last dance” for him; Nowitzki remained uncertain about retirement until he announced it in the last game of the season against the Spurs.

Despite the fact that Wade could not lead the team to victory at his last game against the Nets, his last home game went well against 76ers back on April 9. Miami was at the edge of making the playoff at that time, and Wade had one of his best performances.

In the first quarter, Wade drove into the paint a couple of times and made his signature midrange jumper, scoring eight points in total. He led the team to be up by 20 points at halftime, and the whole second half was his farewell showcase. In the last quarter, he made four 3-pointers and scored 14 points to end his last home game.

After the game, Wade jumped on the table of American Airlines Arena for the last time, just like he did 10 years ago when he made the buzzer beater against the Bulls. In the mix of emotional cheering from the crowds, Wade retired from his NBA career.

In the last home game for Nowitzki, he took 31 attempts, but the fans still wanted more from him. Nowitzki was Dallas; he had been there for 21 years and brought the city a championship back in 2011. He was the player who played for a single team for the longest time in NBA history.

In the opening quarter of his last home game, Nowitzki scored the first 10 points for the team, making two midrange shots and two 3-pointers in a row. His hot hand remained in the latter quarters as well, helping the team lead by 30 points at the half time. The deficits were not cut in the second half, and fans were able to fully appreciate Nowitzki’s moves on court again and again.

The retirement of Wade and Nowitzki marked the end of an era. Together they won four championships, scored a combination of over 50,000 points and led the player statistics in their franchise histories. Undoubtedly, they both will be Hall of Fame candidates in the near future.