Tiger Roars Back: A Masters Miracle 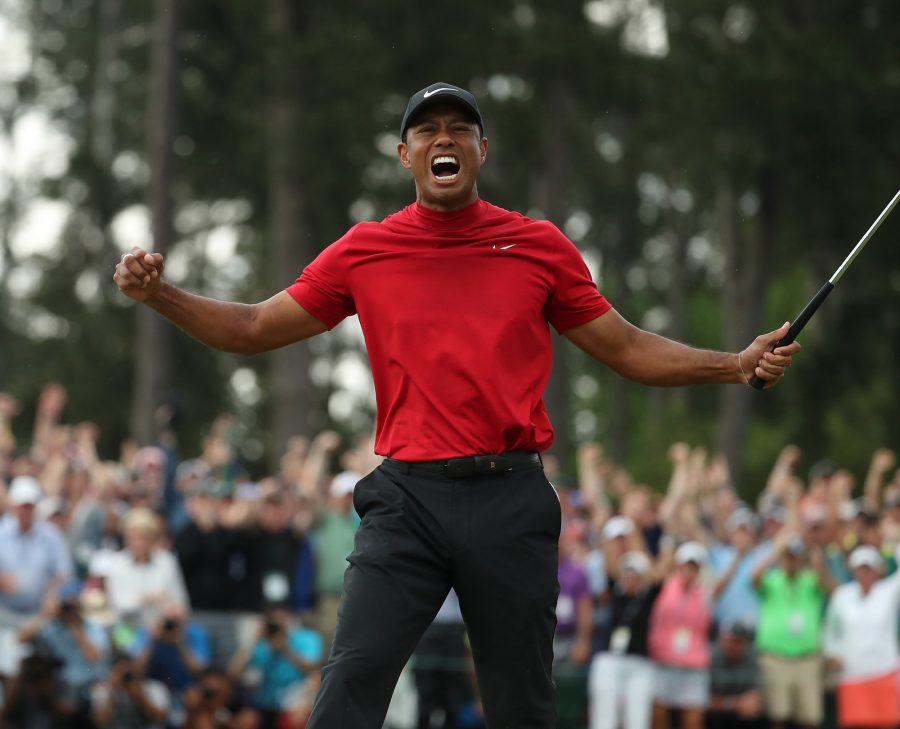 Tiger Woods celebrates after winning the Masters during the final round on Sunday, April 14, 2019, at Augusta National Golf Club in Augusta, Ga. (Jason Getz/Atlanta Journal-Constitution/TNS)

In what will go down as one of the greatest comeback stories in the history of sports, Tiger Woods won the Masters 22 years after his first victory in 1999. After four back surgeries, a series of problems in his personal life and multiple failed attempts at a comeback, the question most people had asked about Tiger for the last decade was whether he would ever be able to golf again. Now, 11 years after his last major championship, he has won his fifth green jacket.

The leaderboard was dominated by big names all weekend. After the first two rounds, five players who had previously won a major championship shared the lead —including former Masters champion Adam Scott. This had never happened after any round at any major before. Tiger was only one shot back, but other big names like Dustin Johnson, Phil Mickelson and Rickie Fowler were all within striking distance as well.

Despite the intimidating leaderboard, plenty of golfers made big moves in the third round. Tony Finau, Patrick Cantlay and former Demon Deacon Webb Simpson were all one shot off of the course record, shooting an 8-under-par 64. It was the first time that more than one person had shot a 64 or better in the same round at Augusta National. At the end of the day, however, it was reigning US Open champion Francesco Molinari who held a two-shot lead over Tiger and Finau, with three-time major championship winner Brooks Koepka hot on their heels.

The threat of bad weather changed the format for the last round on Sunday. Instead of the traditional pairings and a finish at twilight, the tournament would end with groups of three and start early in the morning. Tiger had never won when he didn’t hold the lead going into the last round, but there was a feeling that something was magical was about to happen when he teed off in the last grouping alongside Finau and Molinari.

Molinari was unflappable for the first two-thirds of the day, and no one was playing well enough to catch up to him. Then, on the 12th hole, Molinari hit his tee shot into the water for a double-bogey. Tiger capitalized. Woods birdied the 13th and the 15th, and the leader was once again the man in the red turtleneck. Tiger took control at the par-three 16th, where he hit a beautiful tee shot to set up a birdie. He had a two-shot lead going into the last two holes.

The 17th hole is tricky, but Tiger made it look easy with a huge drive and a par. As Tiger walked to the 18th tee, only Koepka had a chance to make things interesting. At last year’s PGA Championship it was Koepka who won by holding off a late push from Tiger, and it looked like now Tiger would get his chance to flip the script. Koepka had a short putt for birdie that would have forced Woods to make par to win, but he pushed it left. The large group of patrons chanted Tiger’s name as he approached the green, needing to make a bogey in two putts to win the Masters.

The putt for par just missed, but a short tap-in made it official. A triumphant Tiger Woods raised both arms in the air as the win was completed. The crowd at Augusta went wild, and Woods celebrated with his family. His two children had never seen him at the top of his game before, and now they were in attendance to witness the historic victory. It truly was a storybook ending to the weekend.

“I just wanted to be able to walk again … low and behold here I am winning another major championship,” Tiger said in an interview Sunday on ESPN, “A lot has transpired — the body, the game, life, it’s just all evolved, it all moves forward.”

The fans loved it, but so too did Tiger’s peers. The golfers he’s competing against grew up idolizing him, and now they can all say that they’ve gotten the chance to lose to him.

“It’s incredible,” remarked Koepka after the tournament. “I mean the atmosphere around Tiger is mind-blowing. To be inside the ropes and to just kinda see it as another player is pretty cool and unique.”

Tiger’s victory put him ahead of Arnold Palmer and just behind Jack Nicklaus for the second-most Masters wins of all-time, and moved him to only three behind Nicklaus’ record of 18 major championships. It’s only been two days since the Masters ended, but Tiger is already the favorite to win the PGA Championship next month, as well as defend his title at August next season. It’s been quite a long time, but once again, Tiger Woods is the best in the world.