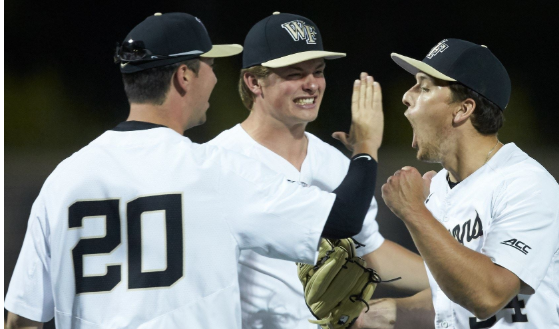 Wake Forest baseball took care of business and then some during a crucial week. The solid week boasted a win against Liberty and a huge series win versus No. 8-ranked NC State. The success shows on paper as Wake Forest is 9-3 in April, 11-10 in ACC play and 24-17 in total. On the field, Wake Forest is exhibiting a sense of will and confidence with their fiery body language.

The Liberty game was revenge for Wake Forest. Earlier in the season, the upstart Flames handedly beat the Deacons 9-3 on their way to a solid regular season start. Liberty rolled into the Couch confident with a 27-8 record, but the Deacs revenged their earlier loss with a 6-2 win. Solo home runs by freshman Brendan Tinsman and sophomore Shane Muntz put the Deacons over the top after being tied 2-2. The bullpen, especially sophomore Antonio Mendez, was fantastic, as they allowed no runs in the final five innings.

After the Liberty game, the Deacons hosted nationally ranked NC State. This was a big test for the Deacs as they were previously 0-5 against opponents ranked at the time of the game. The answer: a series win catapulting the Deacs confidence going forward.

The first game was all about junior pitcher Colin Peluse. The starter put up a quality start for a team in need of a shutdown performance out of one of their starters. Peluse went six innings of three-hit, one-run ball, striking out seven, and only walking three batters.

The Wolfpack took care of business in the second game, but it was not easy. Sophomore DJ Poteet started off the game in an exciting way, robbing a would-be leadoff home run by the Wolfpack. Even with the loss, the Deacons showed heart, coming back from a 3-0 deficit. Sophomore Bobby Seymour had two of his seven RBI’s in the series, adding to his ACC RBI lead. The Wolfpack pulled out a win with a solo shot in the seventh.

The rubber match was sure to be a good game, and it did not disappoint. State jumped off to a 7-0 lead through two innings; however, the Deacons hit three home runs by freshman Michael Turconi and sophomores Bobby Seymour and Shane Muntz to close the gap to a score of 7-6. NC State added a run in the seventh before their bullpen lost all control in the bottom half of the inning. The Wolfpack pen gave up an RBI single and two bases loaded walks to give the Deacs an 8-7 win.

The comeback was massive for the Deacons. Wake Forest’s body language at the end of the game showed a team of fighters and players hungry for more big wins. The outpouring of emotion after the final out illustrates a confident team finally hitting its stride.

Wake Forest is also showing a bend but don’t break attitude. Over the week, the Deacon pitchers were constantly faced with tough situations. The starters and bullpen allowed multiple baserunners with less than two outs, but they fought out of tight situations to keep games close.

During most years, the Deacons would probably already be eliminated from NCAA tournament action. However, a plethora of quality teams has led to college baseball parity giving Wake Forest a chance at the NCAA tournament.

The committee will analyze multiple factors. The Deacons sit at 24-17 with 14 games remaining. The Deacons will not win every game, so the Deacons will preferably end the season with a clip around 10 wins above .500. The Deacons have a high strength of schedule and are given the benefit of the doubt playing in the tough ACC. What is helping the Deacons is the abundance of teams with similar records. For example, according to D1 baseball, Duke is a three seed in the tournament as of now. The Deacons have the same overall and ACC record as the Blue Devils, and Wake Forest won the season series. With some more wins, the rankings and committee will realize the Deacons are back to form.

The Deacons finish the season with three important ACC series. Wake Forest will play Florida State, Miami and Clemson to finish out the year. As of now, all three teams are three seeds or higher in the tournament. With a quality finish against these ACC opponents, the Deacs may end the year with a tournament-ready resume.