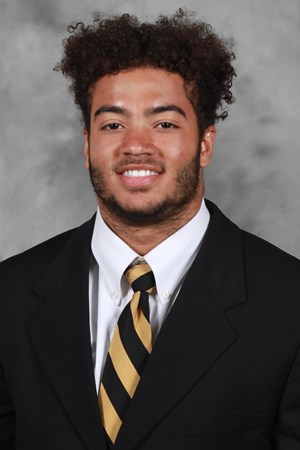 A prolific rusher throughout his college career, few players embody the “Keep Building” motto of Wake Forest football better than Matt Colburn II. He went all the way from being a late addition to the Deacs’ 2015 recruiting class to hanging his cleats as Wake Forest’ sixth all-time leading rusher with 2,528 yards.

After committing to the University of Louisville early in his high school recruiting cycle, Colburn had his scholarship offer put on hold in favor of other prospects that Louisville wanted to offer. Colburn found himself without a college home late in the recruiting process. Head Coach Dave Clawson wasted no time to extend an offer to the talented rusher out of Irmo, S.C. Clawson’s decision paid off as Colburn  quickly became a fundamental contributor. Among his career highlights is a Wake Forest bowl record performance during the 2017 Belk Bowl that saw him rush for 150 yards and score the game-winning touchdown. He also had a career-high 243 yards and three touchdowns in a 56-35 win against Louisville on the road last season.

Now, as a senior, Colburn  looks back at an incredible career wearing the old gold and black. With the NFL Draft and his  graduation fast-approaching, Colburn sat down to relive some of his favorite memories of his time at Wake Forest.

Rafael Lima: Looking back at your Wake Forest career, what are some of your favorite moments as a Demon Deacon?

Matt Colburn II: I probably have two: [the performance against] Louisville, because it just felt like [playing in] high school. It was so crazy and so surreal. It was just a dream come true. Tied with the Louisville game this year is the 2017 Belk Bowl, when I did the back-step into the end zone looking at the [Texas A&M defender]. Just beating an SEC team, you know? You grow up in the south hearing about SEC football and the Alabamas of the world. It was just awesome to beat a team like that.

RL: You recently participated in the Wake Forest Pro Day. How was the experience of running drills in front of some 30  NFL scouts?

MCII: You’re 5 years old and you’re playing Madden from a young age. You’re so used to it that football becomes life [early on]. To see the things you dreamed about becoming reality in front of your eyes is just so incredible. I’m so thankful and so blessed to even have the opportunity to be a part of something special like that.

RL: Did you talk with any specific teams?

MCII: Yeah, I talked to the Ravens and the Chargers. The Chargers scout, James MacPherson, he actually played here at Wake Forest in the early 2000s. So, we’ve known each other pretty much since I’ve been here. He sometimes comes to our practices. I [also] talked to the Rams and the Bills.

RL: I know you also love music and composing your own songs. You even have an artistic name as “Jayburn.” Is that something you plan on keep pursuing at the next level?

MCII: I’ve been doing music all my life. Ever since I’ve been here, even with football, I’ve found time to record and have a schedule. Tonight was actually the last night of recording, [putting] the final touches and final mixes. Everything is good to go. The tape should come out at the end of this month. A lot of my song-writing comes from experiences and different things I’ve gone through. This tape is sort of melancholic. It is very vibey. It’s very late night. Music to me is definitely an escape [from the world].

RL: You came to Wake Forest righ at the beginning of Coach Clawson’s tenure. How much of a culture shift have you noticed throughout your time in the football program?

MCII: It really just started with the leaders we had [when I arrived]. Guys like Ryan Janvion and [Cameron] Serigne were genuine “it’s all about football” kind of guys. They wouldn’t go out on Thursday nights. They wouldn’t [try] to sneak people in their rooms Friday night before a game. As time went on, we had more guys buying in and [thinking] “how about we try to go above what is required?” We changed from “Oh, I have to [practice],” to “Man, I want to [practice]! Why can’t I just do more on my own and get 30 minutes better?” Then, over a three-year span you see the results in the program.