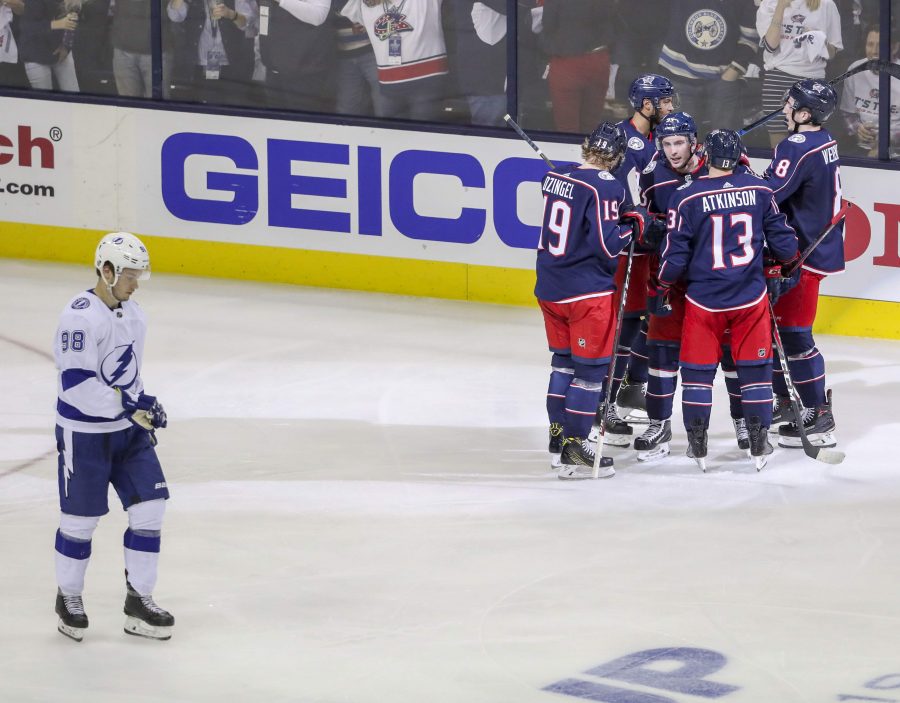 The NHL playoffs are almost always as unpredictable as the NCAA Tournament, but this year’s installment can only be described as chaos. Going into the playoffs, the clear favorites were the Tampa Bay Lightning. The President’s Trophy winners had the best overall record, which included 62 regulation wins. Coming into the first round, they were set to defeat the Columbus Blue Jackets handily. But the most surprising result of the 2019 playoffs so far is that the Lightning not only were eliminated by the Blue Jackets, but failed to win a single game, even with home-ice advantage. After Columbus won the first game of the series in Tampa, game two became a must-win for the Bolts. Instead, the Jackets dropped five goals on them. During the 5-1 blowout, Nikita Kucherov, the winner of the Art Ross Trophy, took out his frustration on Markus Nutivaara with an illegal hit, which lead to his suspension in the next game. Despite one of the most dominant regular season campaigns in recent memory from the Lightning, Columbus moved on.

It’s often said that the most entertaining hockey is played between rivals, so when the Toronto Maple Leafs were set to face the Boston Bruins, everyone was prepared for a great series. Not only are both proud members of the league’s “Original Six,” but the Bruins eliminated the Maple Leafs from the playoffs last year. Both teams have star-studded rosters, and the series has not disappointed. Each game was physically exhausting for both teams, and game seven at home was the turning point for the Boston Bruins. The Bruins will not have much time to recover and will need a quick turnaround to face a rested Columbus Blue Jackets squad.

In the Metropolitan division, the New York Islanders were set to face the Pittsburgh Penguins, and both teams knew how competitive this series would be. The Penguins are always dangerous during the playoffs, grabbing back-to-back Stanley Cup championships in 2016 and 2017. The Islanders took advantage of home ice where they won the first two games, but the most important game of the series was the third. Even in Pittsburgh, the Penguins’ offense could not break through the Islander’s defense. Just like Tampa Bay, Pittsburgh was unable to win a single game in the series, shocking hockey enthusiasts everywhere. The Islanders will face either the Washington Capitals or the Carolina Hurricanes, depending on the result of the rubber match in that series.

The fact that Carolina has taken Washington to seven games is an achievement in and of itself. It could also be said, however, that Washington underestimated the talent of the Hurricanes. Washington took the first two games of the series, but Carolina rebounded with a win in the next two. Both teams have only won games on their home ice, which brings the series back to the nation’s capital for the deciding contest.

On the other side of the bracket, The Western Conference matchups have also been unpredictable. The No.1-seeded Calgary Flames were defeated by the Colorado Avalanche in only five games. The Flames dominated in the first game, but they could not replicate their success for the remainder of the series. Colorado plays a fast-paced style of hockey, and with the help of Nathan Mackinnon and Mikko Rantanen, they are a serious threat. The Avalanche have a chance to rest before they play the winner of the series between the Vegas Golden Knights and the San Jose Sharks. Both the Sharks and the Golden Knights have previously advanced to the Stanley Cup Final, but neither have raised the cup. The Sharks have two elite blueliners, Erik Karlsson and Brent Burns, but the Golden Knights have what may be the best roster depth in the entire league. The Golden Knights took an early 3-1 lead in the series, but the Sharks have won the past two games to even it up.

Another stunning result is that the Nashville Predators and the Winnipeg Jets have been eliminated. The Dallas Stars toppled the Predators by winning their series 4-2. The Stars have not been a serious contender since the 2015-2016 season, when they were the first seed in the Western Conference. Dallas took the first game in Nashville, but the Predators followed by winning the next two. The Stars dominated the rest of the series and eliminated the Predators in a 2-1 overtime win on Monday night. The Stars will face the St. Louis Blues in the second round — a matchup that nobody could have predicted. In January, the Blues were at the bottom of the Western Conference and out of the playoff picture. Yesterday, they eliminated the Winnipeg Jets from the playoffs. The biggest factor is their new goaltender, Jordan Binnington, who has played phenomenally. The Blues won 28 of 36 with Binnington in net, outstanding results for a rookie. Winnipeg has the offensive talents of Patrik Laine and Mark Scheifele which would be enough to terrify most goaltenders.