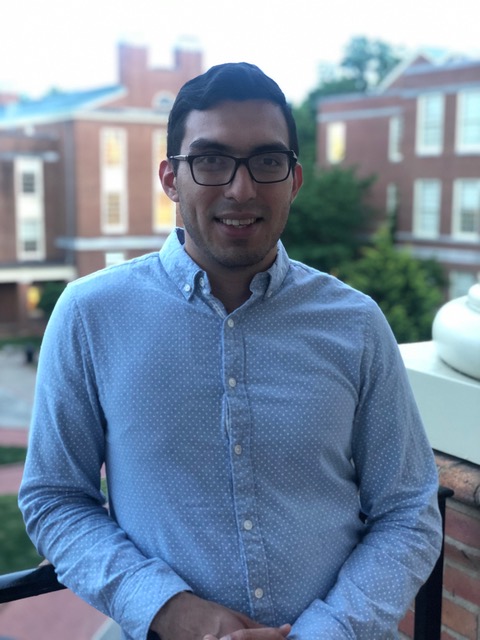 Kevin Ramirez grew up knowing he wanted to come to Wake Forest. As a local, he visited a lot and conducted independent research throughout high school on the effects of different materials and shapes of soccer balls on their aerodynamic properties.

Spending a lot of time in the ZSR Library, Ramirez said Wake Forest “just felt like home. It felt right.” When he arrived, he was interested in studying physics, but after a friend talked him into taking a biology class, he was hooked. He discovered that he could combine his interests in both biology and physics through the biophysics major, and the rest was history.

After taking the core biophysics class with Professor Martin Guthold, he was interested in conducting research. A lot of his friends in the class were graduating seniors who worked in Guthold’s lab, and they suggested he join. After approaching Guthold, who was very supportive, he started work analyzing fibrin fibers, which are important in forming blood clots, using Scanning Electron Microscopy (SEM). Ramirez said this was an opportunity to apply the knowledge he learned in class in a practical setting.

Speaking about his research and major, he loves “[getting to] learn a lot out of all the major sciences and really understand how they interconnect. That helps [you] tackle problems through different lenses. I also really like that you get to understand experiments and how they work, instead of just knowing what they do, which is really helping for troubleshooting when unexpected lab results come up.”

Outside of the classroom, Ramirez is involved in the Organization of Latin American Students (OLAS). The first day he came to Wake Forest, Ramirez explained, he looked for other hispanic or Latin American students.

“It was just a click,” he said about finding OLAS. “I went there and everyone was sort of like me. It felt right. Good food and people you could relate to.”

Apart from OLAS, Ramirez was involved with Nourish International, a club that focuses on an entrepreneurial venture with a social action goal on college campuses. He was involved for one year with a project that helped educate children in Uganda on hygiene and health practices.

As a local, he’s still actively involved with his church, Apostolic Assembly. He serves as a treasurer there and has been involved with the community outreach programs, including blood drives and food pantries.

Ramirez is also a certified EMT. He’s had a job with Lifestar Emergency Services, a private ambulance service located in Winston-Salem, for the past six months, where he works with patient transportation.

When asked about his thoughts on graduation, Ramirez looks back on his time at Wake Forest and speaks highly of it.

“[Wake Forest] gave me great opportunities for research and I always had office hours available to me if I needed them,” Ramirez said.

His advice for future biophysics majors would be to take general science courses before General Physics 1 and 2.

“You’ll be better prepared for the biophysics courses, be able to apply for other medical programs earlier and end with a strong physics knowledge,” he said.

Ramirez will continue working as an EMT over the next year prior to applying to Physicians Assistant (PA) school.