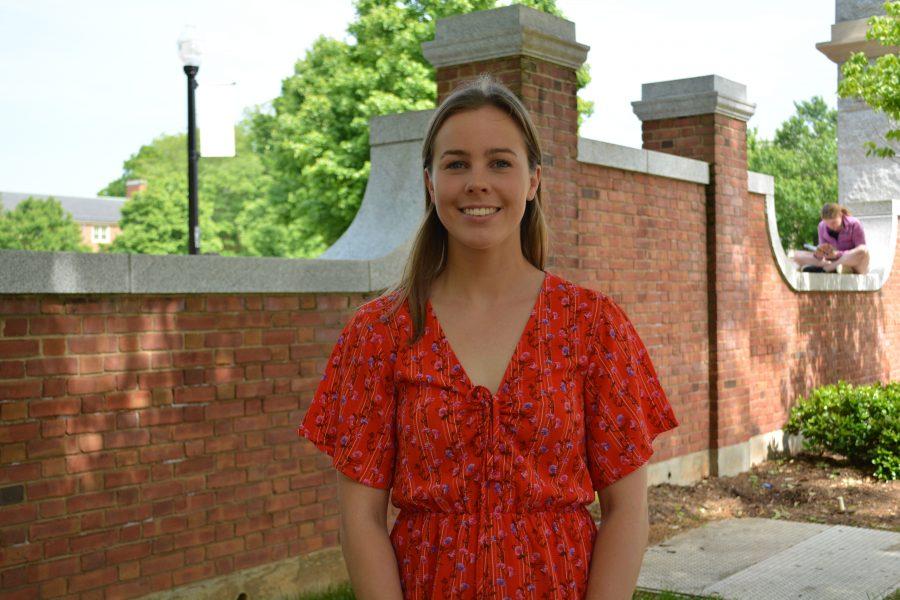 Megan Anderson, a Health and Exercise Science major from Melbourne, Australia, didn’t pick a major that was too far removed from her day-to-day life as a field hockey player.

“I was always more interested in the science-based subjects growing up in high school,” she said. “I didn’t really know anything about what major to choose but then someone mentioned Health and Exercise Science to me and once I looked into it I was like ‘Oh yeah, I like learning this sort of stuff.’”

Her favorite class in the major was Anatomy, as well as the anatomy lab because students get to work with cadavers.

“People think it’s really creepy and gross, but I think it’s just so interesting and such a hands-on class that even though you’re learning a lot, it’s not boring and it doesn’t feel like work,” she said.

She enjoyed Anatomy so much that she decided to serve as a teaching assistant for the lab with Professor Stephen Messier.

“She is an excellent student, combining an inquisitive mind, intellectual power and a tremendous work ethic,” Messier said.

She also took Professor Peter Brubaker’s 300-level Human Physiology class when she was just a freshman, a class that is normally taken only by upperclassmen.

“Despite her young age, Megan did very well in the course and has continued to be outstanding student in HES over the past four years,” Brubaker said.

When asked what she will miss most at Wake Forest, Anderson noted the community-based feel of the school.

“It’s kind of cool how this place can feel like home when for me, home is so far away,” Anderson said, “so to come here and just feel like I belong and feel like I’m involved, and everyone is so supportive and encouraging and genuinely invested in you makes you feel really special.”

Two of Anderson’s biggest accomplishments at Wake Forest were being accepted into the competitive HES honors program and receiving an ACC Postgraduate Scholarship for her academic and athletic work, which she will use to attend graduate school for physical therapy (PT).

She will take a gap year this coming year, during which she plans to apply to PT schools in the United States. In the meantime, one of her professors helped her get a job in Winston-Salem at a PT clinic. Anderson wants to stay in the United States for the foreseeable future and then possibly move back to Australia to be a PT there.

“So much has happened in the last four years; I guess all my adult life is over here so I’m more inclined to stay here for as long as I can,” she said.

Throughout her four years, Anderson developed relationships with several professors in the HES department, including Messier, Brubaker and Gary Miller.

“I first spoke with Megan via Skype when she was still in Australia, as she was being recruited by Jen Averill on a field hockey scholarship,” Miller said. “Her vibrant personality and contagious smile make her a pleasure to have in class and is a great ambassador for the department.”

Miller also notes that Megan has one of the highest GPAs in the major and has completed requirements for honor’s research, all while anchoring the midfield and being a multi-year captain for the field hockey team.

There is no doubt among Anderson’s professors that she has excelled as a student and an athlete during her time at Wake Forest.

“Megan Anderson is very deserving of this recognition as she exemplifies what it means to be a successful student-athlete and HES major at Wake Forest,” Brubaker said.