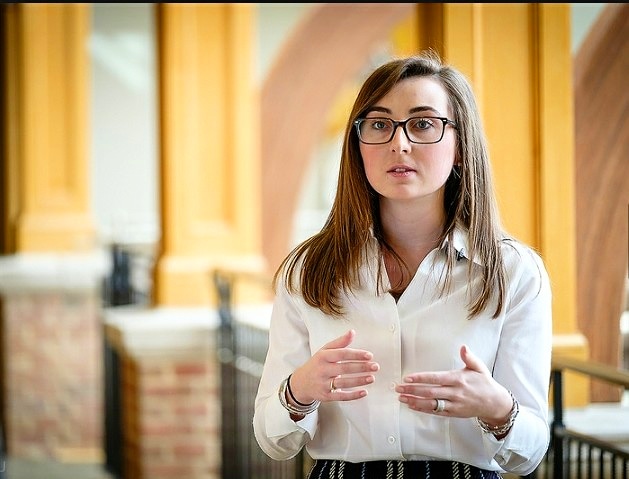 “I’ll miss the physical beauty of the campus, the stupendous joy I feel when the light of golden hour coats the trees in Reynolda Village and the stones on Graylyn House. I’ll miss marveling at Mother So Dear on gloriously sunny days.”

Senior Riley Mistrot, a politics major from Massachusetts, chose Wake Forest after a family friend gave her a tour of campus.

Since then, in her time at Wake Forest, Mistrot has been a leader in many student organizations, including serving as a co-chair for the Student Government Judiciary Committee, a senator, a member of the Board of Investigator and Advisors and a student representative on the College Curriculum Review Committee.

“In my nearly 20-year career, I have probably only known a few students as focused as Riley. She has the capacity to immerse herself fully in her studies and take advantage of every conceivable opportunity on campus,” said Betsy Chapman, whom Mistrot considers a mentor. “Riley worked her way up through several organizations and has made a strong impact in each.”

In addition to her leadership roles on campus, Mistrot was chosen to represent Wake Forest at the 70th Annual Student Conference on U.S. Affairs at West Point in the fall of 2018.

“I’ve had more opportunities than I could have ever imagined when I declared the major,” Mistrot said. She has been spending her final semester at Wake Washington and spent the fall of her junior year studying abroad in Amman, Jordan.

Among peers and professors, Mistrot is noted for her strong leadership skills, ability to connect with those around her and her thoughtful, intentional approach to her education.

“Riley has grit and heart: she is courageous to think for herself and compassionate to want to do great good in the world.  I have no doubt she will do so. Wake Forest is very proud of her,” said Professor Tom Phillips, another mentor to Mistrot. He described her as having “a rare combination of high integrity, bold intellectual curiosity, and practical idealism.”

Last semester, Mistrot was chosen to give an oration at the Senior Colloquium.

“As a major bibliophile, it also tickles me to know that the orations are housed in our much-beloved ZSR. I like knowing that a little piece of me will always reside there,” Mistrot said.

When asked about the favorite class she has taken, Mistrot mentioned her senior seminar in International Relations Theory, taught by Professor Charles Walldorf, as well as China-Africa Relations with Professor Lina Benabdallah.

“I really felt like I got to live and breathe a body of scholarship,” Mistrot said. “Dr. Benabdallah is both a powerhouse of scholarship and a truly gifted teacher and mentor. I’m grateful to have had the opportunity to learn from both her and Dr. Walldorf. Dr. Walldorf challenged me like no other professor has, and I’m grateful that he pushes me continually to improve.”

“Riley is a bright, engaged and passionate student,” Walldorf said. “She came to each class session ready to learn and explore. There are few like her. She has a bright future.”

“Riley is an intellectual leader. She always asks those tough questions and adds more than a grain of salt to any reading or discussion,” Benabdallah said.
After graduation, many who know Mistrot are confident that she will make a difference wherever she goes. She hopes to pursue a career in intelligence analysis in Washington, D.C.

“She represents the highest ethical standards, both in her own work and in the way she conducts herself with others,” Chapman said. “She is a servant-leader. The accolades she has (rightly) received were never a result of her desire to inflate her resume. At her core, she believes in engaged citizenship and a desire to use her intellect and abilities in service to our campus, our community, and ultimately our world. She will be a great leader for the rest of her adult life.”

When asked what advice she would have given to herself as a freshman, Mistrot replied, “The transition is hard. It’s hard for everyone. It gets better. Everyone here wants you to succeed. Trust the process. All your dreams come true.”