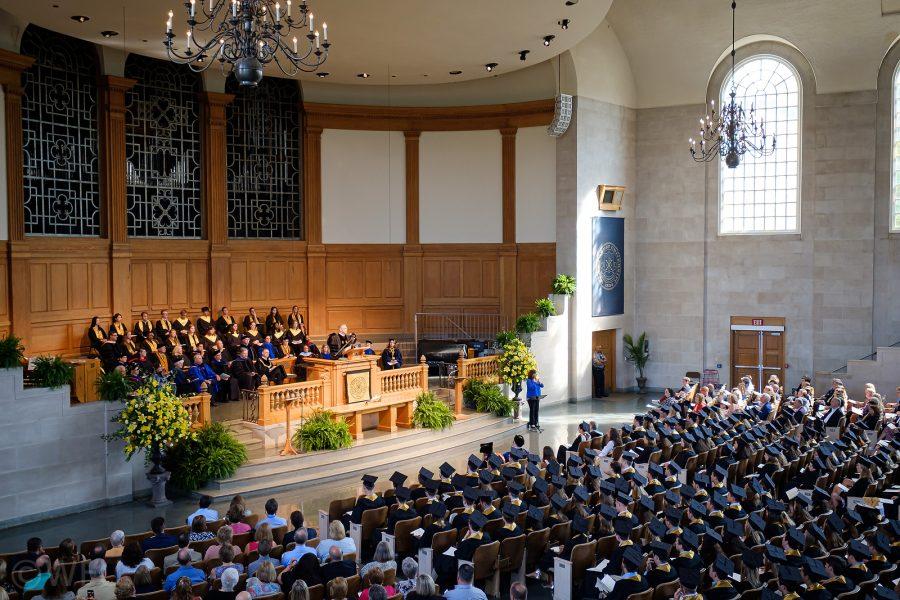 On Sunday, May 19, members of the Wake Forest class of 2019 and their families gathered in Wait Chapel for the Baccalaureate service, a special one-hour religious service to honor the graduates.

Music played softly and then filled the chapel as the graduates and attendees sang in harmony and in celebration to religious hymns. Combining religious reverence and the honor of graduation, the service included a scripture reading followed by a prayer for the class of 2019.

The highlight of the service was the Baccalaureate speech delivered by Gary A. Haugen. Haugen is the CEO and founder of International Justice Mission (IJM), an international organization that protects people from violence throughout the developing world.

President Nathan O. Hatch commented on the wisdom that Haugen was able to offer to students who are preparing to graduate and confront issues in the real world.

“Haugen’s fight against human trafficking is based on his conviction that compassion can alleviate the suffering of the world’s poorest people,” Hatch said. “As our graduates prepare to go out into the world, his work offers an inspiring example of Pro Humanitate in action.”

Speaking to the inspirational aspect of service, Haugen explained that his work with IJM has renewed his faith in humanity. He noted how the social workers at IJM confront circumstances of misery and heartbreak each day with a refreshing and courageous approach to social justice.

Haugen also challenged graduates to follow these tenets of the Pro Humanitate spirit through personal endeavors of passion projects and surpassing the minimal requirements or the foundational completion of nine-to-five job. He focused on the predominant purpose of finding true satisfaction through gratifying work.

Graduate Haley
Westervelt commented on the impact of his message to embrace this next stage in
life joyfully without being bogged down by dwelling on the imperfections
inherent in the human world.

“The Baccalaureate address challenged me to approach life after college with a pursuit for joy and freedom, even in a world that tells me I must be a slave to its demands for perfection,” Westervelt said. “Haugen and his organization model that even in the midst of a broken and suffering world — and he’s surely had more exposure to the evils of the world than I have — [demonstrated] that we can only truly combat those evils by embracing and exhibiting the great joy that is offered to us.”

Haugen also implored the graduates to move beyond the fear of failure in order to courageously take a risk at something worthwhile.

Haugen quoted Bible scripture, saying, “For God has not given us a spirit of fear, but of power and of love and of a sound mind.”

Through recounting his personal experience of founding a not-for-profit organization focused on charitable work, Haugen challenged the graduates to also draw upon inner reserves of courage in order to diminish the power that fear has to inhibit the progression of life. He had seen and fought against injustices as both a human rights attorney for the U.S. Department of Justice and as the director of the United Nations’ investigation into the Rwandan genocide before establishing IJM in 1997. He empowered graduates with the knowledge that each person has a human capability to impact the world in a positive way.

Focusing on enjoying one’s life and passions, Haugen’s message to the graduates was especially fitting for those who have strived for academic achievement in the “Work Forest” environment for years and were finally able to celebrate the ultimate accomplishment of graduation and how far they have come.

“His point about enjoying life and all it has to offer is something that busy people, especially recent college graduates, can forget, so it was refreshing that such a role model was reminding us to truly live as well as do what we love and work hard,” said graduate Rachel Schwam.

The Baccalaureate service continued with a final hymn, “Go to the World.” The verses musically echoed the themes of Haugen’s speech, symbolizing the passage from Wake Forest into the world that the graduates would at commencement.

During the graduation
exercises, Wake Forest will confer the honorary degree of Doctor of Humane
Letters to Haugen in recognition of his dedicated advocacy to social justice
and work at IJM.