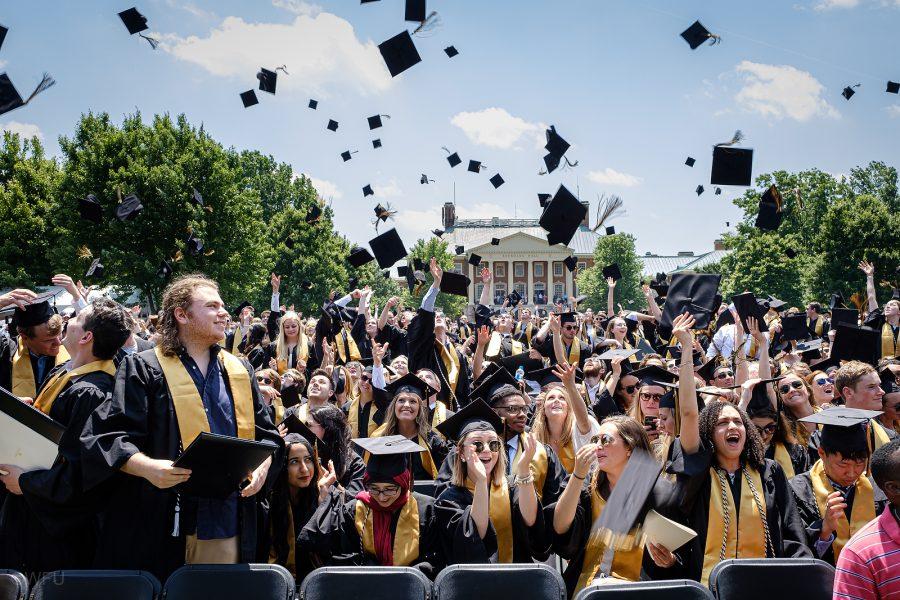 13,000 chairs. That’s how many seats were on Hearn Plaza for Monday’s commencement ceremony, set up for graduates, faculty, staff, family and friends.

Out of a total of 1,982 students graduating, 1,190 undergraduates received diplomas, marking the culmination of four years of undergraduate academic studies and lifelong memories at Mother So Dear.

These graduates now enter the workforce, attend a myriad of graduate schools or pursue other endeavors as they enter the world outside of the “Wake Forest bubble.”

In this vein of thought, President Nathan O. Hatch, in his speech, implored the graduates to “stop, look, and listen” as they enter into this constantly moving and technologically focused world.

Hatch explained that
this involves personal development of a self that is both reflective of one’s
inner life and empathetic toward others. Through this focus on personal
development, he also outlined the importance of distinguishing between “what is
story-worthy” and what is not.

To expound upon this theme of finding veracious narratives and following honorable pursuits in life, Hatch invited Frederick J. Ryan, Jr., publisher and chief executive officer of The Washington Post, to the stage to deliver the commencement address.

“A major innovator in digital communications both at Politico and The Washington Post, Ryan is an outspoken advocate for the free press both at home and abroad,” Hatch said. “In the aftermath of the murder of Jamal Khashoggi, he has repeatedly challenged world leaders to recognize that threats against journalists are threats against freedom.”

Ryan, who also co-founded Politico and served as Chief of Staff for former President Ronald Regan, focused on the challenge he described as the “search for truth in the fake news era.”

Opening his address, Ryan remarked upon the honor of returning to Wake Forest, where he watched his own daughter graduate three years ago. He joked about paying off any open tabs at Last Resort and about his parental concern about the misleading name of the “Shag on the Mag” event.

Fake news is not a
phenomenon unique to this age or generation, Ryan explained. The first instance
of misleading information was reported in 1777, when fake letters purported to
be by George Washington were circulated.

“The overall advice was to always find the truth in both situations we’re put in and information we’re reading, which didn’t seem like typical commencement advice for us, but seemed very meaningful as we go into a whole new world of unknown,” said graduate Megan Clarke.

Commenting on the cultivation of academic skills like analytical thinking, research, and a strong work ethic that a Wake Forest education comprises, Ryan noted that Wake Forest graduates are at a remarkable position as they enter this technological age in which they will have to navigate ever-evolving innovative digital realms and contend with the implications for news and the truth.

“Over time, we’ve seen advances in technology follow a pattern,” Ryan said. “One generation discovers the science; the next generation contends with the consequences. Your generation inherits the task of balancing digital technology’s promise against its peril.”

Ryan also explained the political challenge facing society grappling with fake news. This is a particular problem for the United States, for, as Ryan described, the president has publicly attacked the press as the “enemies of the people.”

“Regardless of who we are, where we work or what party we support, we can all commit to safeguarding and honoring the truth,” said Ryan.

He further explained that one must carefully distinguish between opinions and facts in order to uncover a truthful account of reality, a process that involves seeking information, rather than the affirmation of a predetermined belief or belief system.

“Think critically about your news sources, and understand the line between facts and opinions presented around those facts,” said Ryan. “If you find yourself in an environment where no one challenges your understanding of the world, move around until you find people who will.”

For graduate Julia Haines, former Editor-in-Chief of the Old Gold & Black, Ryan’s speech echoed her own experience as a student journalist.

“It takes unwavering commitment to integrity and a healthy degree of critical thinking to find the truth among rumors and hearsay,” said Haines to Wake Forest News.

Ryan referenced the recent and tragic death of The Washington Post opinion columnist Jamal Khashoggi, who risked his life uncovering and telling the truth about the political corruption and abuses of power in Saudi Arabia. While graduates may not be facing life-or-death situations in foreign countries, they can still respect the truth and those who uncover it while also diminishing the influence of fake news in society.

“Allow me to offer some advice that will apply to all of you, everywhere — whether you become a journalist, teacher, lawyer, doctor, artist, consultant, or entrepreneur,” said Ryan. “And that is: embrace your role as a seeker and a steward of the truth.”

Having spoken not only
about the graduating class’ accomplishments, but also about life outside of
Wake Forest, Ryan’s speech proved useful for graduates.

“His commencement
address left us with great advice on how to navigate and be a good citizen of
the world,” said graduate Becky Swig.

As one of seven scholars
receiving honorary degrees from Wake Forest this year, Ryan was also hooded as
a Doctor of Laws for his leading efforts at safeguarding the truth in the news
and the media.