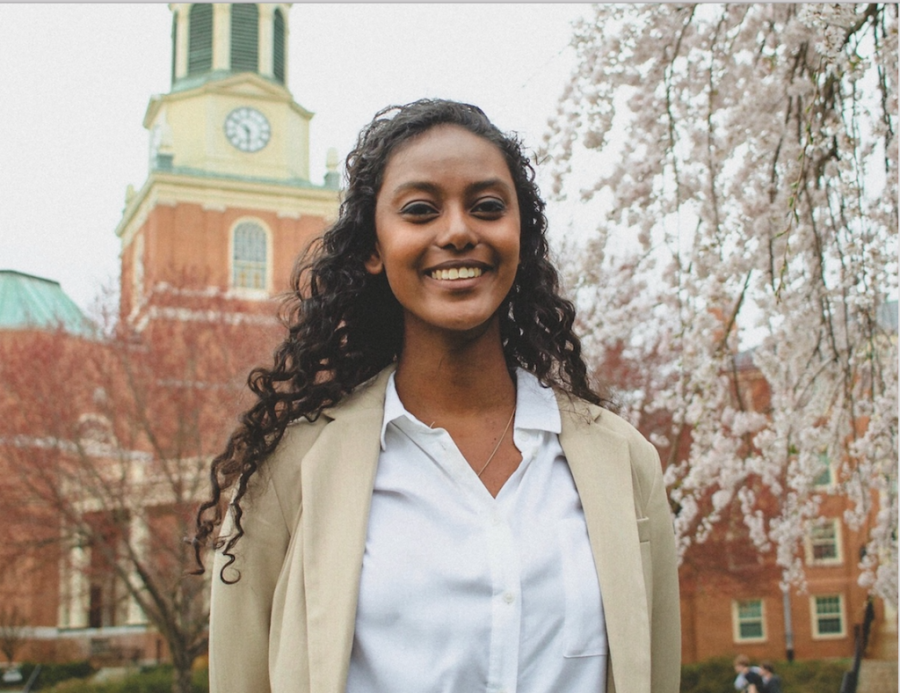 Senior Mellie Mesfin will serve as the Student Government president for the 2019-2020 academic year. She is a Business and Enterprise Management major with a concentration in business law and a minor in sociology.

What was it like to run for the position of Student Government President?

From the work perspective, I don’t think I was scared of what it was going to be like. I knew it was a lot. The mental picture I had of what it was going to become has matched up to what it has been. So, I think I did a good job of mentally preparing for that during the election. I personally knew, even if some others didn’t have that faith initially, that I was really well connected to the student body. I was involved with so many groups that I felt confident in my abilities and relationships to bring those forward into the job. From that perspective, it was nice to learn about Student Government and the intricacies about it and see what’s happening because it’s always been that way with the student body.

The actual process of that week and a half was pretty hellish — not going to lie, I didn’t sleep much and didn’t eat much — but obviously, I think it was worth it. It was really cool, honestly, to see the support that came out that I didn’t expect. I think it was really cool and that showed me the breadth of my relationships and made me even more grateful for those people and for having had them in my life so far.

[As for] the technical pieces of it …  that was kind of difficult for me to come out of my natural place, which I think is letting my work speak for itself. My dad always told me that if we are going to get things in life, it should be by our own merit, not by the fall of others. So, some people I knew running beforehand and some I didn’t. Overall, I pushed this message that I don’t want people talking negatively about anyone else. Not only is that a campaign rule, but I don’t think that’s an ethical way to win anything in life.

Are there any specific components of your campaign that you aim to focus on this year?

My campaign was three-pronged, the first piece being really internally Student Government-related. I think we’ve already begun that even in our appointing process. When we were appointing people, we decided whether these people were going to be proactive. As freshman Student Government elections come up and it comes time for Student Government senate appointments, we’re also looking at who’s in the room and who’s not in the room and actively seeking out the voices of those not being represented and not waiting for them to come to us. So, that’s already been in the process, and we’ve been working on building networking sheets with different student leaders around campus to make sure we’re really plugged in. I think being active and engaged in Student Government has already been well on its way, and it’s been really nice to see how many people internally want that exact same thing.

On the piece of diversity and true inclusion, it’s been nice that the school is also shifting its focus to be in a similar position with the new commission and committees that President Hatch announced. I’ll be serving on one of them and definitely keeping close tabs on what’s going on in the other ones. Some things that I’ve also been focusing on within diversity and inclusion is looking at the bias resports and seeing how that process works. I’ll be meeting shortly with leaders in that field to talk about what happens and why it happens. This is where students are feeling short-changed. We can see how we can help this and what’s part of the process, while also doing our best to communicate these truths so they don’t just feel left in the dark. Also, I’m hoping to talk to admissions about how they’re recruiting students and how we can increase diversity later on down the road and in years to come. I’ve also been building my relationship with the Student Government President of WSSU (Winston-Salem State University).

Is there anything that surprised you when you stepped into your role?

Yeah, the social component honestly has been the most surprising piece. It’s very different beforehand, I think, because I walk around campus and I see people I know and if someone’s looking at me with this vague recognition, it’s probably because we had a conversation once in a friend’s dorm or they’ve been in a class of mine — not so much anymore. Obviously, that still happens, but there’s a lot more recognition and awareness of people that I don’t know who know who I am, so that’s been really odd. I’m used to walking around and having anonymity — that doesn’t quite exist as much anymore. It’s been a little challenging to kind of get used to, because I think I prefer to fly under the radar. But, I tried to look on the bright side of that. Now, at least if people know who I am, when I’m just walking around and if I’m walking to class, someone could stop to walk with me and talk about something, like, “I don’t know what to do about this, but I know you’re involved with Student Government, maybe you could do something.” Beyond that, it’s been really nice to see how many people within the faculty and administration that I’ve been able to have conversations with that have been fairly transparent and fairly honest, from my perspective.

With all of the new attention, is there a central message or any pieces of advice that you would like to impart to the student body?

On the message front, if I could say something to everyone, one is that I really do want to help speak for students and advocate for students, but I also would love for people to reach out to me and come talk to me and see me as really accessible. I see myself as a fairly friendly person, so if someone sees me or wants to talk to me, shooting an email or a text, coming by office hours or whatever way works for others, I truly don’t ever think I’ll say, “No, I don’t want to talk to you.” See me as accessible, whether it’s, “I have a question about this, do you have the answer?” or “This is something that’s really been troubling me. I don’t know how to get it resolved” or even just someone to talk about frustrations with.

[For] advice, something that’s really big for me that I’ve learned in college is to be intentional. Don’t just do things because that’s how they’ve always been done. Don’t accept the fact that I’ve been here for two years, so that’s how my experience at Wake Forest always will be and these are who my friends are. Take a really active role and make it the life you want for yourself.

That’s how I ended up in this position — I looked around at my life and what I was engaged in, and I said, “Is this what’s best for me? Is this the most that I can do for myself?” And the answer was no. So, I went out there and I was like, “I’m going to change that, and this is the life that I want and I’m going to try to become the person that I want to be.” I think that being really aware of that, being both self-aware and intentional, is one of the best things you can do at college and beyond. That’s the way to be satisfied with your choices at the end of your four years.