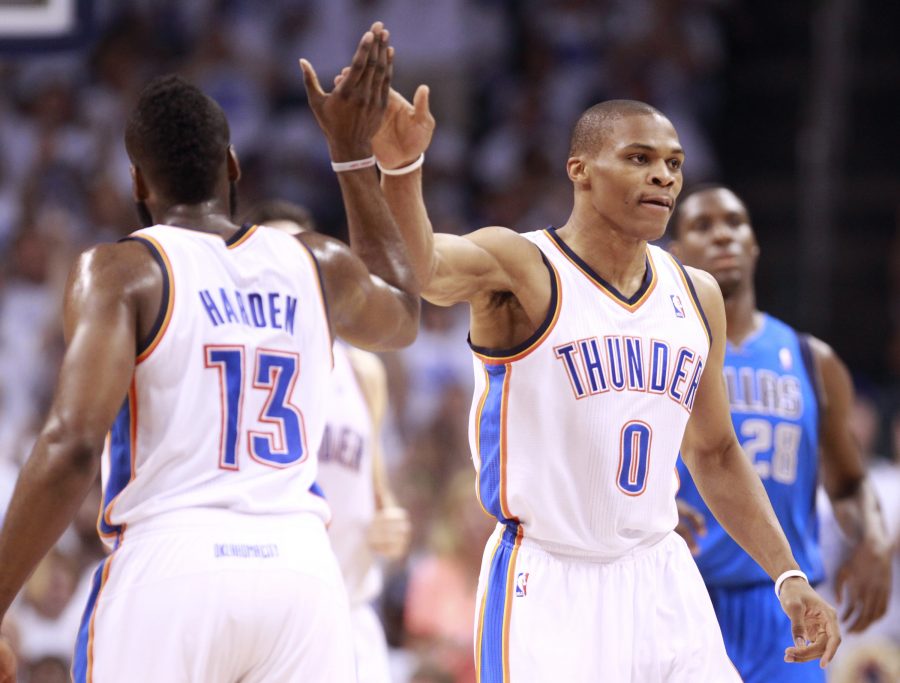 For NBA fans, the 2019 summer offseason trades and player contracts/extensions have left the the NBA landscape feeling entirely fresh and full of possibilities. All-stars Kyrie Irving and Kevin Durant look to be one of the biggest superstar duos the league has ever seen once Durant returns from a ruptured right Achilles tendon. With Anthony Davis being traded to the Lakers to be paired up with LeBron, a new pair forming on the Clippers in Paul George and Kawhi Leonard and many other pairings it seems that superstar duos are the way to go in the league now.

Despite all the glimmer and hype that these duos have generated, not every newly-formed duo has as  bright of a future as the ones residing in Los Angeles. The new duo under scrutiny is formed by former Thunder superstar Russell Westbrook who joined James Harden in Houston. One word haunts the careers of both Harden and Westbrook: inconsistency.

Harden has cemented himself as an MVP-caliber regular season player that can lead a top-seeded team in the stacked Western Conference. But, as the playoffs have shown us over the years, his production and efficiency considerably dips during postseason play. In the 2016-2017 postseason, one that saw the Rockets take the reigning champion Warriors to the brink of elimination in a seven-game series, Harden’s game was brilliantly complimented by players like Eric Gordon, Trevor Ariza and Gerald Green. Ariza averaged 44 percent on his pull up 3-pointers that postseason and Gordon averaged 47.7 percent per NBA stats on catch and shoot opportunities beyond the arc. Part of what made Houston’s offense so successful during the 2016-2017 regular season and playoffs was that Harden was surrounded by lights-out shooters who were ready to shoot and spread the floor. He also had a surprising spark plug addition to the team in Gerald Green.

Flash forward to 2019, and Harden was playing much more isolation ball and did not have the same kind of sharpshooting core around him. This made Houston’s offense come to a complete standstill as Harden tried to flounder his way to a foul or burp up a wasted shot opportunity.

The real issues for the 2019-2020 season will be who, between Westbrook and Harden, will take the ball handling responsibilities, and will Westbrook be able to step up and improve his 3-point shooting percentage? Westbrook’s overall 3-point percentage for the playoffs in 2019 was an abysmal 33 percent, per NBA stats. His issue is simply that he takes too many risky shots early in the shotclock. His issues are not limited to the 3-point line either, with his overall field goal percentage being a sad 36 percent. He has the energy and intensity to be a great addition to the team if he gives his all on the defensive end and plays much smarter and more team-oriented on the offensive. However, it’s hard to say whether Houston will be able to overcome Westbrook’s negative tendencies and persevere, but a change of pace and scenery could be good for him.