Madre de Dios’ Plan To Save The Amazon 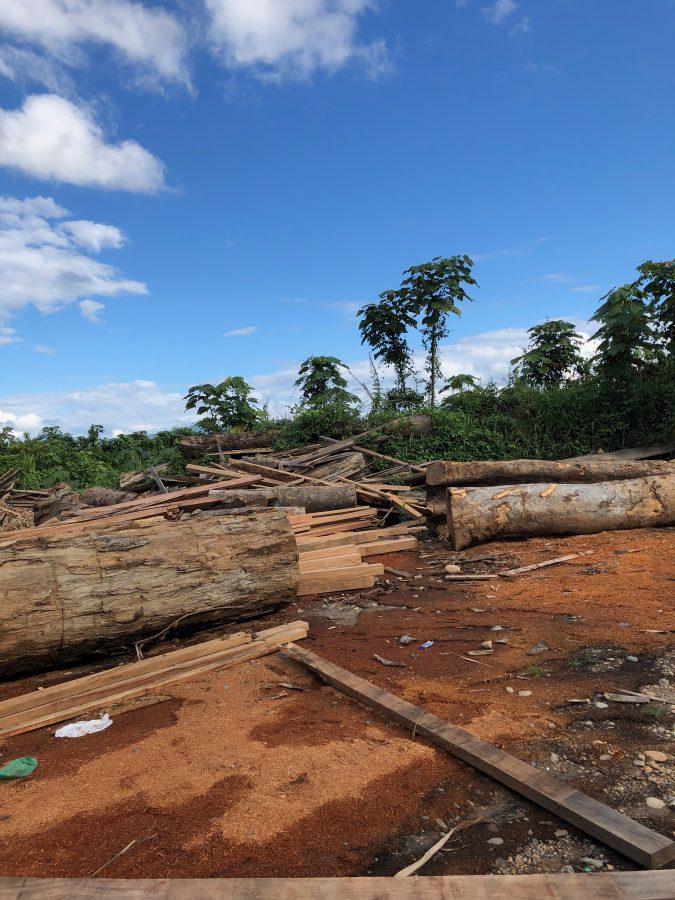 The air is hot and sticky. Roots a foot high protrude across the trail. Above, a maze of leaves comprises the rainforest canopy.

After trudging two hours through muddy streams and overgrown trails in the Peruvian Amazon rainforest, Wake Forest undergraduate students reach an impasse. In front, a mesh of intertwining palm leaves partly shades a view of the Manu River. Using the palm trunks as guides, the students carefully maneuver their way down the slippery decline onto the shore alongside the flowing water.

Endless rainforest lines both sides of the river. Scarlet macaws fly overhead. One student points to a large tree across the river, drawn by the sound of rustling leaves. A fruiting fig tree across the river is an oasis during the peak of this dry season, according to Wake Forest biology professor Miles Silman. A variety of bird and primate species, such as capuchin monkeys and white-throated toucans ravage through the fig tree’s top branches.

“You are currently standing in the largest remaining tropical wilderness on the planet,” says Silman, as the students stare through their binoculars, trying to catch glimpses of the feeding frenzy.

Less than 24 hours prior, the group spent two days travelling down the Manu to reach Cocha Cashu Biological Station, a world-renowned field site located in Manu National Park in southern Peru. No roads jut through the endless carpet of green vegetation. The only way to reach this pristine landscape is a two-day journey on a narrow, wooden boat.

With little human impact, Manu National Park is regarded as a biodiverse hotspot in which over a 1,000 species of birds exist and interact alongside over 1,300 species of butterflies and over 160 species of mammals. From the lone jaguar, to the group of tapir, to the endless line of army ants, down to the nutrients cycling throughout the soil, this complex ecosystem depends on the ability of each layering component and process to function without disturbance.

Maintaining the balance of this ecosystem is not only vital to support Manu’s biodiversity, but is also necessary for offsetting the impact of global climate, according to tropical biologist John Kricher. In a recently published article, Yale School of Forestry and Environmental Studies estimated that the forests in the Amazon basin store 90-140 tons of carbon. By intaking vast amounts of carbon dioxide, plants in the Amazon rainforest help reduce the rate of global warming.

While traveling down the river allowed the students to observe the immense flora and fauna that thrive in this ecosystem, it also exposed the students to the stark reality of the current threats this biodiverse hotspot is facing.

Piles of stones and pools of contaminated water become a part of the landscape farther down the river, replacing pockets of rainforest where lush trees once stood. Illegal mining has plagued the region of Madre de Dios since the price of gold increased from $1,000 per ounce to $2,000 per ounce in 2008, according to Peruvian tropical biologist Cesar Ascorra.

After 10 years of illegal mining, the damage has been done. One hundred and fifteen thousand hectares have been deforested in Madre de Dios, according to Ascorra. That is 20% larger than all of New York City. Mercury from the mining has entered the soil and water, causing a massive public health crisis for the local population, according to Claudia Vega, coordinator of Peru’s one and only mercury lab.

“We are destroying the planet at a rate faster than the Earth’s natural processes can handle,” Silman said. “The question becomes what is the world we want on the other side?”

For many people in Madre de Dios, the destruction has not eliminated all traces of hope. Policies and projects are being formed to ensure the world on the other side has a protected and sustainable rainforest.

At the start of 2019, the Peruvian government issued a six-month state of emergency, Operation Mercurio, in Madres de Dios, according to a Guardian article published in March 2019. 1500 police and military officers raided the region with orders to shutdown illegal gold mining. An estimated 40,000 illegal miners worked in La Pampa before the raid, and of that number, most have since left the region seeking work in other areas or started mining legally, according to the current Governor of Madre de Dios, Luis Hidalgo Okimura.

When Okimura took office in January 2019, he was unaware of the national government’s plan to raid La Pampa; however, he regarded Operation Mercurio as a “necessary step” in the intervention process.

While most of the illegal mining has been shut down, the aftermath still remains.

“There is an economic recession in Madre de Dios,” said Okimura. “It’s visible that hotels, restaurants and other businesses that were used by people who had money from illegal gold mining have come down tremendously throughout the whole region.”

Tourism has also dropped by 40% since the start of Operation Mercurio, according to Okimura.

Now as the state of emergency comes to an end, the governor is faced with the impending challenge of how to rebuild the region’s economy.

Okimura is one of the first governors in over 10 years with reforestation on the forefront of his political agenda. After spending 25 years living in Brazil and witnessing how the state of Acre established sustainable reforestation and economic practices, Okimura offers a refreshed and hopeful perspective.

“My idea since taking office has been to open the door for NGO’s so that Madre de Dios can receive funding [for sustainable practices],” Okimura said.

Part of his economic vision for Madre de Dios is based on increasing exports of Brazil nuts and cacao, while also attracting higher influxes of tourists to the area. At the end of May, Okimura met with Chinese business delegates in Nanchang, China to promote Madre de Dios as a biodiverse travel destination.

Currently, mining accounts for 60% of the Madre de Dios economy. Hidalgo hopes that by increasing exports and expanding tourism that number will decrease to 40% by the end of his first term.

While Okimura offers a new economic perspective, many of the current mining policies remain vague. For example, the national government of Peru requires legal miners to reforest mined land; however, the law does not specify how the reforestation process needs to be executed.

Although Okimura discussed the importance of reforesting mined lands, he was unclear regarding the details of the reforestation process. He was also unsure about who would enforce closure policies and guarantee miners actively fulfill reforestation requirements.

How to grow a rainforest 101

The first step in rebuilding a rainforest is identifying where the reforestation process needs to occur. By flying drones over mined areas, geographic information systems (GIS) specialists at CINCIA, the Center for Amazonian Science and Innovation are able to digitally map out where new trees need to be planted, according to GIS specialist Jorge Caballero.

As the drone team compiles the maps, scientists working in CINCIA’s nursery and experimental tree plots research what types of tree species will survive in the soil after it has been mined and depleted of nutrients. 74 different plant species, native and exotic, have been tested in experimental reforestation plots that span 42 hectares, according to Reforestation Technician Jesús Alférez.

One species that has proven to be especially successfully is eucalyptus. A fast-growing Australian gum tree, eucalyptus offers environmental and economic values. Within one year, some of the eucalyptus trees grew up to 45 feet, and within 10 years, miners can cut down the eucalyptus and sell the wood, according to Alférez.

“Miners are more interested in reforestation when you explain that the species will eventually generate profit over time,” Ascorra said. “We are incentivizing reforestation.”

When Wake Forest biology student Cameron Munley asked the reforestation team about the potential risks of bringing in non-native species, Alférez acknowledged that while eucalyptus leaves release toxins that harm other plants, the eucalyptus seeds cannot spread on their own. As a result, the team does not plant the eucalyptus near native species.

While new species are tested out in the experimental plots, the successful seeds are mass planted in the nursery, the production site for supplying a mined area with the number of trees it needs to become reforested. That number is 1,100 plants per hectare, according to Ascorra.

Along with researching tree species, scientists at CINCIA are also working on ways to revitalize degraded soil. Using organic materials, such as Brazil nut husks and sawdust from timber mills, scientists produce biochar, a sediment that removes heavy metals, such as mercury, from the soil.

“We can clean the [contaminated] area around the plants with the biochar,” Ascorra said.

By absorbing toxic materials, the biochar restores the soil’s nutrients and water retention capacity, according to Duke University graduate student and biogeochemist Jaqueline Gerson, who studies the impact of mercury on the environment.

CINCIA is now trying to provide Madre de Dios locals with a simple and cheap way of making biochar. The most successful method is filling Brazil nut husks in metal drums and setting the organic material on fire. 45 small holes are punctured at the bottom of the drum to eliminate all carbon emissions during the production process.

Through outreach programs organized by CINCIA’s Communications Department, this method is being shared with legal miners as well as the Association of Chocolate producers in Madre de Dios, according to Ascorra.

Peruvian indigenous leader Walter Quertehuari dreams that one day “the value of a standing forest is higher than the value of a forest destroyed.”

CINCIA is trying to turn that dream into a reality.

“The most important thing is that you have seen something really negative, mining, but you have also seen an opportunity for change,” said Martha Torez, who works in CINCA’s Program of Education and Communication. “You don’t have to leave sad. There is hope.”