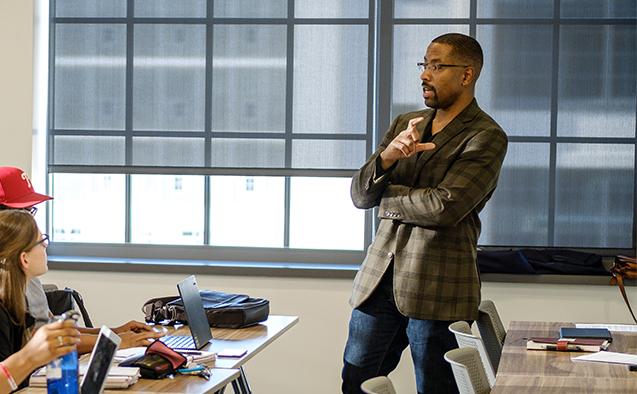 Corey D. B. Walker, a visiting professor of leadership studies and the humanities at the University of Richmond and a former dean at Winston-Salem State University, delivered an address titled “My Skin as Legacy: Towards an Ethics of Slavery, Race and Memory” on Wednesday in the Porter Byrum Welcome Center.

Walker’s speech was the first part of a new lecture series that is a part of Wake Forest University’s Slavery, Race and Memory Project.

This series advances Wake Forest’s commitment to exploring issues of race, along with the university’s recent launch of the Slavery, Race and Memory Project website and earlier decision to join the Universities Studying Slavery consortium.

The co-chair of Wake Forest’s Slavery, Race and Memory project, Kami Chavis, introduced Walker’s speech by commenting on the purpose of the lecture series and the project.

“It is important to understand the university’s relationship and linkages to slavery because they can and do have implications for today,” Chavis said.

Centering on this issue of delving into Wake Forest’s history pertaining to racee, Walker began his talk by looking at the way in which students at Wake Forest have held discussions about race and slavery in an academic environment in the past.

Walker reminded the audience of the institution’s relations in respect to slavery, citing a series of conversations about the ethics and politics behind slavery and race that students conducted on Wake Forest’s campus between 1840 and 1860.

Many of the questions that students posed then, like one asking whether it was probable that slavery could be abolished in the United States, were answered resoundingly in the affirmative. This was intended to demonstrate a primary commitment to talking collectively about issues of slavery and moving forward to a more human-centric model of higher education.

Continuing this historical call to action, Walker encouraged students, faculty, and other members of the Wake Forest community to confront the concept of race within academic institutions.

“The question of slavery is not new, but rather one that is deeply engrained within the fabric of the institution,” Walker said.

To respond to this issue, Walker explained that the university must express willingness to probe the complexity of race and intentionally take steps toward resolving outstanding issues.

Walker also intimated that talks and consortiums that examine race and the history of slavery are powerless without the moral resolve and determination to attack the institutions that perpetuate racial inequality and injustice.

He corroborated this argument by citiring W.E.B. Du Bois’ work, The Suppression of the African Slave Trade, and explained that African-American history has demonstrated that “the failure to suppress the African slave trade was due to unwillingness.”

To advance from this historical state of indifference to a modern one of compassion for humans of all colors and races, Walker advocated for people begin to think about the diverse and complex meanings of slavery, race and memory within the context of American institutions.

Walker then referenced Life of William Grimes as a work that forces Americans to reconcile the American notion of liberty with that of slavery, challenging the audience to ponder the vestiges of slavery and questions surrounding race within the context of American society.

“[This work] forces a confrontation with the very flesh of slavery, the flesh of the Constitution and the flesh of the nation,” Walker said. “The flesh constitutes the horizons of the new political community.”

In this respect, Walker promoted an ethical discussion of slavery and race that is human-centric and embraces the multi-dimensionality and complexity of blackness.

To exemplify this goal, Walker showed a video and commended the work of Arthur Jafa for “forcing us to see the flesh and not the bodies” in a representative art form that brought elements of humanity into the discussion of race.

Expanding on this principle of aesthetic and ethics, Walker explained that academic institutions like Wake Forest are tasked with “creating and curating a critical space for ethical responses to the flesh.”

Walker’s vision of studying and responding to the institution’s history of race and slavery inspired the audience, leading the audience to give him a standing ovation.

One of the attendees, junior Jenn Ryan, pointed toward the realistic implications as one explanation for the resonance of Walker’s speech.