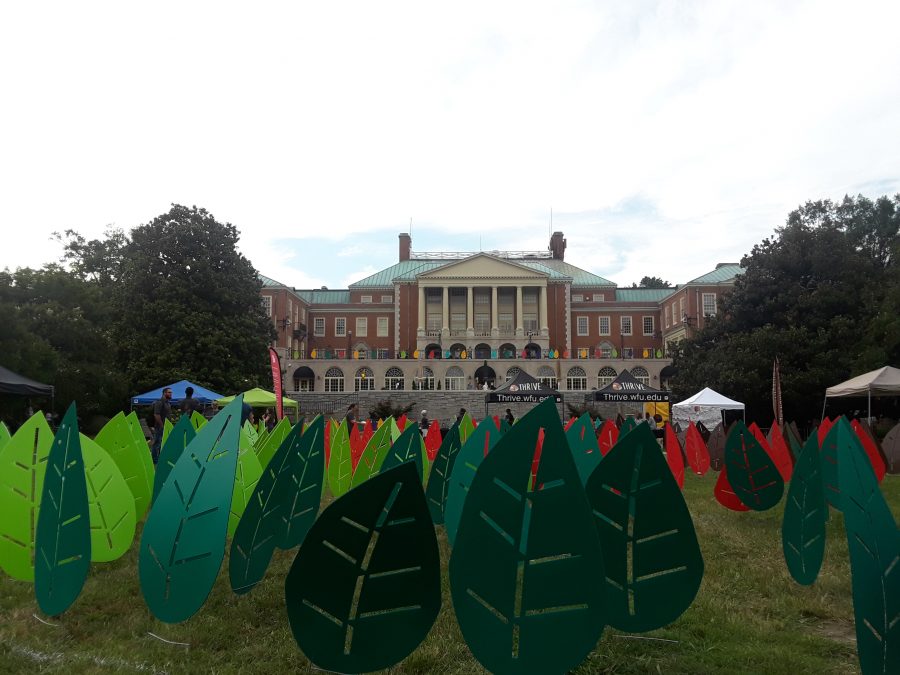 The Wake Forest Office of Wellbeing’s Thrive initiative celebrated its fifth anniversary on Wednesday. Arrive and Thrive was an empowering and exciting event held for students, faculty and staff on Manchester Plaza featuring a dunk tank, food and dogs.

“Our work supports everybody in the campus community, students, faculty, and staff, to show up fully,” said Malika Roman Isler, director of Wellbeing. “I’d say our mission is really to provide the opportunities for people to know more, and know better, and have the skills and resources to care for all of who they are while they are members of this community and beyond.”

Roman Isler characterized the initiative’s development and introduction in 2014 as the next logical step for any elite academic institution to make.

“This is supposed to be the time of life when people are expanding their ways of thinking, their exposures to new ideas and contributing to the development of those ideas in others,” she said. “What better time to give people the space to create who they are and to have support from an institutional level than while you’re in college?”

Thrive’s iconic logo, a leaf composed of eight differently-colored pieces, represents the eight distinct categories of its wellbeing focus: emotional, environmental, financial, intellectual, occupational, physical, social and spiritual wellbeing. Since its inception, it has offered over 953 programs and partnered with more than 145 offices, departments and organizations.

Roman Isler said that she was especially proud of their Peer Education initiative, a program in which students would educate other students about Thrive’s goals, thus developing leadership and community between them. Over 80 students have gone through training. She characterized students’ responses to Thrive as overwhelmingly positive, a sentiment measured largely through a multitude of surveys, administered to students before and after Thrive programs to measure development in knowledge and skills. She also said Thrive participates in the National College Health Assessment every other year.

While Thrive’s initiatives have been largely successful, Roman Isler also clarified that some are more difficult to reach. She said many students still are unaware of the Office of Wellbeing’s activities, a sentiment shared by students.

“I saw the signs,” said senior Liam DeStefano. “I saw the signs and advertisements all over campus, but I never really engaged with what it entailed. I would just see the logo around.”

DeStefano said he first learned what Thrive was when he attended Arrive and Thrive on Wednesday. He speculated that he would have been more likely to be engaged if he didn’t have such a busy schedule.

Roman Isler recommends that students should do their best to learn about Thrive.

The Office of Wellbeing is currently located in Reynolds 321.However, it may not be there forever. The organization is currently in the midst of some major structural and strategic changes as of July 1, under the new leadership of James Raper, from the University Counseling Center. Roman Isler said she was not able to discuss specifics about the future, as they are currently in development.

Although Thrive’s future may be in doubt for some, many remain optimistic.

“This is a time of great stress for college students. It has been wonderful to see our Thrive program flourish and provide models of integrated living for students, staff and faculty,” said President Nathan Hatch during a speech at the Arrive and Thrive event. “This is a wonderful day.”