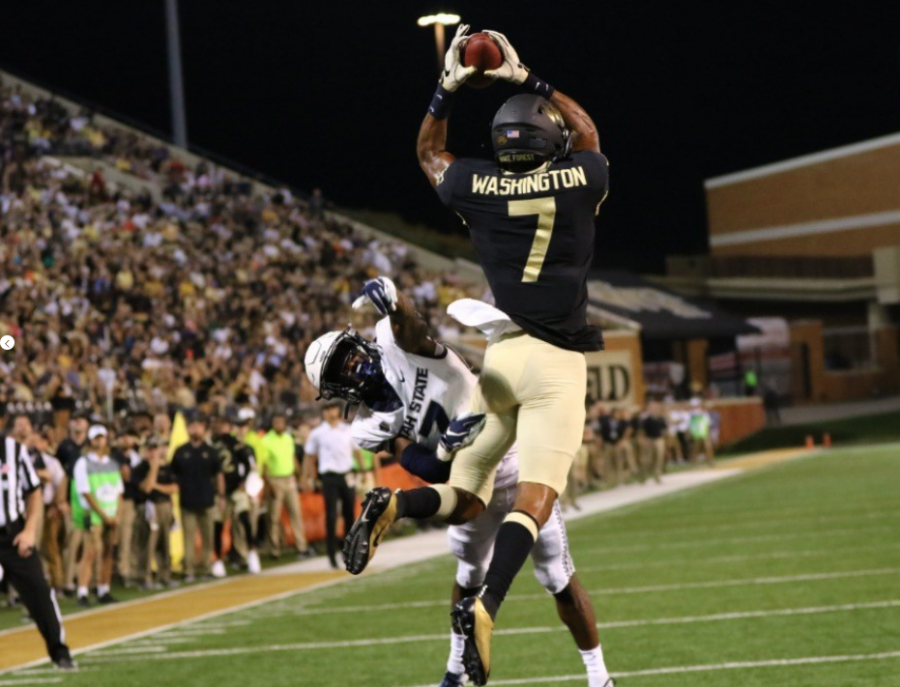 Long before the kickoff, you could hear the anticipation buzz at BB&T Field for the Demon Deacons’ opening night clash against Utah State. Tailgate tents took over the parking lot, the freshman class raced down the football field and the excited “ohhhh” that followed the kicker as he runs to start a brand-new Wake Forest football season.

After just one game in, the Demon Deacons and Head Coach Dave Clawson have been living up to the expectations.

Friday night was a back-and-forth affair that saw the lead change hands nine times throughout the game. The Deacs started the game well, scoring a touchdown on a 22-yard reception by sophomore receiver Sage Surratt. Quarterback Jamie Newman, in his first season as the Deacs’ starter, was comfortable in the pocket, completing all three of his passes on the opening drive for 42 yards and the touchdown.

However, after Utah State tied the game with a seven-yard touchdown run by running back Gerold Bright, the Deacs had a hard time finding their rhythm offensively. On the following four possessions, Wake Forest had two turnovers (a fumble by Newman and a turnover on downs), a punt and only a field goal to show for. The lack of offensive production came from miscues at critical points, as the Demon Deacons were able to move the ball well but did not capitalize on promising drives.

Out of the Deacs seven red-zone trips  in the game, two saw them leave the field empty-handed due to turnover on downs after multiple failed attempts to punch the ball in for a touchdown.

“We made a ton of mistakes tonight. There’s certainly a part of me that feels like we didn’t deserve to win that game. We gave up so many big plays on defense. Offensively, our short-yardage package was completely ineffective. But we hung in there,” Clawson said during the postgame conference.

Hanging in there certainly feels like an appropriate description for the Deacs’ performance on defense. Although they allowed a lot of explosive plays by quarterback Jordan Love, who finished the game with 416 yards and three touchdowns, the defense seemed to show up in the most critical moments, forcing a turnover on downs and intercepting Love three times.

“Their quarterback [Love] is a tremendous player and [Utah State’s] a good football team. [Utah State] was physical and we were not moving them [in the trenches] and they’ve got good skill. Their offensive line, I thought played really well,” Clawson said. “You gotta give a lot of credits to our guys for just the way they keep fighting and keep competing, and I think that is a trademark of Wake Forest football.”

Newman also echoed his head coach’s sentiment on his team’s resiliency after the come-from-behind victory.

“I think this is a testament to our toughness. We just keep fighting until the end. That’s what our identity is. Deacon tough just keeps fighting,” Newman said.

Newman finished the game with 401 yards and three touchdowns while completing 72% of his passes in what was another great showing for the redshirt junior.

But, no performance on Friday night embodied the “Deacon tough” mentality more than Kendall Hinton’s.

Hinton was originally recruited to play quarterback for the Demon Deacons, but after three years of personal problems, injuries and sitting behind alum John Wolford, Hinton decided to make a switch to wide receiver in 2018 to earn more playing time. It was a season full of ups and downs for Hinton, who was mostly featured as the backup to break-out, All-ACC receiver Greg Dortch. Hinton considered transferring from Wake Forest at the end of the 2018 season and entered the NCAA transfer portal, almost assured of a move out of Winston-Salem. Ultimately, Hinton was convinced by Clawson to come back for his last year with the promise of a better year in 2019. Thus, the Utah State game was made pivotal for Hinton and his career at Wake Forest.

The Deacs received the ball back with 2:19 remaining on the clock, trailing by four points, having to move the ball 89 yards down the field with no timeouts remaining.

After an incredible 70-yard catch-and-run by Surratt, the Deacs found themselves at Utah State’s one-yard line with four opportunities to knock it in for the much-needed touchdown. It seemed like a given that Wake Forest was going to score. However, their earlier short-yardage problems came back to haunt them, as running back Cade Carney tried three times to run the ball up the middle and three times found a blue-and-white wall to stop him.

“We ran the ball three times and lost a yard. Part of me, after that third [unsuccessful run] play, was ready for the press conference to say ‘if you can’t get a yard, you don’t deserve to win,” Clawson said.

Yet, on fourth down, Newman snapped the ball, looked to his left and didn’t find anything. He looked to his right and saw Hinton fading towards the right corner of the end zone.

Newman threw it high to Hinton, who had to use all of his 6-feet-tall stature to go up and catch the ball with two defenders draped all over him. He miraculously held on to the football.

All the times watching from the sidelines over the past four years, all the injuries and personal problems, all the transfer speculation during the summer led Hinton to that moment. When Wake Forest needed him the most, Hinton was there.

“I definitely thought about it [after the game]. It just makes this moment sweeter. Just being able to play with these guys for one more year and being able to share moments like this,” said Hinton about his game-winning touchdown catch.

He went from possible summer exit to game hero in just a single play. For both Wake Forest football and Hinton, they just had to keep fighting.