The Raptors Won A Championship; Now What? 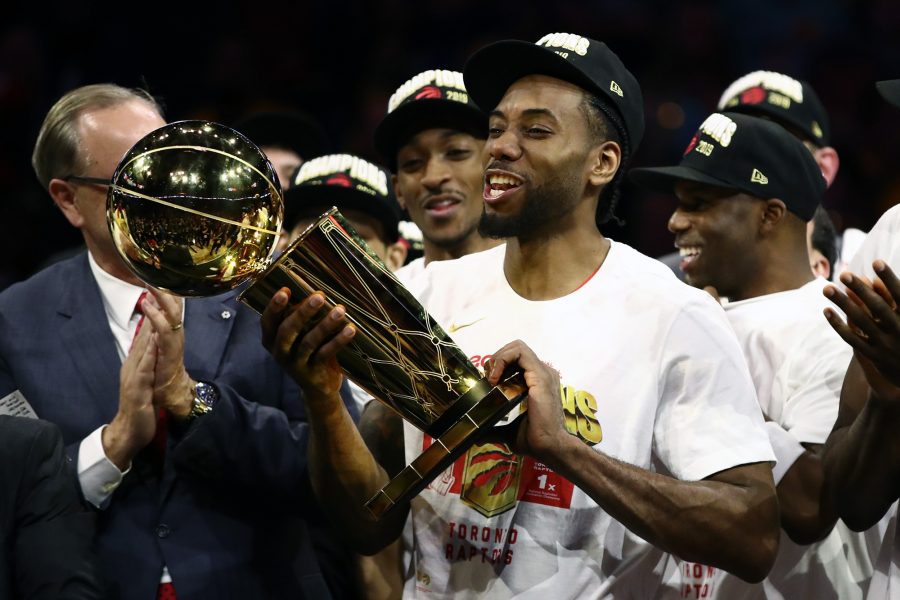 Kawhi Leonard of the Toronto Raptors celebrates with the Larry O'Brien Championship Trophy after his team defeated the Golden State Warriors to win Game Six of the 2019 NBA Finals at ORACLE Arena on June 13, 2019 in Oakland, Calif. Leonard and Paul George were added to the Clippers' roster. (Ezra Shaw/Getty Images/TNS)

With their first NBA championship under their belt, the Toronto Raptors have finished the 2018-2019 NBA season on a high note. After losing Kawhi Leonard in free agency, a gamble that the Raptors’ organization was well aware of when they traded for Leonard with the Spurs, how will the team fare in the 2019-2020 season without their MVP-caliber talent? Looking at the roster, there are some bright spots for Toronto fans. Pascal Siakam, 2018’s winner of the Most Improved Player award, showcased his massive upscale in talent and skill during the playoffs. As a valuable contributor and scorer when Leonard was taking a break or not making shots, Siakam has certainly shown All-Star potential. But can he be the primary scorer on a winning playoff team that has a chance to go deep into the playoffs?

Unfortunately, Siakam’s defense and scoring ability can be somewhat inconsistent at times. With NBA defenses now well aware of his talent, he will be guarded much more closely this season. His potential is growing but at this point in time he is just not the clutch shot-maker that any championship-caliber team needs. I can see him becoming a Jimmy Butler-type of player in the league over the upcoming years. Siakam could be good enough to maybe carry a bad team to the playoffs, but not good enough to be the primary scorer on a championship team.

Certainly, one of the Raptors’ roster issues is the ages of its players. Kyle Lowry is a 33-year-old and not getting any younger. He proved to be valuable to a contending team, but his body is losing the race with age. Another key part of the Raptors’ championship roster was Marc Gasol. The 34-year-old has a history of dealing with injuries. He had stretches during his time in Memphis when he was playing at an all-star level, but then he got injured shortly after. Marc Gasol’s defensive ability and prowess adds a lot to this Raptors and is not to be overlooked that he has a very high defensive IQ. Something that made him a terrific addition to the Raptors team is that he developed a somewhat consistent 3-point shot. If he can maintain that usefulness as he ages, then the Raptors will have made a great decision by extending his contract. Rounding out the veteran starting lineup are Serge Ibaka and Fred VanVleet. Ibaka is getting up there in age at 29-years-old but still has some left in the tank. Unfortunately, he has not been as much of a contributor to the team when it comes to scoring, but his defense is an important part of the Raptors’ arsenal. Fred VanVleet lit the basketball world on fire with his flashy 3-point shots during the NBA playoffs. He certainly has proved himself as a vital scorer to this Raptors’ team. His defense can be very good at times, and the fact that he is 25-years-old and already showing to be a good to great contributor is fantastic for the Raptors.

Part of the main issue that has been evident with the Raptors for the last five years, until when they acquired Leonard, is that they lacked the star power to succeed in the playoffs. They had the skill and talent to play very well during the regular season, but could not seem to replicate that. And with Leonard gone, will the Choke Raptors that Lebron-dominated team be back to where it was in the Eastern Conference? 2018 might have been the title year for the Raptors, but 2019 will tell us a lot about the future of this franchise.