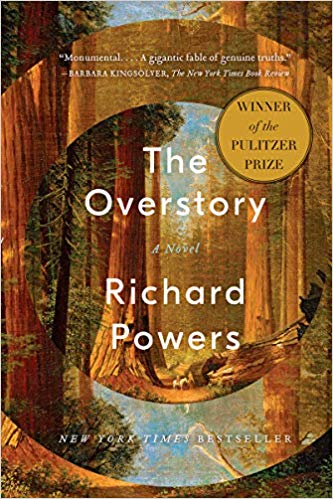 Richard Powers’ recent Pulitzer Prize-winning novel, The Overstory, examines environmental consciousness through the narratives of a cast of characters whose lives become undeniably intertwined, like the overlapping roots of the trees that compose the deteriorating forests that they are desperately attempting to save.

To begin, there is the quintessential botanist who has dedicated her scholarly work and life to researching the connective relationship that exists among trees within the deepest recesses of the forest.

Yet, Powers also challenges the conventional image of “tree-huggers,” while unexpectedly recounting the tales of how others become involved in the environmentalist movement to save the trees.

One of these uniquely influential characters is a young boy who grows up in the shade of the family’s chestnut tree, mapping the continuous growth of the divine giant through a series of photographs and continuing his natural studies through later artistic representations of the tree’s natural beauty.

Then, there is the girl who impulsively decides to travel in search of a nobler purpose and finds herself within a shop of free tree art. During her travels to California to join the efforts of a passionate camp of environmental activists she meets a boy artist.

These two make an intrepid adventure into the canopies of ancient, old-growth forests and envelop others into the fold of environmentalism as they practice compassion for and cohabitation with the environs of the natural world.

In a countercultural movement against the capitalist exploitation of the natural resources, these literary figures brazenly forge the path toward environmental sustainability by leading the fight to protect the trees and the natural world.

Powers expands upon this development within the context of urban life. Here, he introduces an intellectual property lawyer and his wife who struggle with the monotony of suburban living — that is, until they decide to collectively confront the societal forces that routinized their lives and attempted to enclose the natural growth of trees that they now both plant and protect.

He also comments on the potential for including sustainability within the context of the increasingly technological modern world. This new-age perspective appears through the lens of the young inventor of a video game that sensationalizes a virtual reality based in environmental realism.

Through individual and collective efforts, these characters demonstrate the multitude of possibilities for sustainable and intentional contributions to the preservation of mother earth, which can begin to reverse the tide of environmental destruction.

Seamlessly flowing from the stories of one character to the next, the novel embodies a collective and organic literary work that examines the breadth and depth of environmental responsibility in an increasingly diverse and complicated world.

Overall, Powers issues a collective call to environmental action against the degradation of forests, especially as he employs the voices of these characters and others. The novel empowers and inspires individuals of different races, ages, occupations and interests to find meaningful ways to make an impact.