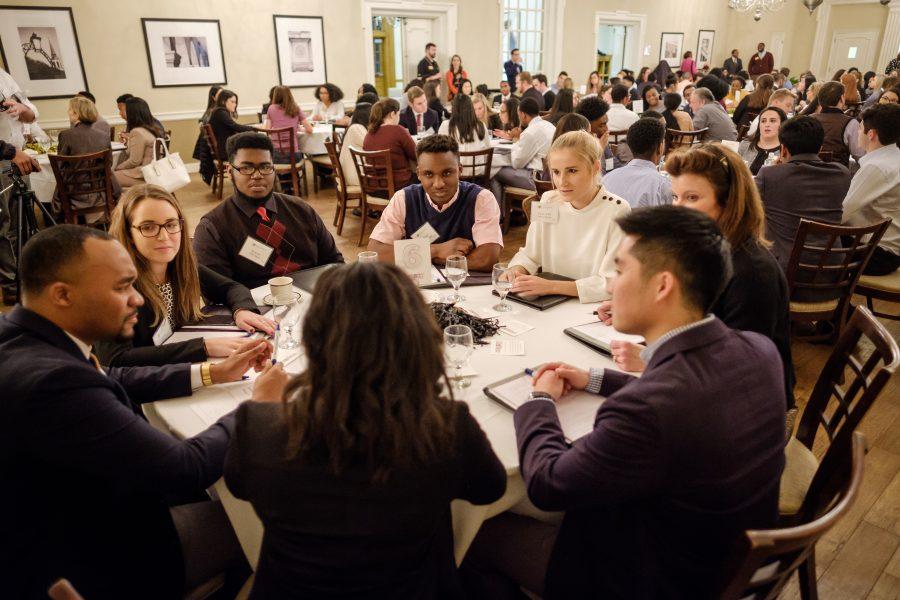 The Wake Forest Office of Personal and Career Development hosts an event, Diversity Matters, for students to talk with recruiters from regional and national companies, in the Magnolia Room on Tuesday, January 23, 2018.

On Sept. 10, the night before the hustle and bustle of Wake Forest’s fall 2019 Career Fair was set loose upon the Sutton Center, Benson University Center played host to a considerably quieter reception for employers and job-seekers: Diversity Matters.

Organized by the Office of Personal & Career Development, the gathering is a networking opportunity specially designed for employers looking for diverse talent to hire and for Wake Forest students who identify as diverse or who are from underrepresented communities.

The office clarifies that these include ethnic minorities, members of the LGBTQ+ community, first-generation students, students with disabilities and women.

“We have employers asking all the time [for diverse talent],” said Cheryl Hicks, associate director for Career Education & Coaching and Diversity & Inclusion Career Programs. “We asked, ‘how do we come up with a way to bring them together for an evening or a forum of some sort?’”

Hicks said that the event was designed to bridge the gap between diverse students and employers seeking candidates with diverse backgrounds. She said that many organizations in the modern working world that have goals to diversify their workforce sometimes have problems connecting with the candidates they are looking for. This event is part of a greater effort to create more fair opportunities for people of all races, colors and creeds, a climate that many academic institutions are striving towards.

Lee Svete, associate vice president of the Office of Personal and Career Development, stated that Wake Forest provides many opportunities for supporting students from diverse backgrounds.

“It certainly blends with the institutional commitment,” he said. “While the impetus came from us, it is still part of the inclusive culture that Wake Forest is trying to establish with ‘Pro Humanitate.’”

Hicks said that the office had tried similar events in the past, such as the Black Professionals Forum in February 2017, but that Diversity Matters would be more effective because it makes an effort to include all marginalized groups, rather than just one.

Diversity Matters has grown since its first incarnation in January 2018. It began with hosting only 11 employers and 80 students. Its fourth incarnation on Tuesday played host to 38 employers and had 250 students registered to attend. The event has also gained company sponsors, such as General Mills and Ernst & Young.

Hicks said that she hoped the homogeneity of Wednesday’s career fair would prove less intimidating for underrepresented groups of students that attended Diversity Matters. She clarified that the latter event operates in a slightly different format; students are placed at round tables with representatives of various employers in a room, rather than in a roomful of employers behind personalized booths. The students then rotate to a new table after spending a certain amount of time with each employer. At the end of the event, the floor is opened and students are free to mingle with the employers of their choice. Each student is expected to have conversed with at least three employers by the end of the event.

“Employers really enjoy the format that we have,” Hicks said. “The first time we did this, I had employers come up to me before they left the event, saying, ‘I like this so much better than the Career Fair!’ An intimate conversation with seven or eight students seems like a better way to get to know them.”

Svete said Tuesday’s event has also helped the office engage with the student population. The event opened with talks from student leaders from Student Government: junior and Speaker of the House Miles Middleton and senior and President Mellie Mesfin. The office has also engaged with many student organizations and campus partners, including the Office of Diversity and Inclusion, the Organization of Latin American Students, Spectrum and the Intercultural Center. Hicks said that these relationships have all been mutually beneficial, helping her office engage with students and helping the organizations empower students and themselves.

Diversity Matters has already received recognition beyond the bounds of Wake Forest’s campus through the National Association of Colleges and Employers, who recognized the Office of Personal and Career Development with the 2019 Diversity and Inclusion Excellence Award.

Students on the job hunt who missed Diversity matters on Tuesday need not fret; the spring semester event is already scheduled for January 21, 2020. Those interested should make sure to register on the Office of Personal and Career Development’s website before spots run out.