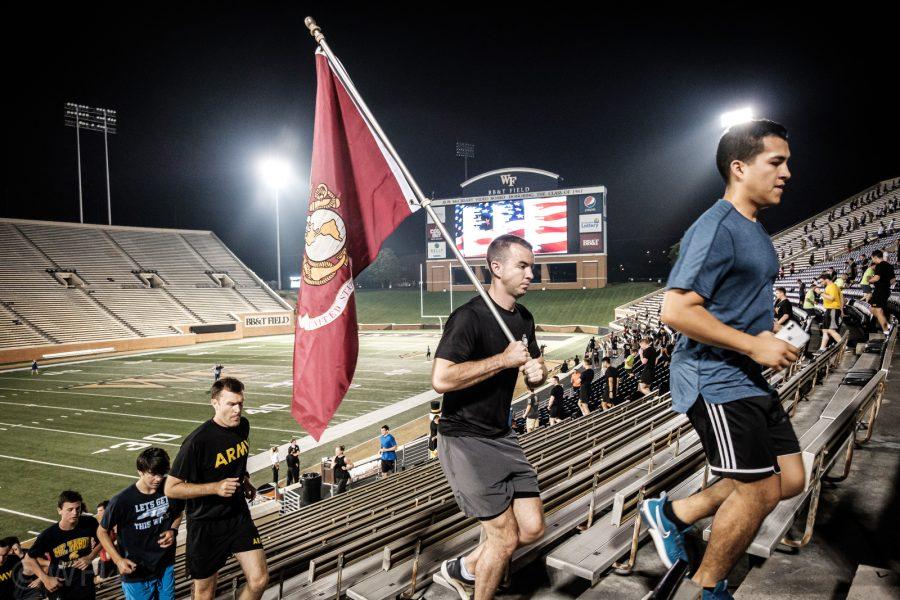 Wake Forest hosts a memorial stair climb to honor the anniversay of 9/11 at BB&T Field on Wednesday, September 11, 2019. Members of the joint ROTC program with Salem College and Winston-Salem State University join local first responders, athletic teams, and local citizens to climb 2996 stairs in honor of the victims.

At 12:15 p.m. on Sept. 11, the bustling thoroughfare at the center of the traffic circle outside Benson University Center was packed with students, faculty and members of the Wake Forest Army ROTC clad in black uniforms, gathered to commemorate a day eighteen years in the past that began with similarly gorgeous weather.

“Thank you for taking a moment to reflect and think about that pivotal moment that has run through the last eighteen years of our history,” said Retired Colonel Sean Hannah. “And for honoring this day of infamy and those who were affected by it.”

The event, sponsored by the Office of the Chaplain, memorialized the attacks that destroyed the World Trade Center in New York, the plane that decimated the Pentagon and the heroes who downed a hijacked plane near Shanksville, PA., killing 2,977 people and injuring over 6,000 others on September 11, 2001. Approximately 40 members of the Wake Forest community attended. University Chaplain Tim Auman gave opening remarks, which was followed by a color salute performed by the Wake Forest Army ROTC, accompanied by trumpeter Christian McIvor from the Divinity School. The event ended with a musical performance from Sally Morris.

Wednesday marked the eighteenth anniversary of the September 11 attacks. That tragic event in American history is also being memorialized by numerous news outlets, such as The New York Times and CNN. Social media, too, is buzzing: the remembrance-themed hashtag #NeverForget was trending on Twitter, at 806,000 tweets.

The Office of the Chaplain’s event was not the university’s sole commemoration. The first event was held on Tuesday, Sept. 10: a planting of 2,997 miniature American flags displayed on Manchester Plaza. Sophomore and co-chair of the judiciary committee Vincent Melara spearheaded the event.

“I thought it would be a great visual representation of the people who lost their lives on that tragic day. Each of the 2,977 flags represented a life taken,” he said. “Reminders such as this keep the victims and their families in our collective memory.”

The next event occurred soon after the first, at 6 a.m. on Wednesday morning. It was called the Climb to Remember, held at BB&T Field. Members of Army ROTC and the military science departments at Wake Forest, Winston-Salem State University and Salem College came together to climb 2,997 stairs in honor of the victims who lost their lives. The greater university communities of students and faculty were also invited to participate.

“Most of our Cadets were not old enough to remember the actual day, so this event allows them to reflect on what it means to serve others and feel a connection to what happened on Sept. 11,” said LTC Melissa Ringhisen, department chair and professor of military science at Wake Forest in an interview with Wake Forest News.