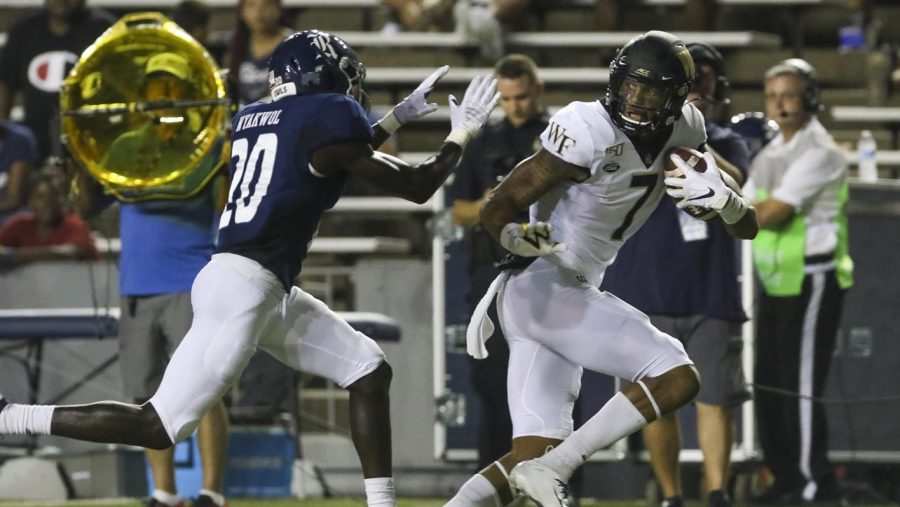 In a battle that pitted the Deacs’ high-flying attack against a solid Rice defense that allowed only 14 points in week one, the Demon Deacons slowly overmatched the Owls to get their first road win of the season.

Redshirt junior quarterback Jamie Newman proved once again why he has earned the starting quarterback job over the summer with another strong display. Newman threw for 312 yards and three touchdowns, while completing 21 out of 27 attempted passes. So far, Newman has thrown for at least 300 yards, three touchdowns with a 74.3 % completion rate and no interceptions over the first two games.

The most important takeaway is how Newman has been outstanding with his poise inside the pocket and dictating the rhythm of the offense, especially if you take into account that this was only his sixth game as the Demon Deacons signal-caller.

“I was proud of the way our offense responded with explosive plays. Jamie [Newman], two weeks in a row, has played at a really high level, very accurate, said Head Coach Dave Clawson during Tuesday’s press conference. “Scotty [Washington] and Sage [Surratt] continue to make big plays for us. I thought our offensive line protected well.”

Washington and Surratt have proven to be a lethal combination as the starting outside receivers. Both standing above 6 feet 3 inches, they provide a combination of size and athleticism that is not usually seen on a Wake Forest football team. Through the first two games, they have combined for 407 yards and four touchdowns. Each has also been a part of the ACC’s team of the week in back-to-back weeks. Having Surratt and Washington healthy and producing at this level alongside an accurate Newman might be the key for the Deacs surpassing their record of eight wins in a single season under Clawson.

As for Rice, they mounted a comeback attempt early in the game by tying Wake Forest at 14 at the end of the first quarter. It was a great offensive display by the Owls, especially considering that starting quarterback Wiley Green left the game after being stopped at the goal-line by Wake Forest linebacker Justin Strnad.

It was a clean hit by Strnad, but Green still had to be carried off the field on a backboard. Green was released from the hospital on Friday night and is now being monitored by Rice’s medical staff. Post-injury tests came back negative, which is a good sign for Green’s recovery.

The Deacs will now focus on their rivalry game against a North Carolina team that is also undefeated to start the season. The Tar Heels have defeated South Carolina and Miami in two tight affairs and have been receiving a lot of consideration for the AP top 25. Among the reasons for their surge this season, after winning only two games in total in 2018, is true freshman quarterback Sam Howell.

“Their quarterback Howell is in no way, shape or form playing like a true freshman. He has shown a lot of poise and played with a lot of courage. He isn’t scared to run the ball. The throw he made on 4th-and-17 and then the touchdown strike he threw [both in the game-winning drive against Miami], that does not look like a guy playing his second game. He is playing well and the moment is not too big for him,” Clawson said. “Their offensive line is big and very talented. I think they are doing a great job of protecting him and giving him time. Their skill will be by far the best skill that we have faced so far this year.”

In his first two games at the collegiate level, Howell already has amassed two fourth-quarter comebacks, akin to a certain Wake Forest quarterback who has three game-winning drives in the fourth quarter over his first six career starts.

The Deacs will host the Tar Heels at BB&T Field with a 6 p.m. kick off on Friday night. The Athletics Department has released a “blackout” campaign across all their social media to incentivize students to wear black Wake Forest gear against North Carolina. Despite not counting as a conference matchup, playing against UNC should make for one of the most electric home games the Deacs have had in recent memory.

“I think it’s a good chance, especially for our Wake Forest fans. We haven’t seen UNC in four years, I believe. The state championship is on the line right now, first one of those many games,” Surratt said. “I know a lot of alumni and fans have been waiting for this game and they are really excited about this game, and they want us to win really, really bad. It’s going to be a great atmosphere.”