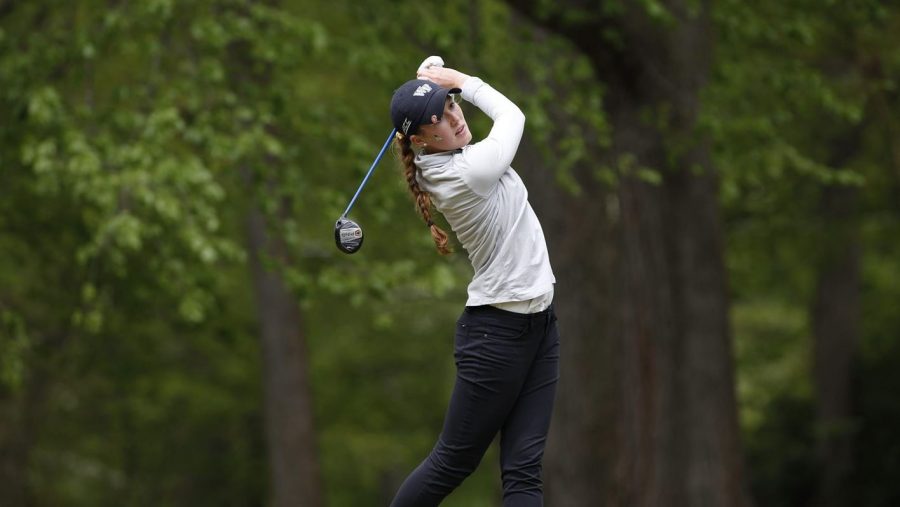 Whenever she looks back at her college career, Emilia Migliaccio might find many adjectives that describe her time at Wake Forest, but average is definitely not one of them. In 2018-19, as a sophomore playing for the Wake Forest women’s golf team, she won three individual titles: the Lady Tar Heel Invitational, the Bryan National Collegiate (which she shared with Wake Forest alumna Jennifer Kupcho) and the ACC Individual Women’s Championship. During the summer between her sophomore and junior year, Migliaccio also represented Team USA during the 2019 Pan American Games in Peru, where she won two gold medals, one in the individual women’s category and one in the mixed team competition. Migliaccio has also excelled off the golf course as well. Prior to coming to Wake Forest, she had already written a 486-page novel entitled Just an Illusion, which was published by Lulu in 2018. Now, Migliaccio looks forward keep building her career as both a golfer and writer during her junior year.

Rafael Lima: I guess we should start with the most out-of-left-field accomplishment on the long list of impressive things you’ve done. How is it to win two Pan American gold medals?

Emilia Migliaccio: It was amazing! It was such an honor to be in Peru and experience the Latin American culture. I mean, [in golf] the only time you can win a gold medal is in the Pan Am Games or in the Olympics. There was another big tournament that was at the same time as the Pan Am Games. It was the [U.S. Women’s Amateur], the biggest tournament in America. But the Pan Am Games are every four years. It was a tough decision, but I couldn’t pass it up. I think [the Pan Am Games] will always be the best experience ever.

RL: I know that golf is a sport that demands as much mentally as physically. How were you able to keep your composure on the last day knowing that you had a shot at going for gold?

EM: My mom helped a lot because she was my caddie. She played on the Swedish national team and played at Arizona. So, she has a lot of experience, and she just knows my game really well. She was able to help me control my emotional state. But, it’s all about focusing on the present, focusing on the particular shot you’re hitting and not focusing on “Oh my gosh, what’s happening? What are the other girls doing? The leaderboard is getting tighter and tighter.” The more you think about that, it’s like a tailspin. It doesn’t end well. Laughs. So, just kind of always staying in the present. It’s really hard to do, but when you do it, it feels great.

RL: You also seem to have a wide range of interests outside of golf. I saw that you had a book published before coming to Wake Forest. Could you talk a little bit more about that whole experience?

EM: It was really cool! It’s called Just an Illusion, my novel. I started writing it when I was a sophomore in high school and finished it when I was a senior. I published it through Lulu.com, which was a company about 20 minutes from where I’m from. So, it was nice to have like a local tie. It was awesome. I’m not doing it for the money or the sales, because clearly that is not the way to go if you want to make a career. Laughs. But, I love writing. It’s a great outlet. Especially, because it’s really important to have something other than your sport, or else you’re very consumed. It just gets too serious. You need something to kind of let loose.

RL: What made you go from writing novels to wanting to get involved with journalism? Those are two very different writing styles.

EM: Yeah, it’s very different. It’s super interesting because before I took my Intro to Journalism class, I never looked at the news. I hated it. I never took a journalism class in high school because I was like, “No, I’ll have to be all caught up with the news.” I was just not about that. I was like against it. Then, I took it [at Wake Forest]. I realized how important journalism is and how fascinating it is. Not only you can be creative with your writing, but you get to interact with people, which is something that people aren’t doing it as much [nowadays]. You get to make an impact. Journalism is so powerful.

RL: What are your plans for after graduation?

EM: I definitely want to go to [the Qualifying School] and turn professional. So, I’ll do Q School in the fall, which is basically qualifying into the LPGA event. LPGA is the women’s tour. So, there are three stages. If you finish top five in Golfweek or top five in WAGR you get exempt into stage two. So, basically I’ll go through those stages and hopefully make it.