Wizards Are Destined For A Rebuild 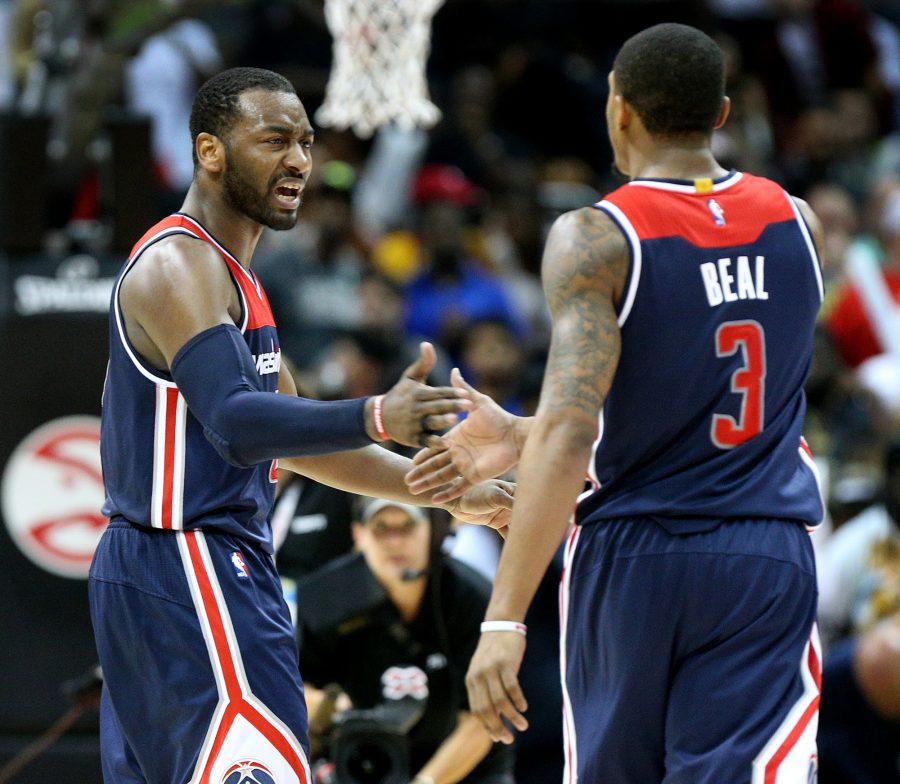 The Washington Wizards' John Wall, left, and Bradley Beal (3) celebrate a 115-99 series-clinching victory against the Atlanta Hawks in Game 6 of the Eastern Conference quarterfinals on Friday, April 28, 2017, at Philips Arena in Atlanta. (Curtis Compton/Atlanta Journal-Constitution/TNS)

There is no harder fact to admit then when a fan realizes that their team will not have any considerable amount of success in the foreseeable future. The NBA is no stranger to having teams where talent and success go to die, and even teams’ talent can’t create enough success to create change. It has been seen in the careers of many prominent players today. Anthony Davis has finally stopped wasting his prime in New Orleans to join the Lakers, championship player Kevin Love spent several years of his prime playing on a mediocre Minnesota Timberwolves team, Demarcus Cousins, newly of the L.A. Lakers, spent several years on a terrible Sacramento Kings team that could not surround him with the talent he needed to succeed, and there are many more examples.

A somewhat new addition to this list of star players currently wasting their careers on talent dumps is all-star Bradley Beal of the Washington Wizards. The last two years have been a bit of a slump for the Wizards. While Bradley Beal has had tremendous individual career success, becoming an all-star and truly developing into an elite leader for the team, the opposite could be said for the Wizards. In the last five years, the Wizards have either not been able to make the playoffs or had disappointing runs each time never being able to get out of the semifinals. Why is this happening?

Truthfully, a large part of the team’s lack of success is the lack of talent on the roster. There is really no bench to speak of, and other than John Wall and Bradly Beal, reliable scorers or ball handlers are few and far between.

On top of that, the defense that the team plays is absolutely terrible. They have no spatial awareness, and there is often a lack of effort on defensive plays. It can’t be ignored that John Wall has had a serious injury the last two seasons, and when he did play he play, he was lackluster. That leaves Bradley Beal with the responsibility to carry the team to a pathetic eighth seed and a five-game first round series exit, if the Wizards get lucky this season, very lucky. Another unignorable fact is that the coaching that had given the Wizards the initial success in recent seasons seems to also be the reason for their current failure. Coach Scott Brooks has stuck with the same coaching formula for his entire three-year tenure in Washington.

The system that Brooks created was at its best in the pick-and-roll game, and the team chemistry then was excellent. Marcin Gortat and John Wall’s elite connection on the pick and roll, combined with Otto Porter Jr.’s and Bradley Beal’s sharpshooting abilities, helped the team succeed in the first year of Brooks’ time in Washington.

But of course, Gortat got traded away because of his age and chemistry issues, and Porter’s massive contract had been weighing on the Wizards for quite some time, so off to Chicago he went. On top of that, Wall got a massive contract extension that seemed to have indirectly contributed to a lack of effort from him, a lack of effort that he continued to demonstrate last season.

Brooks’ lack of adaptation to new NBA offenses that are focused on high volume 3-point shooting and fast pace hinders any kind of success that the Wizards can attain. At this point the Wizards are just wasting the talent of Bradley Beal and John Wall and should just trade them away for younger players and start over. This kind of middle ground, where the team is not bad enough to get high draft picks, but not good enough to make the playoffs and have success, is not going to get them anywhere. They also need a coach who is familiar with a high-octane pace and has dealt with young players before. A good fit would be someone like the former Sacramento Kings coach Dave Joerger, who was in Sacramento during the time when the team’s pace increased dramatically with players like De’Aaron Fox and Buddy Hield.