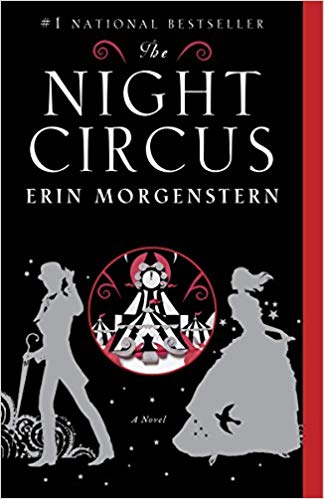 “The circus arrives without warning. No announcements precede it, no paper notices on downtown posts and billboards, no mentions or advertisements in local newspapers. It is simply there, when yesterday it was not.”

Thus begins the fantastic and enchanted journey that is The Night Circus by Erin Morgenstern. This novel exudes a subtle and ethereal sort of fantasy that is hard to capture in just 387 pages. Yet, Morgenstern manages to capture the reader in this whimsical story of the mysterious and illustrious circus, appearing and disappearing randomly in cities across the world, themed in black and white. This circus is Le Cirque des Rêves, or the Circus of Dreams.

This novel follows the journey of the circus as well as the two children at the center of it: Marco and Celia. These children are the center of the circus and grow as it grows. Celia is able to create wonderful illusions — though they are in fact not illusions at all — and Marco is able to create new worlds. Both have been trained vigorously for their entire lives in order to perform in the circus, and the reader quickly learns that this is not just a circus, but a competition between the two.

The two children exist throughout the circus, creating new tents of ethereal enigmas and wonderful features that are incredibly imaginative. As they keep adding to the circus, their competing tents and tricks grow more and more intertwined, as they are caught in a competition where they do not know the rules. Celia and Marco create not only tents in the circus buried in the pages of this book, but dreams in the reader’s head.

Morgenstern is able to create a world that the reader longs to experience, describing each detail down to the sounds and the smells, engaging each reader’s senses to explore an unknown world. The magic of the circus for the reader is that it truly is a Circus of Dreams. Each time the pages are opened, it feels as though you enter a new reality, transported to the world of Celia and Marco and the magical Circus of Dreams.

Morgenstern writes, “You may tell a tale that takes up residence in someone’s soul, becomes their blood and self and purpose. That tale will move them and drive them and who knows what they might do because of it, because of your words. That is your role, your gift.” This is indeed what she is able to do through this novel.

It is an experience of fantasy, magic, cruelty and love. The novel tells the tale of a sort of beautiful pain that the characters experience. The magic of the novel is that, while fantastical, the reader still connects to the main characters and their struggles, able to empathize. This deep empathy allows the reader to get lost in the idea that, at least for the duration of the novel, the fantastic may not be so impossible, delving into a realm of magic that one can imagine to be real.

While discussing the circus, Morgenstern writes, “You are no longer quite certain which side of the fence is the dream.” This notion is not one unique to the circusgoers. The reader is left with much the same idea following the conclusion of the novel. It transports you and tells a story unlike anything I have ever read, easily becoming a favorite book that you will find yourself wanting to reread each time you finish it.

If you’re looking for a fun read this semester then Morgenstern’s novels are a great choice. They transport you into another world which will easily allow you to escape the stress of homework.

The Night Circus was Erin Morgenstern’s first novel, and she will be releasing her second on Nov. 5 of this year. Her upcoming book, entitled The Starless Sea, is a love story set in an underground world of pirates, painters, lovers, liars and ships that sail upon a starless sea. This upcoming novel tells the story of Zachary, a graduate student entranced by the fantastical stories he reads in a mysterious book, until he reads a story from his own life in this book. In order to discover how his life found a place in the story, he sets out to discover the bewildering secrets of the book and the magical world in it. Along the way, he begins to discover his purpose, both in the story and in his life.

This novel is bound to be as wonderful as Morgenstern’s first, as she is able to convey the most whimsical things in her pages in a way that intrigues the reader and helps them connect and visualize the images. She is a truly talented writer, and I look forward to reading The Starless Sea, called “An ambitious and bewitching gem of a book” by Kirkus. Morgenstern commands words and puts them together in a wholly unique and wonderful way to create magnificent stories and scenes within her works, and I am sure The Starless Sea will be no exception.

The Starless Sea is now available for pre-order through most major booksellers. It’s currently selling for $20.27 as a hardcover on Amazon and its paperback is selling for $31.