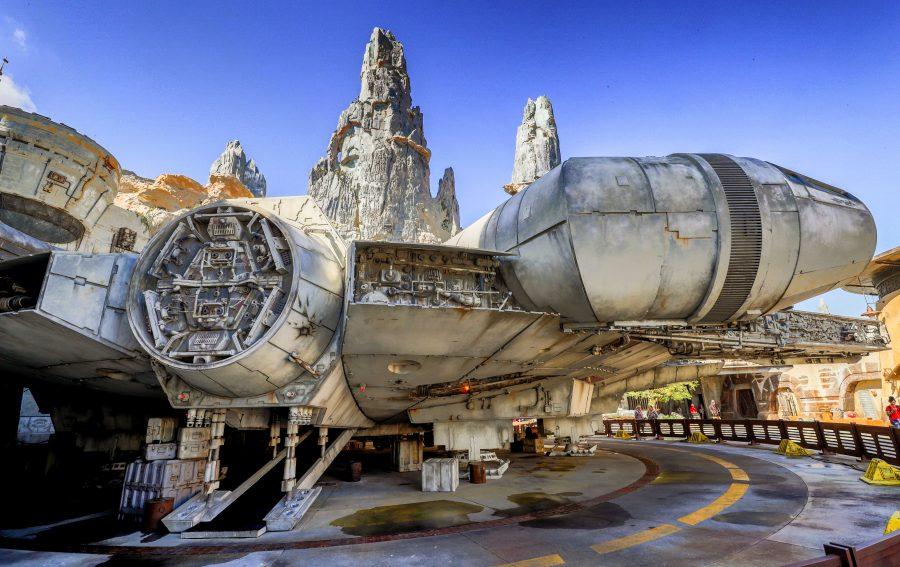 In a galaxy now not so far, far away, one is able to create their own story at Disney’s new attraction, Star Wars: Galaxy’s Edge.

Thanks to the magic of Disney, I had the opportunity to travel to the planet Batuu over the summer, and it didn’t even involve taking the Millennium Falcon to get there. Disney was able to bring the world of Star Wars to life. They had everything, and I mean everything, from the languages that would be used on Batuu, to the type of food and beverages served, all the way to the design of the bathrooms. Disney has once again shown off their attention to detail.

The whole experience begins when you walk into the land. It doesn’t matter which entrance you take; the landscape of the previous environment slowly fades away as Batuu begins to emerge. The towering tunnel from Frontierland makes you feel as if you’re being transported. Upon entering the attraction, you’re met with the rustic, futuristic look of the Planet of Batuu. I recommend that you start in Black Spire Outpost, where there are many merchants selling items that appear in the movies. However, they aren’t selling products from the movie, like little R2-D2s, because Disney wants you to create your own story, not re-live its plot.

From there, I suggest that you go to help out the Millennium Falcon on a smuggling mission. This interactive ride assigns six people with three roles. You can either be a pilot, engineer or gunner. I was an engineer, and we had to fix damages to the ship during the ride. Your performance and the performance of the crew affects the success of your mission. One of our pilots was about 5 years old, so we tilted towards the left as the other pilot struggled to steer for both. It’s rides like these where Disney seems to emphasize the underlying message of the importance of teamwork.

At this point, you may be starting to get hungry. You may need to learn the languages of Batuu first before you decide to order. Starting with the soda stands, you aren’t going to see the familiar Coke products. Instead, you’re going to receive spherical bottles with an out-of-this-galaxy language on the label. Despite being the same fountain drinks, they seem to taste better. Can a different bottle really do that?

Besides the sodas, there’s also the milk stand, which serves both green and blue milk. The “milk” (it’s dairy-free) is more of a creamy, powdery slushie. The blue is dragonfruit flavored, while the green is orange with passionfruit. Here’s the real kicker: a cup of milk (which oddly appears to be very similar to the standard drink cup of alcoholic beverages) is over $8. Despite this, it’s worth the purchase since it’s an interesting experience, but purchasing the drink is not necessarily a must. Disclaimer: it’s super sweet, so your sweet tooth needs to be ready for battle.

As for food, Disney provides a wide variety, including foods that appeal to all dietary needs. Once again, the food is in languages you would find on Batuu. Fortunately though, the descriptions are in English, but they still have a Star Wars flair. These dishes include options for vegetarians and those who are health-conscious, such as the Felucian Garden Spread. This is a plant-based “kefta” on top of an herb hummus, a tomato-cucumber relish and pita. This is the dish I had and would highly recommend. It was flavorful, and you won’t find anything else like this in the park. These foods are hard to find in other areas of the park, so it shows how Disney is adding more variety to address different needs. Overall, the food and drinks offered in Star Wars: Galaxy’s Edge add to the environment of Batuu and put you in the world that the characters were in.

Besides the decor, rides, food and drinks, characters from the recent trilogy, such as Kylo Ren, go around interacting with visitors. At one point, Kylo Ren, along with two stormtroopers, were interrogating an unsuspecting tourist on whether they were with the Resistance or First Order. You may even see Rey walking in Black Spire Outpost looking at merchandise or conversing with Chewbacca. These interactions with visitors put you on the planet of Batuu, yet not necessarily in the story of Star Wars, making you feel as though you truly are creating your own story.

Disney’s attention to details does not go unnoticed, and between the decor, rides, food and drinks, character interactions and more, this is a must see attraction, even if you aren’t a fan of Star Wars.