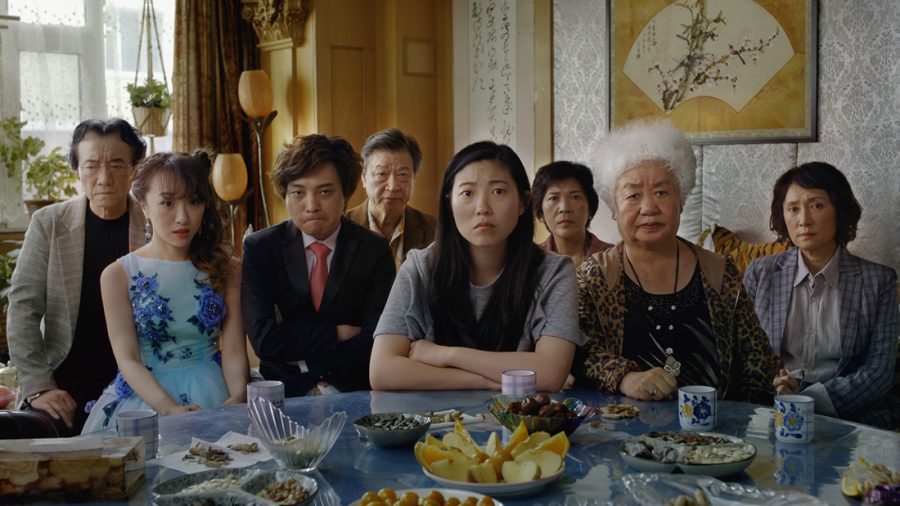 Jian Yongbo, Kmamura Aio, Chen Han, Tzi Ma, Awkwafina, Li Ziang, Tzi Ma, Lu Hong and Zhao Shuzhen appear in a still from The Farewellby Lulu Wang, an official selection of the U.S. Dramatic Competition at the 2019 Sundance Film Festival. Courtsey of Sundance Institute | photo by Big Beach All photos are copyrighted and may be used by press only for the purpose of news or editorial coverage of Sundance Institute programs. Photos must be accompanied by a credit to the photographer and/or 'Courtesy of Sundance Institute.' Unauthorized use, alteration, reproduction or sale of logos and/or photos is strictly prohibited.

Withholding devices, that is, formal choices made to starve the viewer of junk-food expressionism, when shyly deployed, bore us into indifference. But when executed well, an artistic strategy that avoids emotive scores, roving or shaking cameras and other spliced-in emotional cues, creates an unflinching intensity. After disorientation occurs, we become steeped in a kind of purity, riveted by a rare, popular antithesis. Spoiled viewers wriggle into authentic reflection instead of a bobbing above thought in an emotional drift. But this kind of fruitful austerity is difficult to execute, which is why it is assiduously avoided by commercial filmmakers, whose audiences can’t stand boredom because of its next step: critical thought.

That said, there have been a few recent triumphs of technical restraint. Paul Schrader’s First Reformed seared Ethan Hawke into a desolate world, portraying his emptiness as a simmering solitude slowly etching its own destruction. David Lowery’s A Ghost Story withheld visual intrusion like the code for a ticking bomb, blanching melancholic life into a dry-heaving existence. Joe Penna’s Arctic, a hopelessly frigid epic, shot Mads Mikkelson’s minute futilities against a soundless white apocalypse. All these films accomplished a haunting simplicity, through which they presented a canvas for viewers to create thoughts and emotions unprompted by formal signposts. The Farewell does not always achieve this perfectly immaculate effect, sometimes lapsing into an insipid asceticism instead of bare intensity, but it’s formal choices mimic the subject of a film about whispered desire and explicit repression.

“Based on a real lie,” The Farewell is about a Chinese family’s decision to conceal a fatal cancer diagnosis from their grandmother, Nai Nai (Shuzen Zhao), in accordance with the Chinese cultural duty that dictates that the unafflicted carry the emotional burden for the dying. The family convenes in China, after 25 years apart, under the guise of a wedding [Han Chen and Aoi Mizuhara, blatant strangers to one another, barely able to communicate]. Billi (Awkwafina), granddaughter of Nai Nai, is the last to discover the Chinese tradition and the first to scorn it. The film contrasts her sensitivity and confusion with the unanimous repression of her family, making the duped but jubilant Nai Nai, ecstatic over her family’s reunion, all the more painful to endure. The family’s knowing frowns and verbal tip-toing, tried by Nai Nai’s excitement, make the film sweet and genuine, subtle and disturbing. Billi, a young creative used to the gushing expressivity of New York City, wrestles with her elder’s strict adherence to tradition; she sees obvious cruelty, but the rest see a gift borne of arduous duty. Billi’s only option is to become withdrawn and evasive, something her spirited grandmother notices and tries to remedy. The two have the closest relationship of all, and the invisible strain on Billi lurks a step away from articulation, paring our own desire for visual explosion with Billi’s urge to reveal the truth to her grandmother.

The camera is staid and reserved, almost punishingly immobile. Just as the family members (and there are many) must bear their emotional burden in silence, the camera perches itself in the corner of the room and remains outside persuasion. We are to judge; or, more accurately, we are to ponder the moral quandary for ourselves, except for in moments of visual fulgurance, where there seems to be a fleeting answer. There is a scene at the wedding, where the camera becomes dizzyingly engaged around a table, flitting between faces, showing us a moment of interstitial bliss, as if to say, isn’t life an interminable trudging, punctuated only by a few flashes of unspeakable pleasure? Would a confession only limit the remaining days to despair?

This moment creates a notion of family outside socio-political reality. The brutalist architecture of communist China we glimpse as Billi arrives implies an inherent sameness, a repressive conformity that stunts individual growth; hence, most of the family’s hasty exit to Japan or America. Yet, they return as an interactive whole, charmingly cooperative and quippy, albeit with some hidden animosity or unspoken dread. It is another tension the camera lets develop without intrusion. The exodus out of China was prompted by larger societal limitations, but the nuclear family remains intact and in love. Nai Nai, happy all have returned, stands in for a latent guilt floating around their departure, claiming intimacy of family is perhaps enough to stay. Just as the superficial moral of the story is not as apparent as it may seem, the other emotional realities of the characters slide along a grayscale. Reflection is the operative mode, not definitive interpretation. One can easily imagine the over-produced, Hollywood moralism that could’ve been, but through a willful sublimation, The Farewell avoids moral target practice.

The least withholding of all is the film’s score by Mykal Kilgore. Reminiscent at times of the dragged-into-a-sacrifice feel that permeated Jordan Peele’s 2019 film, Us, the film’s ambient sounds hit the ear like an impacted, liturgical chorus poured into timeless flutters of flutes and harps. The score simultaneously enhances the foreboding frigidity of the film while accomplishing a kind subtle inverse, whereby it makes briefly salient the roiling interiority of the characters that strain to conceal it. The sounds emerge as controlled expression, not quite a throng but an ancient immersion, perforating the discourse of the film (as Barthes would say), while never becoming unglued from it.

The social versus nuclear individual; the comparative merits of culture and the irreconcilable thoughts inside us — that is the canvas on which The Farewell wishes us to paint. “There is nothing neither good or bad, but thinking makes it so,” Shakespeare says, unconsciously illumining the dialectical tension at the center of the film (written and directed by Lulu Wang). Almost immediately the moral question bears out, but the pleasure comes from where we go from there. The camera tells us almost nothing, and the music feints in various fuzzy directions. Through raw human observance, clothed in cultural dissonance and facile judgements, viewers think and discover — discover, mostly, that life has only edges, places of fleeting definition, dissolving utopias.