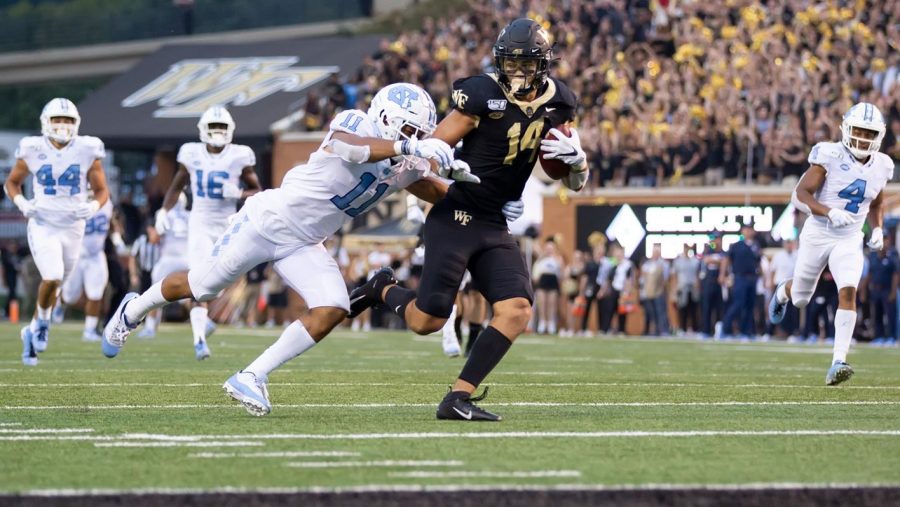 The fact that it was not an official ACC game did not matter at all once the whistle blew to renew the storied in-state rivalry between Wake Forest and UNC on Friday night at BB&T Field.

With both programs on the rise after starting 2-0, this game was seen as an opportunity to assert themselves and send a message to the rest of the ACC, which has no clear No. 2 team behind Clemson. In some ways, the game did send a message, but rather on how far each team is on its rebuilding processes.

Wake Forest, in its sixth year under Head Coach Dave Clawson, showed the maturity and discipline of a program that has built a well-defined culture of sustained winning after three consecutive bowl victories. This was evident on the field by the intensity and physicality with which Wake Forest handled UNC over the first 45 minutes of the game. Wake Forest suffocated UNC during its first 11 possessions, forcing nine punts and two fumbles by the Tar Heels. The key to the Demon Deacons’ defensive dominance was in creating a lot of pressure inside the pocket and keeping true freshman sensation, quarterback Sam Howell, uncomfortable.

“I think our defensive front played well. We won some one-on-one matchups, and I thought our third down pressure package was effective. When you have a young quarterback like [Howell], you want to get him in third downs and bring different looks and different pressures,” Clawson said after the game. “When [Howell] pre-snap knows where he can go with the football, he is really, really good. He is going to be one of the best quarterbacks in the ACC very quickly. A lot of the reason why we were good on third down is because we held him on a lot of third-and-longs.”

The defensive dominance allowed the Wake Forest offense and quarterback Jamie Newman to jump up seamlessly to a 21-point lead. Newman continued his superb quarterback play during the first half. He threw for 170 yards on 10 for 17 with three total touchdowns (two rushing touchdowns).

“Our motto all week was ‘go fast and go score a lot of points early,’ and you know, our defense did a great job in shutting them out during the first half,” Newman said.

However, during the second half, Wake Forest had some difficulties replicating the same explosiveness both offensively and defensively. The play-calling started to get a little more conservative. At the beginning of the fourth quarter, Wake Forest rushed the ball four straight times with running back Kenneth Walker III in a drive that ultimately resulted in a punt by Dom Maggio.

“When we had a three-score lead in the fourth quarter we purposefully slowed it down. We were up 18, there were 15 minutes left and we tried to slow it down,” Clawson said. “Then when they scored, scored again and got [the two-point conversion], then we had to play again, and that’s hard. When you’ve been going slow and trying to drain clock, all of a sudden you [are] ‘hey let’s go fast again,’ and I thought our guys did a heck of a job [given the circumstances].”

A lot of credit should be given to UNC, whose fourth quarter comeback magic over the first two games almost worked again against Wake Forest.

Despite not generating any offensive threat for the whole first half, the Tar Heels finished the game scoring on three out of its last four drives. If it was not for a poor clock management and running back Michael Carter lack of clock awareness at the end of the game, the Tar Heels might have been four-for-four and winners at the final whistle.

The national excitement of UNC’s first two wins was well deserved, but so was the downfall of its first loss under Brown’s second tenure at Chapel Hill. Lack of urgency to start the game and poor decisions during the final drive are clear signs of a rebuilding team that had only two games under its new head coach.

“[Wake Forest] outplayed us so much in the first half, and we got in a huge hole, and that’s credit to them. I didn’t think we were as ready to go as we needed to, and then at halftime, the guys had to make a decision,” said UNC Head Coach Mack Brown after the loss. “I learned that we weren’t mature enough and our coaches and I didn’t do a good enough job getting through the first two games and getting over the Miami game and preparing well for this one emotionally.”

UNC saw in Wake Forest, and its solid foundation under Clawson, what they aspire to build under Brown: a disciplined team that can capitalize on its talent.

In the first battle between these two high-upside teams, the Deacs came out on top. Fortunately, we will not have to wait four more years to see the next chapter of this rivalry.