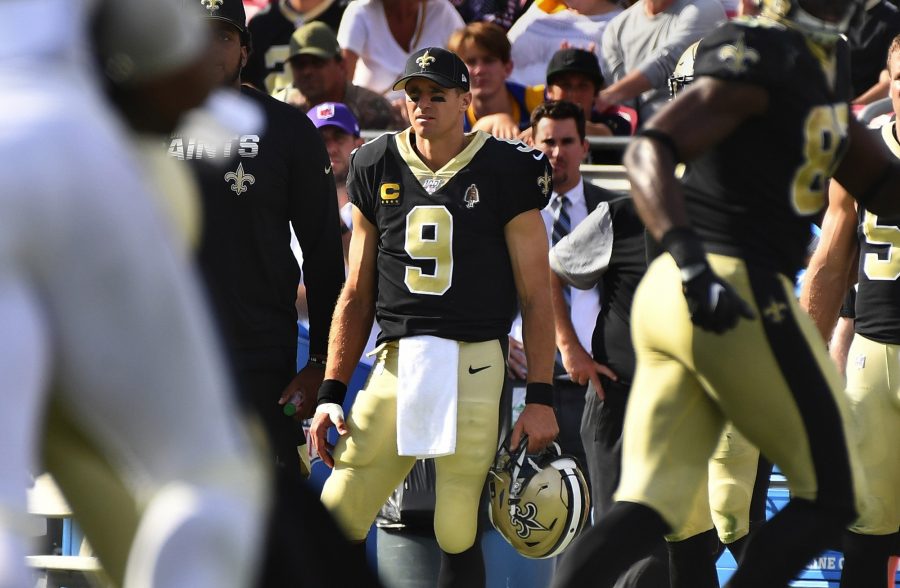 With his hand wrapped, New Orleans Saints quarterback Drew Brees watches from the sideline against the Los Angeles Rams on Sunday, Sept. 15, 2019 at the Coliseum in Los Angeles, Calif. (Wally Skalij/Los Angeles Times/TNS)

Rams 27, Saints 9 — This game had all the makings of an NFC Championship preview. That was until Drew Brees went down early in the first quarter with an injury to his throwing hand. Predicted to spend the next six or so weeks recovering, Brees will have to hope the offense can find an identity around backup quarterback Teddy Bridgewater. If they can keep their heads above water and win some games, a playoff run could still be in the cards. Based on the way the Rams defense was playing and Jared Goff’s connections with his receivers, the Rams will be waiting on the Saints if they make it.

Seahawks 28, Steelers 26 — In a weekend that turned out to be reminiscent of a Game of Thrones’ Red Wedding for NFL quarterbacks, the Steelers saw Ben Roethlisberger be claimed as one of the victims. The team was still able to show up stronger than they did in Week 1 against the Patriots, but the Mason Rudolph-led offense was unable to capitalize on a two-point conversion to tie the game in what turned out to be their last possession. Big Ben is out for the season, and the Steelers recently traded third-string quarterback, Josh Dobbs. The pressure is on for Mason Rudolph. Meanwhile, the Seahawks keep finding ways to win, on the way to their first 2-0 start since their 2013 Super Bowl season.

49ers 41, Bengals 17 — Matt Breida and Jimmy Garoppolo seem like quite the formidable backfield after a lackluster performance in a Week 1 win over the Bucs. Their defense, full of big names and high draft picks and anchored so far by second-year middle linebacker Fred Warner, has given the team the consistency they’ve needed to win two games in a row. That’s a feat they only accomplished once last year, and even then they waited until the tail end of the season to accomplish that. If the Week 2 49ers offense can stay as consistent as their defense, this will be a team that can be competitive with just about anyone.

Ravens at Chiefs, Sunday at 1 p.m. — Aside from their defense giving up 275 yards on an 88% completion rate to cultural icon Gardner Minshew II, the Chiefs have looked like championship contenders on both sides of the ball this year. As for the Ravens, this is the chance to prove they can compete with anyone and that the hype around Lamar Jackson and the team as a whole isn’t just a fluke. Viewers should expect to see some very well-executed offense, but don’t be shocked if the defenses show up big in the critical moments. This one is a must-see.

Falcons at Colts, Sunday at 1 p.m. — So far in 2019, the Luck-less Colts have been anything but unlucky. They stayed within arm’s reach of a talented Chargers team Week 1, and they picked up a valuable division win against the Titans in Week 2. The Falcons followed a Week 1 dud against the Vikings by beating Carson Wentz and the Eagles behind twin 100-yard receiving games from Julio Jones and Calvin Ridley. The Falcons defense has only given up 320 yards passing this season, meaning the Colts rushing attack is going to have to help Jacoby Brissett if the Colts want to have any success. Both teams are still looking to prove themselves, so this should be a fun one to watch.

Saints at Seahawks, Sunday at 4:25 p.m. — The Seahawks should be confident after their 2-0 start, but they should also feel very fortunate. They squeaked past the Bengals by a point after giving up 418 passing yards to Andy Dalton. They beat the Steelers by two points after Ben Roethlisberger left the game after throwing just fifteen passes. They’ll benefit from two Week 2 quarterback injuries, as Drew Brees will no longer be available to put up video-game numbers against them after suffering a hand injury on Sunday. If backup Teddy Bridgewater has a good week of practice, Head Coach Sean Payton and Offensive Coordinator Pete Carmichael can put him in a position to succeed. On the defensive side, if the Saints can play as well as they have in short bursts for a full 60 minutes of football, this could be a good game. The Saints need to win games without Drew Brees to position themselves for the playoffs, and the Seahawks are out to prove their 2-0 start isn’t a fluke. Expect a hard-fought, emotional game.