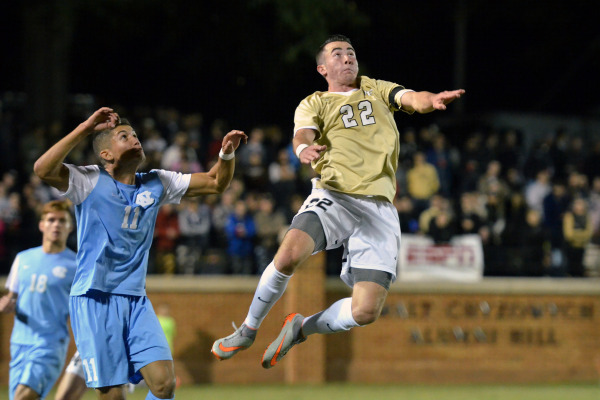 During fall break, the Wake Forest men’s soccer team was doing anything but taking a rest. On Friday, Oct. 16, an ACC showdown at Spry Stadium commenced between then No. 4 Wake Forest and then No. 2 North Carolina.

Wake Forest took control of the game, winning it 1-0, and subsequently replaced UNC as the No. 2 team while UNC would fall to No. 6 in the NSCAA Coaches poll.

Then, on Tuesday, Oct. 20, the No. 2-ranked Demon Deacons took down the Georgia State Panthers in a 5-0 blowout.

On the night of Oct. 16, 5,070 fans showed up to Spry Stadium in order to watch the intrastate rivals Wake Forest and North Carolina face off in ACC action. The first and only goal of the game came from Jacori Hayes in the 17th minute.

A great through ball from Jack Harrison split the defense as Hayes ran onto the ball and coolly finished with a left footed curler into the far post.

The game was anything but uneventful, though. The Tar Heels were able to get off 12 shots, only slightly eclipsed by the Demon Deacons’ 13.

Due to another heroic effort by the Wake Forest back line, only four shots made it on goal keeper Alec Ferrell’s net. None were straightforward saves.

Ferrell keeps coming up big in important matches and has an innate ability to be in the right spot at the right time.

Because of his ability to neutralize the Tar Heel offense, freshman centerback Sam Raben was awarded ACC Defensive Player of the Week.

On Oct. 20, Wake Forest went to eight games unbeaten with a win versus the Georgia State Panthers, who were 6-5-0 going into this game (2-0-0 in the Sun Belt Conference).

The game saw five different scorers as Wake Forest looked to rest some legs once a comfortable win was in the bag. In the first half, Jacori Hayes had two assists in just 28 minutes of field time, helping Kris Reaves and Brad Dunwell each score their first goals of the season and also of their collegiate careers.

Also in the first half, Jon Baker scored his fifth goal of the season off of a cross from Harrison.

Bad news also came in the first half for the Demon Deacons, when Michael Gamble and Kevin Politz were both injured within four minutes of each other. Their conditions are currently unknown. The second half saw Wake Forest continue their dominance. Tane Gent poached his fifth goal of the season off of a cross from Ricky Greensfelder in the 59th minute, who was also assisted by Philip Parker.

Then, a glorious strike off the foot of Jared Odenbeck finished the game off, after he received the ball from Tane Gent. With 30 yards between him and the net, Odenbeck smashed the ball into the back left corner.

A strong performance offensively overshadowed the defensive shutout, but holes definitely appeared in the defense. Of course, while the loss of Michael Gamble, Wake’s top goal scorer, is devastating, the offense seems to have plenty of firepower with Tane Gent and Jon Bakero able to function as strikers, while also having Jack Harrison, Kris Reaves, Ricky Greensfelder, Hayden Partain and John Schuman on the wings getting time against the Panthers. With the condition of Kevin Politz, one of the key points of the Wake Forest defensive unit, unknown, the Demon Deacons will have to find the best way to cover the position. Head coach Bobby Muuss seemed to be testing the option of Kris Reaves or Chase Rhode, who each got time in at center back versus Georgia Tech.

The Demon Deacons’ second-to-last home game of the season is against Notre Dame on Friday, Oct. 23, at 7:00 p.m.