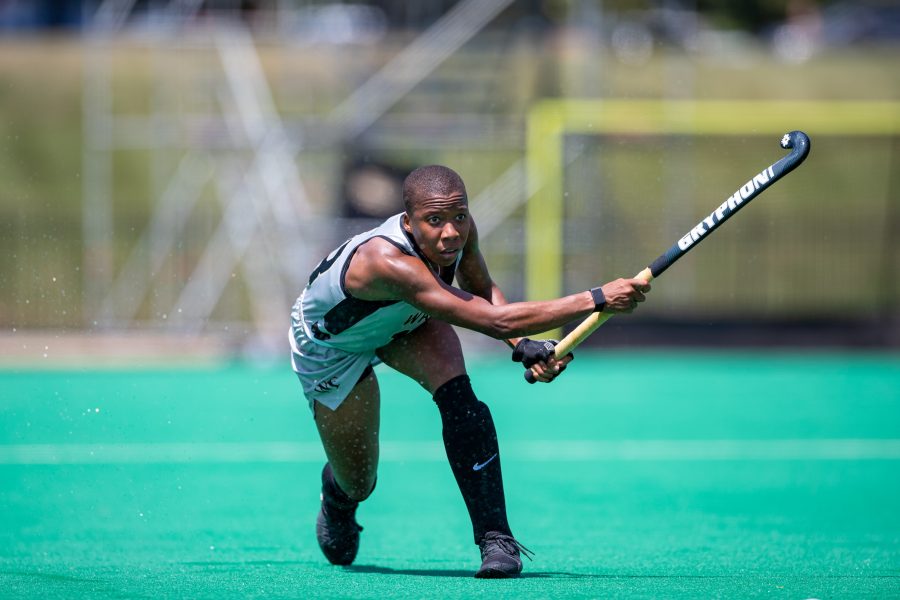 The Demon Deacon field hockey team gained a tough and experienced player this season: Nthabi Maine from Durban, South Africa, is playing her last eligible year for the Deacs while she studies Documentary Film and Sports Media and Storytelling in the graduate program. She has competed all over the world, starting her college career in South Africa before she was recruited by the University of the Pacific in California. An injury left her on the sidelines for the first three games of this season, but the strong defender hopes to get back on the field as soon as possible to help the team excel in the ACC this year.

Lucy Nelson: If you could be any athlete, who would you be and why?

Nthabi Maine: Hmm … I think I’d have to go with Megan Rapinoe on the soccer team. I think, on top of being an amazing athlete, she just stands up so strong for what she believes in, and I respect that so much. I think it’s tough for women especially today to stand up for something and not get backlash, and she doesn’t really care about the backlash; she just says and does what she believes is right. Mad respect to her.

LN: Did you notice a general difference in the style of play or strategy in America compared to in South Africa?

NM: The one thing I do notice most is, well, there’s a lot more resources put into it here [in America] which makes sense since South Africa is a third-world country. But also the team spends a lot more time together in the United States Your teammates are your best friends, which I love so much. Also, conditioning-wise, there’s a much bigger focus on that here. Like if you just look at the U.S. Women’s National team, those chicks are ripped. Our assistant coach used to play on the national team, and even if you look at her and compare her to any South African player, you can just see the difference — it’s crazy.

LN: As your first year as a Demon Deacon, what do you hope to bring to the team on the defensive end?

NM: I hope to bring, I’d say, a physical aspect. I mean, I’ve been injured the past couple of games, and I think that’s one thing that, watching, I think we can definitely use a lot more of. For example, we played Northwestern this weekend, and if the Northwestern girls were to push us over people would complain, whereas I’m the type of player who will push back, you know, like nothing crazy, but I just stand my ground, and I think that’s something that I’m definitely looking forward to bringing to the team.

LN: How has it been adjusting to the team so far, and have you noticed any main differences in this team from your prior one in California?

NM: The main differences that I’ve really noticed have more to do with the coaching style. I feel like my previous coach was more … I guess I could say tactical, whereas the coach here has a balance of tactics, as well as motivation and mind-set and overall wellbeing. She wants to make sure that we’re in the right place mentally, which I think is super important as well. And then the team has been super welcoming. I mean, I already love my teammates, and I’ve only been with them for two-or-so months. So yeah, everything’s honestly been great, and I wouldn’t change a thing.

LN: Have the tough losses against Princeton and Northwestern motivated the team?

NM: Oh, absolutely. There’s an element of frustration there, but I think as these games keep coming up and the frustration starts to build, we’re trying to channel all that energy into practice and into turning it around into positive energy, which this week is going to be a huge focus. We’re just trying to take everything that we’ve done wrong and fix it, because I mean, we all feel the same way. At the end of the day, we’re all on the same team, and we don’t want to feel that way, so we’re really fired up to have a good weekend.

LN: How are you guys preparing to use your strengths against Boston College and Liberty University this weekend?

NM: We haven’t really dealt that much into analysis this week yet, but we’ve played Liberty before and we kind of have a sense of their style of play — they’re pretty quick and aggressive, I’d say, which will definitely up the match. So, I think the coaches are definitely making sure that we’re prepared physically as well as tactically. We want to make sure that we cover every single corner when we’re preparing for this weekend.