Meet The Next NFL Rookie Sensation 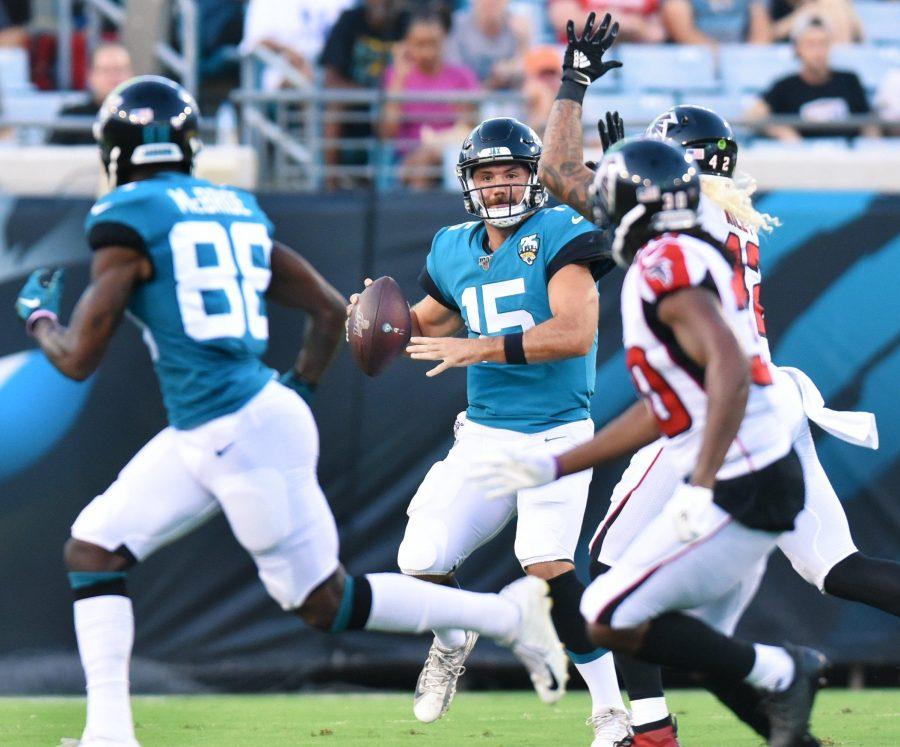 Jaguars quarterback #15, Gardner Minshew II looks to receiver #88, Tre McBride on what turned into an incomplete pass attempt during first quarter action. The Jacksonville Jaguars hosted the Atlanta Falcons at TIAA Bank Field in Jacksonville, FL Thursday, August 29, 2019 for the final preseason game before the start of the regular season. [Bob Self/Florida Times-Union]

Making his first ever NFL start, Gardner Minshew II turned more heads than one would expect for a sixth round pick of the less-than-storied Jacksonville Jaguars. Minshew followed up his stunning 22-for-25, 275 yard passing performance in relief of the injured Nick Foles in Week 1 with a solid effort in a grinding defensive battle against divisional foe Houston. Fans of Minshew from his college days probably weren’t surprised when they heard his name again. He’s used to turning heads, both for big numbers on the field and an even bigger personality off the field.

At first glance, a faded photograph of Minshew would be enough to convince some that he is a mid-80s quarterback that even their dad has forgotten about. With his, for lack of a better word, robust mustache, he resembles a real-life depiction of a successful Uncle Rico of Napoleon Dynamite. Except real-life doesn’t do him justice. From his American flag headband to his shiny shirt that serves the purpose of chrome accents on the Cadillac that is Minshew’s chest hair, this man is larger than life.

Gardner Minshew II is such an enigma, not even his name can be taken for surface value. Gardner Minshew II’s father is not Gardner Minshew I. Neither is his grandfather, or any other male family member for that matter. No, Flint Minshew simply decided he wanted his son to be a Second, and he liked the name Gardner. It almost got more complicated than that. Minshew’s grandfather made a strong push for the baby boy to be named Beowulf. Yes, we were one questionable decision away from the Jacksonville Jaguars being quarterbacked by the mustachioed Beowulf Minshew II. We will just have to settle for Minshew.

Unless Uncle Rico was misleading us all, Minshew differs from him in more ways than just having capitalized on his football dreams. Minshew is actually a pretty smart guy, having scored the second-highest score of all quarterbacks entering the NFL draft this year on the Wonderlic test, an exam designed to gauge the mental abilities of NFL prospects. The Jaguars recently added Josh Dobbs, an aerospace engineering graduate, to their quarterback room. When reporters commented to Minshew that, based on Dobbs’s degree and his Wonderlic score, the Jaguars must have quite the intelligent group of quarterbacks. Minshew responded, “I’ve got a communications degree. I know all y’all know about it. I belong in this [media] room more than that one.” Add humility to the list of lovable Minshew qualities.

Gardner’s personality is one that should be appreciated in the moment. After all, we almost never got to see him in the spotlight of an NFL quarterback. As a journeyman college quarterback, Minshew had several options when leaving his third stop, East Carolina University, as a graduate transfer. He narrowed it down to backup quarterback roles at two schools: Washington State and perennial power Alabama. The draws of ‘Bama were clear: learn under one of, if not the greatest college football coach of all time, accept a graduate assistantship there and use connections to enter into a coaching career. Washington State was a less obvious choice — no national championship hopes, not the same coaching prestige. However, WSU’s quirky head coach Mike Leach proposed one point to Minshew that would seal the deal in the end: be a backup at Alabama or be a part of the nation’s leading passing offense. In other words, put up comical stats and have a lot of fun. What decision did you think Minshew would make?

Minshew’s choice paid off. He came off the board in the sixth round to the Jaguars, with plans to learn behind new starting quarterback Nick Foles. That was very unlikely to happen had Minshew spent last season as Tua Tagovaila’s backup at Alabama. A sixth-round pick is not one that comes with high career expectations, but one other quarterback drafted in the sixth round comes to mind: potential greatest of all time, Tom Brady. I am by no means suggesting they will have comparable careers in any way, but a world in which we get to enjoy Gardner “Beowulf” Minshew II for 20 seasons is exactly the type of world I   want to live in.