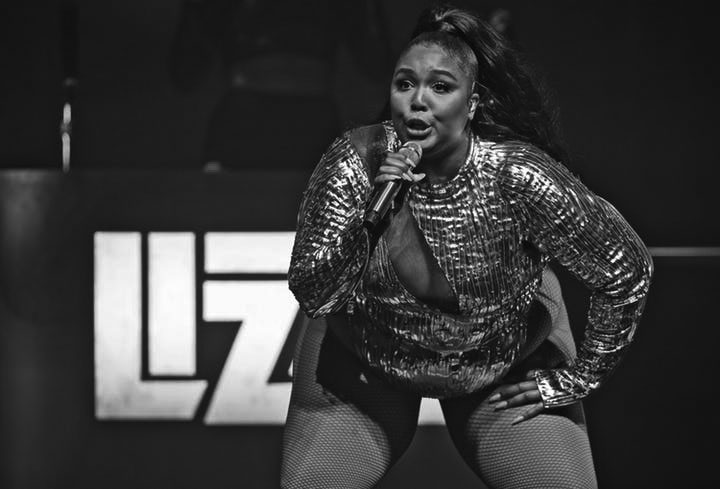 Lizzo performed at the Palace Theatre in St. Paul.

Did you see the full moon this weekend? That’s right, the Friday the 13th full moon was indeed overshadowed by a star that shined much brighter: Lizzo.

Her concert this past Friday in Raleigh was an experience like no other. Lizzo is not only an immensely talented singer, but she is also a gifted flautist, dancer, comedian and motivational speaker. With a full dance crew behind her, Lizzo performed music from her first and second albums (Coconut Oil and Cuz I Love You). She weaved through her setlist in unusual form, starting songs in the middle, interrupting them with remixes and flute solos, then returning to the song’s beginning to satisfy the audience’s full cravings. Her transitions between songs featured twerking battles, audience-interactive games and speeches encouraging self-love. With such a spectacle, it was hard to look away from the stage.

However, part of the beauty of this event came from offstage. Looking around the full amphitheater, it was hard not to notice the diversity of the crowd. Often, when you go to a concert, you expect a certain type of person to be there, or at least a theme of dress. Going to see Ke$ha when I was in middle school was like entering a cult of teenage girls, where the uniform required neon fishnet tights, tribal print, and feathers woven into hair. At Lizzo, there were people of all ages, races and genders, and there was no one style of clothing. I saw everything from old men wearing pajamas to toddlers wearing tutus, and everything in between.

This shouldn’t be surprising, because Lizzo herself doesn’t want to be categorized. Pitchfork’s review of Cuz I Love You critiques the album for its lack of commitment to any genre. We go from R&B to rock & roll, from 80s pop to hip-hop, from funk to soul. Her inspiration draws from Prince (compare the opening of “When Doves Cry” to “Tempo”), Rihanna (“Love On The Brain” versus “Jerome”) and even Phantom of the Opera (does the chord progression of “Cuz I Love You” sound familiar?). So yes, Pitchfork is right, there is no specific genre that Lizzo fits into. But the variety that she produces is one of the strongest features of her music.

Lizzo refuses to be put in a box, and she even advocates for the destruction of social norms that neatly wrap people into their own boxes. As the reigning leader of the Body Positivity Movement, her concert felt like a rally for self-love. She, along with her dancers, known as the “Big Girls,” together celebrated their plus-size bodies and attitudes, a monumental step forward for positive representation of body shapes that defy beauty norms. As she sings in “Better In Color,” body shapes, sizes and color “don’t matter to me, ‘cause I like everything.”

Her audience was a direct reflection of Lizzo’s love of variety. She commented on this from her onstage perspective, remarking that being a Lizzo fan doesn’t carry any physical requirement. Instead, she explained that being a Lizzo fan means loving yourself and striving to leave the world a better place than you found it. If you weren’t a true Lizzo fan when you got there, it was impossible to not have fallen in love with her by the end. Her last piece of advice: “If you can love alllllll of this … You can love yourself.”