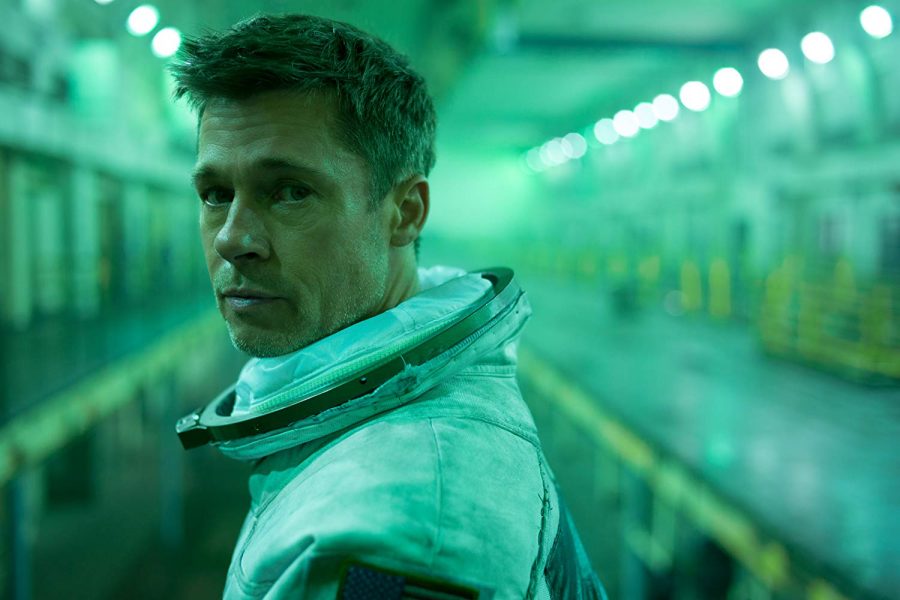 Who was really the star of Quentin Tarantino’s Once Upon a Time … in Hollywood? Nominally, it was Leonardo DiCaprio, or perhaps the bill was evenly split between himself and Brad Pitt. But if the last few months tell us anything, Pitt is the one experiencing a burst of attention, first as DiCaprio’s far more amusing stunt-double in Tarantino’s film, and now as the emotionally hog-tied astronaut in James Gray’s Ad Astra.

There’s a scene in Tarantino’s film where Pitt clamors up the roof of DiCaprio’s L.A. home to fix his satellite. He takes his shirt off, squints into the distance and relives his extended memory sequence. Our minds are rapt by his irresistible, easy charisma, a kind of admirable aplomb that releases emotions like savory crumbs of personhood.

Now, in the “near future” of Ad Astra, Earth is in a state of near-peril, pushed into space to look for livable alternatives. A colony exists on the moon (you can fly there commercially and even slop through a Subway sandwich in the airport), and manned missions to deep space serve as clandestine Hail Marys whose potential discoveries could extend human life. Roy McBride (Pitt) hasn’t seen his father, H. Clifford McBride (Tommy Lee Jones, CGI-ed, or not, to look about 300 years old), since he left to captain the Lima Project, a mission to Neptune in search of intelligent life. The elder McBride, a maverick astronaut wielding a doctorate from MIT, left Roy orphaned and his wife widowed, as he floated into isolation for the next sixteen years. Roy, robbed of emotional faculties, became an astronaut himself, re-purposing his trauma into unquestioned success. Now, surges of anti-matter thought to be sourced from Clifford’s ship have begun ravaging the solar system, and Roy must go out after his father to figure out if he is a threat. We are guided through the philosophical intricacies via Pitt’s over-dubbed narration, reflections that penetrate the film’s consciousness like adolescent elegies.

Ad Astra is a clash between father and son, a searching space opera under the guise of an intimate three-act play. Perhaps the space-scapes add gravitas (there are certainly enough homages to 2001, although the grand expanses of twinkling dots and drifting planets have diminishing effect), but the central human drama comes from something more like a Tracy Letts play, namely Ad Astra’s philosophical sister, August: Osage County. Pitt and Jones are convincing, though, and the film holds our attention basically thanks to Pitt’s eyes, the peerless withholding devices that they are. But even so, space seems like a device meant to roll the film over onto a higher register rather than an integral part. The light-years of distance portend less of an imperative than a reason for Pitt should just forget it.

Lindsay Zoladz recently tweeted, “every director should be forced to make a space movie,” which I agree with insofar as the best creative minds working should be urged to graft their aesthetic vision onto a genre that, too often, uses impressive FX to cloak or cure an average film. Moon, The Right Stuff, Interstellar, et. al. showed how directors (Duncan Jones, Christopher Nolan and  Philip Kaufman) could spin off the Kubrickian paradigm into gritty science-fiction, historical dialectics and mind-bending provocation, respectively. James Gray’s diverse filmography (The Lost City of Z, We Own the Night and Two Lovers — his best film, still) lends itself to experiment, and with Ad Astra he has transplanted Paul Schrader’s Affliction to space. The individual dramatic parts only feebly flow through the larger aesthetic circuit. At times, it becomes fatuous that Pitt must go all the way to Neptune to resuscitate himself, and we feel the weight of the means become incommensurate with the end. Jones could’ve easily been a distant-but-earthbound workaholic instead of an intergalactic explorer (with an “infinite amount of work to do”), but the film is determined to make its framework matter. Opposite that which occurs in Damian Chazelle’s First Man, in which Ryan Gosling returns from space estranged from his family and his world, Roy must travel 2.4 billion miles to learn how to emote and cathect.

Complaints levied, it still must be said that Pitt remains as uniquely captivating a screen presence as ever (although Joaquin Phoenix, a Gray favorite, may even usurp him there). Whenever Pitt’s mirthful stoicism flinches, it’s a moment of intense payoff, because it so rarely does. His eyes convey nearly all his emotion, as well as the occasional tugs at the corners of his mouth, like a droll Bond-figure stripped of the varnish. In Ad Astra, the naturally stripped-down Pitt is denuded yet again, remodeled entirely with monolithic sadness and repression. Pitt does well, but there are times where a slight smirk threatens his face, like he himself realizes the role, in embracing his tendencies, muted some of his greatest strengths.

It is a well-worn notion that we should invest in our world, not run from its difficulties, and that is what eventually becomes the animating idea behind Ad Astra’s slow-moving discovery. The deficiencies fathers pass down to their sons can only be remedied by honest communion, a kind of glancing truth-telling in a moment of unescapable intimacy. Tommy Lee Jones says he found his destiny and didn’t think of his life on Earth — his abandoned son, his widowed wife — for one second. What he found in the great unknown was a distraction from another, even scarier unknown: intimacy, the mounting uncertainties that are human relationships. What his son finally realizes, after his intergalactic chat, about those needy, myopic relationships is that the friction, and sparks, between men are closer to the divine than any other instance of intelligent life.