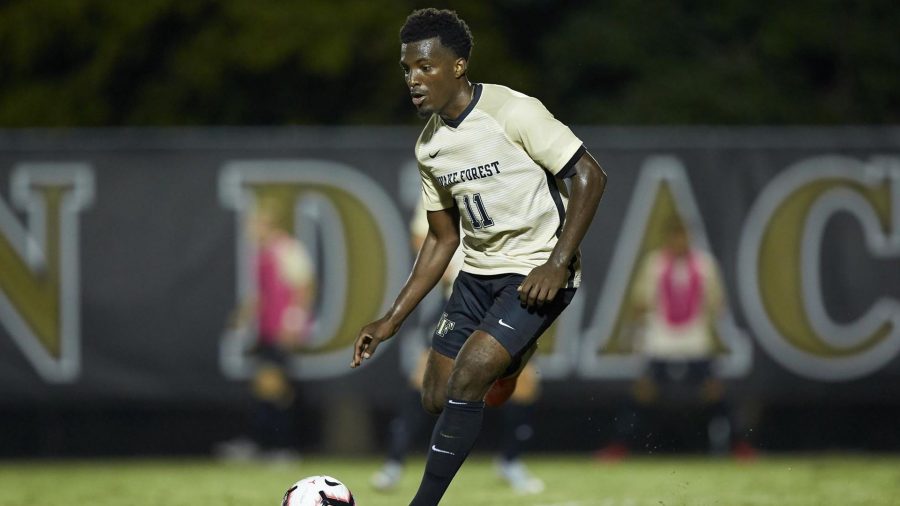 Wake Forest wasn’t down for long. After suffering their first loss of the season against James Madison University, the No. 7 Wake Forest Demon Deacons men’s soccer team bounced back with a pair of 1-0 wins over Syracuse and Davidson. Fans were on the edge of their seats for both matches as the Demon Deacons scored both of their goals in the second half.

The Syracuse game on Saturday night was Wake Forest’s ACC home opener. Before the game, as part of homecoming festivities, the Deacs honored the 1989 ACC championship team for their 30th anniversary.

The first half was scoreless despite the Demon Deacons and the Orange combining for 11 shots. Wake Forest’s best opportunity of the half came in the 10th minute when senior Alistair Johnson received a pass down the right side of the field and dribbled it towards the upper corner of the box. The Syracuse goalie came out too far and Johnson kicked the ball past him, but the ball was just too far to the left of the net so the match remained scoreless. In the second half, Wake Forest found new life on offense.

“We were able to play off the higher guy better” said Head Coach Bobby Muuss after the game. “I thought we combined it with our wingers and our forwards much better in the second half.”

After not scoring in their previous 191 minutes, Wake Forest finally broke through in the 63rd minute with a goal from Justin McMaster off of a Machop Chol assist. Chol beat a defender on the right side of the box and dribbled towards the goal line. He then gave a hard cross on the ground towards the middle of the box that McMaster was able to fire past the goalie.

“On the final goal I was trying to hit the box, trying to run the near post, and the defender started to pull me,”McMaster said. “So I stopped and let him go. Then Machop played a beautiful cutback ball, and I just finished it off”

Wake Forest finished the game with 57% of the ball possession. Additionally, the Demon Deacons finished with a 13-8 shot advantage, which included a 4-1 advantage on shots on target.

Despite notching a goal in the last quarter of the game, Wake Forest continued to press forward and take aggressive shots even at the very end.

“What we did [score] with five minutes left, the way we were going forward like we were down a goal, we got to learn from these experiences. We have to put the foot on it and kill the game off,” Muuss said about the team’s mindset. “We can’t be in an end-to-end game with Syracuse when they’ve got nothing to lose, and we have a lot to lose being up a goal.”

With the win, Wake Forest improved to 2-0-0 in the ACC and are tied with Clemson at the top of the Atlantic division. Wake Forest’s second game of the week was an away game at Davidson on Tuesday night. After another scoreless first half, the Deacs broke through at the end for another 1-0 victory. It was the second clean sheet in a row for goalie Andrew Pannenberg.

The first half was relatively quiet. Wake Forest had five shots and four corner kicks but were unable to convert any into goals.

During the second half, Wake Forest got off 10 shots compared to two from Davidson and finally broke through in the 78th minute off the play.

Two freshman, midfielder Omar Hernandez and defender Nico Benalcazar teamed up to put the Demon Deacons ahead. Hernandez took a corner kick from the right side. He hit a high cross that Benalcazar was able to head in to give Wake Forest the 1-0 win.

It was Hernandez’s third assist of the season and Benalcazar’s first career goal. Benalcazar, who has played all 90 minutes in six of Wake Forest’s games this season, has gotten off to an excellent start playing like someone with years of collegiate experience.

In their eight games so far this season, Wake Forest has seven wins and five shutouts. The Demon Deacons look to continue their strong play as they enter the heart of conference play. Their next game is against fellow division leader Clemson at Spry Stadium on Saturday night at 7 p.m.