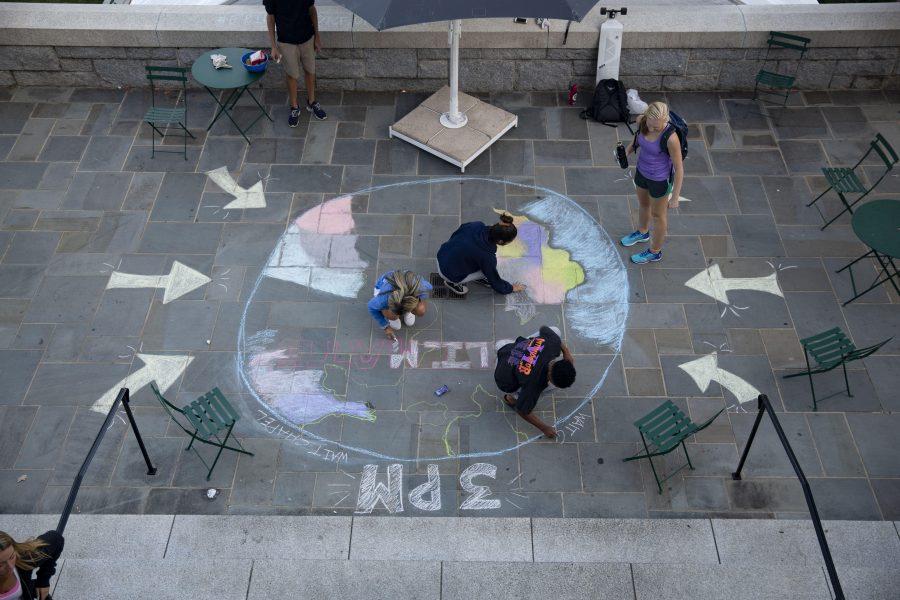 While climate change has served as a polarizing issue in American politics, young people on campus and around the world united to express urgent demand for action during the Sept. 20 Global Climate Strikes.

Climate Strike WFU was one of thousands of global strikes inspired by 16-year old Swedish climate activist Greta Thunberg that brought millions of people together on Friday to demand action just ahead of the 2019 United Nations (UN) General Assembly. A special Climate Action Summit on Sept. 23 addressed the top priority of this year’s UN meeting — the global climate emergency.

“Someone had to do it, and I was scared if it wasn’t me, no one would,” said Sakina Barthe-Sukhera, a sophomore who organized the Wake Forest strike.  “People feel like they’re hopeless about this situation, and I don’t think it’s time to be hopeless yet.  If we can act now, we can reverse what we’ve done.”

In October 2018, the Intergovernmental Panel on Climate Change (IPCC), the UN’s climate science body, released a report warning that only 12 years remain to address this defining issue of our time. If continued at the current rate, greenhouse gas emissions will cause the atmosphere to warm by as much as 2.7 degrees Fahrenheit by 2040, a point at which IPCC scientists warn will result in global damage, intensifying natural disasters and poverty, displacing millions of people and costing $54 trillion.

Nearly one year later, on Sept. 23, Antònio Guterres, Secretary-General of the UN, called upon world leaders to present their nationally — determined plans to reduce greenhouse gas emissions by 45% by 2020 and to net zero emissions by 2050.

The United States, given its vow to pull out of the Paris Agreement, failed to provide any form of commitment to climate progress.

At Wake Forest, we do not have to go far to witness the impacts of climate change.

“North Carolina is on the front lines of the increasingly devastating hurricanes that we’re experiencing, and these hurricanes are going to keep getting worse because of climate change,” said Terri Legrand, who is working with the Climate Reality Project to pass a resolution within Forsyth County to commit to 100% renewable energy. “We have to continue to fight and use whatever tools each of us has.”

Wake Forest students embraced the opportunity to mobilize with other students who share similar concerns for this issue in order to not only follow the global trend of youth mobilizing to urge world readers to address the warming planet, but also to demonstrate to the administration that this is something the campus community cares about.

“It’s very important that this be something that genuinely comes from your generation,” said Stan Meiburg, Wake Forest’s director of Graduate Sustainability Programs and former Acting Deputy Director for the Environmental Protection Agency (EPA). “People of my generation are moved by things that are going to affect our children and grandchildren, and that is a useful mobilizing force in moving beyond information to action.”

As talks of a climate strike loomed on campus, Barthe-Sukhera battled concerns of opposition, particularly during the university’s all-consuming focus on homecoming details. Despite faculty apprehension, students were still determined to organize a demonstration.

“This may be my French blood speaking, but there’s a stigma with strikes here in the United States,” said Barthe-Sukhera. “In other countries, the moment they’re upset, people go out and raise their voices. As Americans, we have freedom of speech, but we’re scared to exercise it. We’re scared to support what we believe. Instead, we hide in the shadows.”

At 3 p.m., students walked out of the classroom to mobilize on campus. Starting at Wait Chapel, more than 40 Wake Forest students and faculty members marched from upper to lower quad chanting “our planet, our future.” The route paraded through Reynolda Hall homecoming celebrations, recruiting alumni, faculty and students along the way to join in the fight for climate change action. A speak out followed the strike, allowing protestors to vocalize sentiments both of concern and steps for action.

Despite shared feelings of hopelessness around the climate crisis, students speaking out following Friday’s strike shared the consistent message that voting matters. The question remains whether youth-mobilization will be enough to prompt rigorous, organized policy change that ensures a path forward. Will global calls to action overcome persistent polarization and be met with urgency?

“This is the one particular issue our generation cares about, and when you go to vote, this is what you’re voting on,” said sophomore protestor Jason Gaaserud. “It’s a warning that there’s a limited future for anyone who is going to stand in the way of progress in solving climate change.”