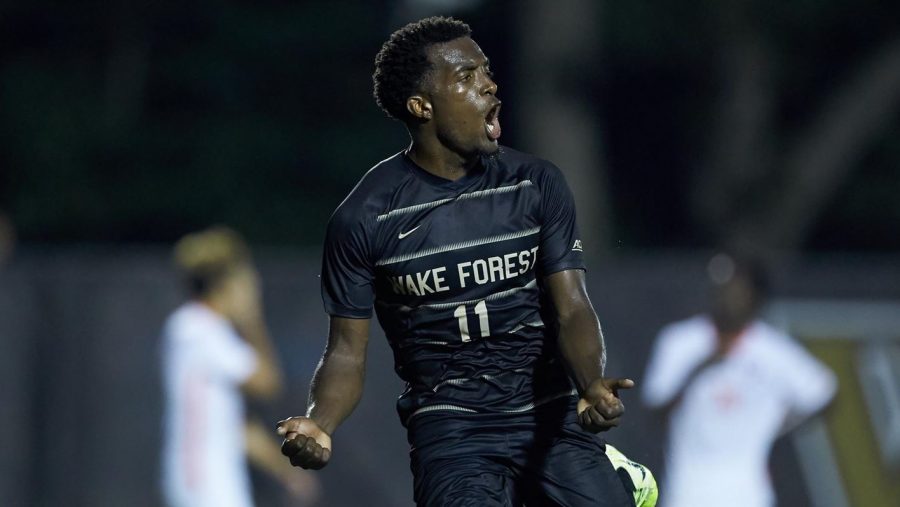 With the score tied at two a piece in overtime against the No. 4 Clemson Tigers, the No. 7 Wake Forest Demon Deacons Men’s Soccer team was on the attack early.

Then, just 76 seconds into extra time, the Deacs drew a penalty kick after the Clemson goalie fouled Wake Forest midfielder Justin McMaster in the box. Zarris, a sophomore midfielder, immediately knew that he wanted to take the PK.

“Right as we got that penalty I just had that feeling. I was like, ‘man, I want to put this away,’” Zarris said after the game. “I went to Bruno [Lapa] who typically takes the PKs for us and said, ‘Bruno, I feel confident in this.’ Credit to him, he let me take it and trusted in me. That takes big leadership as a senior, to give it to somebody else. So credit to Bruno Lapa and credit to the team. We grinded through this game.”

Zarris’ shot couldn’t have been better. He fired the ball to the right side of the net in the air, leaving the goalie no chance to stop the scorching shot. As the ball hit the back netting, the sold-out crowd of more than 4,100 at Spry Stadium erupted in a deafening roar as the Deacs pulled off the 3-2 victory.

The Deacs showed exemplary heart and passion in the victory. After falling behind 1-0 and 2-1, Justin McMaster tied the game up in the 85th minute to force overtime.

“This is probably one of the proudest moments I’ve had as a coach with this group with the character that just showed and the mentality they showed,” said Head Coach Bobby Muuss. “I’m just really happy with how the guys kept grinding.”

The top 10 match-up lived up to the billing and then some. Clemson entered the match with an undefeated record behind their potent offense. Coming into the match, Clemson led the nation with 33 goals. Additionally, the Tigers had two of the top goal scorers in the nation,  Kimarni Smith, who led the nation with nine goals, and Robbie Robinson, who was tied for second with eight.

Both teams played with high energy at the start of the first half, combining for 11 shots, with seven by Clemson and four by Wake Forest. The score looked like it would be 0-0 going into halftime, but Clemson’s Kimarni Smith broke the stalemate with a goal in the 42nd minute. Clemson midfielder Tanner Dieterich passed Smith the ball a few yards outside of the box on the right side of the field. Smith used his left foot to fire it just inside the far post of the Wake Forest goal.

In the second half, Wake Forest came running out of the gate and scored in the first five minutes of play. Junior forward Machop Chol scored his second goal of the season off a Justin McMaster assist. McMaster gave Chol a high pass that got behind the defense. Chol then broke away and was one-on-one with the goalie. He skillfully dribbled past the goalie and then hit a hard shot on the ground that found the back of the net to tie the game up at 1-1.

“Once I got one-on-one with the keeper I knew I was going to score,” Chol said.

Clemson retook the lead in the 63rd minute. A corner kick landed in the middle of the box, and Clemson’s Mohammad Seye kicked it towards the goal. Wake Forest goalie Andrew Pannenberg stopped the shot, but couldn’t hold onto it, which allowed Clemson’s Oskar Agren to kick the rebound in for the goal to make it 2-1.

Wake Forest ramped up the pressure late in the game and broke through when McMaster scored in the 85th minute. Chol was dribbling down toward the goal line a few yards to the right of the box. He was about a foot in front of the goal line when he unleashed a beautiful cross to the center of the box. McMaster one-timed the ball in the air and sailed it past the goalie to even up the score.

The match ended regulation at 2-2 and then went to overtime where Zarris scored the winning goal.

Muuss highlighted the performance of McMaster and Chol, who each ended the game with a goal and an assist.

“Our key guys in the attacking third showed why we expect so much of them tonight. Justin [McMaster’s] performance and Machop Chol’s performance [were] just fantastic,” Muuss said.

Wake Forest’s next game is at Boston College on Oct. 4. After the weekend, the Deacs rose to No. 3 in the polls.

two games and getting over the Miami game and preparing well for this one emotionally.”