“How I Learned To Drive” Takes A Unique Perspective 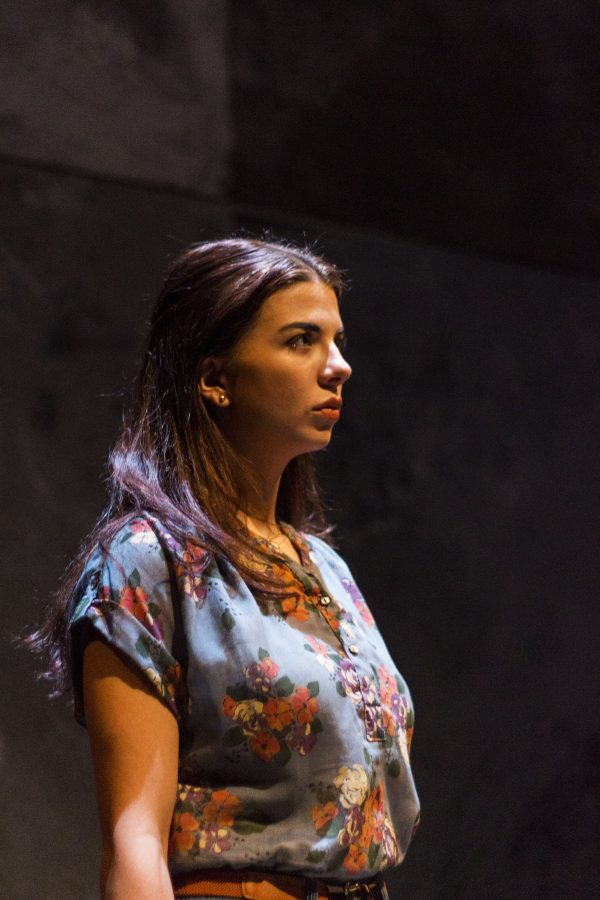 Despite the fact that it discussed themes prone to cause any audience discomfort, I found How I Learned to Drive to be anything but hard to watch. That is to say, thanks to the cast’s enthusiastic and passionate performances and Brook Davis’ visually engaging direction, this production depicted Paula Vogel’s poignant, and oftentimes comedic, story with a sincerely touching delivery.

The play narrates the progression of central character Li’l Bit (played by sophomore Lainey Drake) as she grows from child to young adult amidst an overtly sexualized familial relationship, which is most troubling and pertinent with her Uncle Peck (46-year-old actor from Winston-Salem, Ben Baker). Though we’re shown how Li’l Bit is coerced into abiding by her uncle’s pedophiliac desires and how she eventually comes to combat that, this development is not presented linearly.

The play is largely told in reverse order, beginning with Li’l Bit at 17, regressing through age 11, when she was first touched by Uncle Peck, though it intermittently jumps forward to Li’l Bit at 18 and also includes a scene in which Uncle Peck preys on a younger cousin BB (senior Matthew Crawford). The play also included several interludes from Li’l Bit’s experience, in which characters would directly address the audience to offer explanations, tips and even songs (which I must say, were very well performed).

How I Learned to Drive was unabashedly forward in how it approached its sexual themes. It, for the most part, avoided metaphor and instead had characters casually discuss the topic or speak directly to the audience in passionately raw monologues.

And considering how blunt the play is, it’s a wonder how, at many times, it felt quite light-hearted. The way in which its characters comfortably address what is typically taboo in a family setting, such as when we are introduced to Li’l Bit’s family, and they are sitting around the dinner table making a joke of sexualizing her features, you are naturally drawn to laugh, but made uncomfortable at the thought of doing so. Many times the play does this; it provides a perspective, giving you a unique and thought-provoking look at the experience of a sexually mistreated child.

Li’l Bit’s interactions with her uncle exemplify this on another level. By allowing us to see every detail of their conversations, we are almost allowed to commandeer the perspective of that powerless child; we are given the full brunt of Uncle Peck’s coercion, which pulls us away from what we know about a predator’s malice and draws us in just the same as Li’l Bit. We see Uncle Peck, his friendly nature, his supportive spirit and are in many ways drawn to like him, and once you begin to realize that you’re this close to an undoubtedly evil man, his presence is made that much more disturbing. Vogel produces a penetrating vulnerability that allows you to begin to understand the powerless despair that Li’l Bit feels, and as the play progresses and you see her get drawn into Uncle Peck’s grasp, already knowing the outcome, it only becomes more gripping.

By the end of the play, once Li’l Bit denies her Uncle the ability to further control her, you feel glad, yes, but more so a residual sense of sadness, regret, even shame. Vogel accomplishes with this play what many others have not, or perhaps would not dare to. She pulls you into a world where you are captive, uncomfortably close to that which we’d normally avoid thinking about on such a personal level. You are pulled through this paradoxically positive space that is seemingly ignorant of the weight it carries, that which you feel hover above you as you are distracted by dazzling personalities and showmanship. And after it all you are left without a happy ending. But why should there be one when you are given such an otherwise unyielding experience, when no victim of sexual harassment would be given the same, when so many are left without a satisfying or relieving happily-ever-after?

Needless to say, this show was resoundingly powerful, and I applaud the cast and crew for so thoughtfully crafting and sharing the experience. I’m always thankful to experience art that has something so meaningful to say, and I feel that in this case it was done with admirable prowess. Undoubtedly, it was one of my favorite productions so far. Bravo.