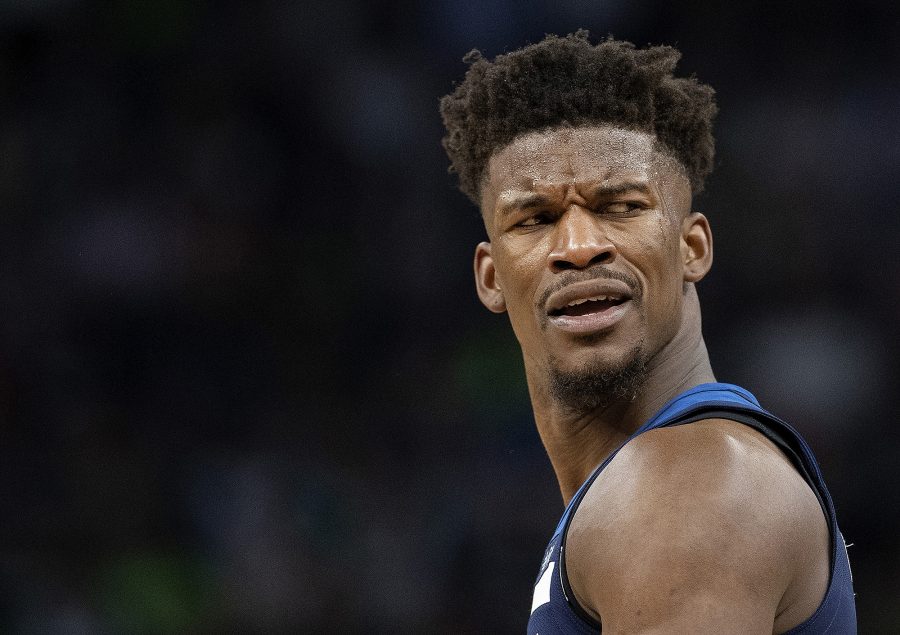 The Minnesota Timberwolves' Jimmy Butler reacts to an official's call during a playoff game against the Houston Rockets on April 23, 2018, at the Target Center in Minneapolis. (Carlos Gonzalez/Minneapolis Star Tribune/TNS)

Whenever a really amazing NBA team has a good chance to get deep into the playoffs, but they just need one more piece to push them over that championship edge, the general manager always looks to find that missing good piece to take them over the hump — The kind of player that isn’t going to be able to carry a team in the same way like a superstar would, but is an important complement to a superstar or multiple superstars. Think of a player like Ray Allen on the 2012-2013 Miami Heat, who sunk the game-tying shot in game six for the Heat in the Finals that year.

Last season had a lot of clear examples of this kind of player. Marc Gasol’s mid-season addition to the Toronto Raptors’ roster proved to be a very beneficial move for them. The Philadelphia 76ers added all-star caliber players Tobias Harris and Jimmy Butler to their roster as well in order to add some spacing and shooting to the team. The Warriors added an injured Demarcus Cousins to have more size and shooting in the paint. These kinds of player additions are not uncommon in the NBA today.

When in a player’s career does it become clear that they will never be able to be the franchise cornerstone for a championship-caliber team? It seems that this often happens in a player’s early years, or at least when they’ve experienced some kind of minimal success with subpar teams. This role can make itself evident when an all-star, like Jimmy Butler, moves to a team with other all-stars or a superstar. It seems that Butler is perhaps the quintessential piece that always seems to be hyped up by the media as the trade to push a team to the next level. Yet, with Butler’s recent offseason move to Miami, it seems that he is rejecting this second-wheel role. It’s so clear from his brief stint in Philly that if Butler ever wants to win a championship he cannot be the main scorer or sole all-star. He is a talented, experienced and hard-working player that can excel at a lot of things but he will never be the kind of player of Kawhi Leonard or LeBron James’ caliber that, by just simply being on the roster, automatically elevates the team to championship contenders status. It’s also not like we haven’t seen this experiment before with Butler.

Though two seasons ago might feel like a long time in the past, Jimmy Butler was for a time the leading scorer for the Minnesota Timberwolves. During his time there, the team’s locker room was riddled with drama. And who was the source of the drama? None other than the hard-working and diligent Butler. He publicly called out his teammates’ work ethics to the media in numerous occasions. Part of the reason why Butler even wanted to go to Minnesota was that his old Chicago Bulls coach Tom Thibodeau, was the head coach for the Timberwolves. Even Thibodeau was not safe from being a target of Butler’s antics. Even in Philadelphia, there were some small moments of drama surrounding Butler’s relationship with the organization and his teammates. It seems that Butler has a very high standard of work ethic. And considering the young average age of the rosters in Philadelphia and Minnesota, it seems that the same might happen to the young Miami Heat team as well. If Butler cannot accept his backseat role and learn to play well with his teammates, he seems doomed to be wandering from team to team. Good enough to carry them to the playoffs, just to be dominated in a first round exit.