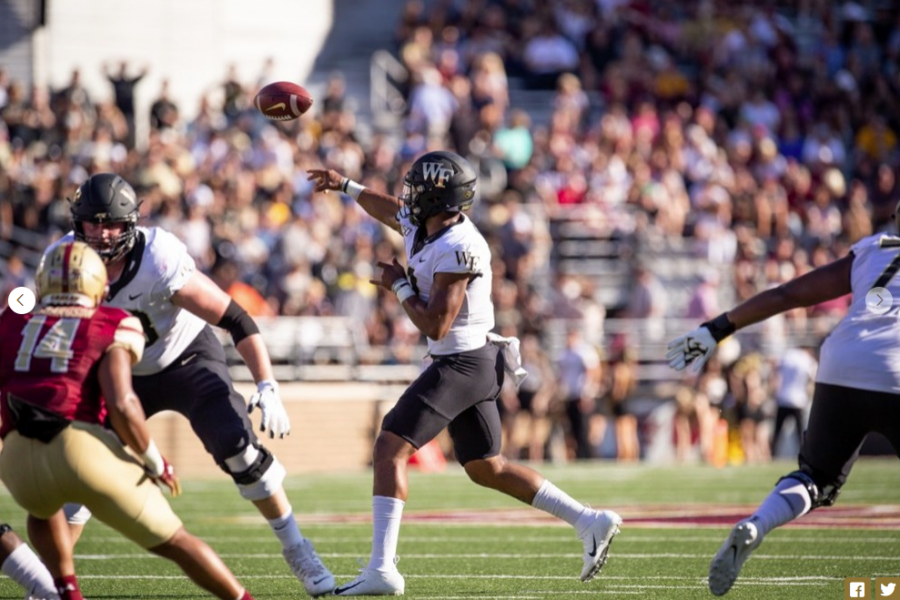 If you’ve ever been around the Wake Forest football team, attended a game or encountered some of their merchandise over the past few years, chances are you probably have seen these words before.

On Saturday, the latest achievement of their six-year rebuilding project under Head Coach Dave Clawson came after a gritty 27-24 road win against division rivals Boston College (3-2).

The Demon Deacons achieved their first 5-0 start to a season since 2006, the year they won the ACC Championship and went to the Orange Bowl. This is also the first time since 2008 that the Demon Deacons are ranked in the AP top 25 poll, coming in at No. 22 as the second-best ACC team in the poll (Clemson is ranked No. 2).

Despite being early favorites by nearly a touchdown for the matchup against Boston College, Wake Forest found itself in a down-to-the-wire affair at Alumni Stadium.

Quarterback Jamie Newman had another solid performance, throwing for 243 yards and two touchdowns, while adding another 102 yards on the ground. This was not one of the most explosive games by Newman stat-wise, but the adage of stepping up when it matters the most held true once again for him.

On third-down, Newman completed 10 out of 14 passes for 132 yards, eight first downs and two touchdowns. As a team, the Demon Deacons were tremendously efficient on third down, converting 17 of 24 third-down attempts, making it a 70.8% conversion rate.

“Every week we come up with a ‘big three’ for each side of the ball. On offense, one of the big three was third-down conversions. We knew we had to stay on the field against [Boston College], because of what they do on offense and the way they can three yard, four yard and five yard you to death with those big backs and that big offensive line,” Clawson said to Les Johns from 247sports. “That was so important that we convert third downs, more than anything to give our defense rest. That is not a crew where you want to be back out there in two minutes.”

Newman’s increased involvement in the running game was a surprising change for the Demon Deacons on third down. During its first three games of the season Wake Forest has struggled on third down and short situations.

“If you [noticed], we changed up what we were doing in short-yardage today. We made substitutions and played with more tight ends. We used Cade [Carney] as a lead blocker … With all the good things we have been doing, we weren’t happy with short-yardage and that kind of stuff,” Clawson said after the Boston College game. “Give our offensive coordinator Warren Ruggiero a lot of credit. He works like crazy and fixes problems. He came up with a different package today, and I think we were perfect on short-yardage today.”

Newman rushed 23 times against Boston College and was able to pick up five first downs through the ground in mostly designed QB runs. Perhaps, a bigger role for him in the running game might be the solution to mitigate some of the early season problems moving forward.

The Eagles were also able to establish their running game, powered by All-ACC running back AJ Dillon who had 159 rushing yards on 23 carries. Yet, the stark difference between the two teams came in execution on the most crucial down. The Demon Deacons were able to hold Boston College to a paltry 2-12 conversion rate on third down.

“We had several third downs that we struggled to get off with, but we also made several plays as well,” said Boston College Head Coach Steve Addazio. “We were number two in the conference on offense on third down conversions, but, today we were not as effective on third down as we have been this season.”

Boston College had more total yards (533 to 440) and first downs (25 to 22) than Wake Forest. Yet, the Eagles also turned the ball over more (three times) and had less ball possession (24:09 to Wake Forest’s 35:51), which are the two main areas to effectively counter a ground-and-pound, ball-hogging offense like the one employed by Boston College.

The Eagles were an extremely physical team and being able to grind down the clock against a team that is traditionally known for eating up ball possession is another great testament to the maturity and focus the Demon Deacons have displayed this year.

With great offensive weapons on the outside in receivers Sage Surratt and Scotty Washington, an efficient quarterback in Newman and an experienced, deep roster on both sides of the ball, this Wake Forest football team has all the ingredients for a special season. Wake Forest fans should feel very good about where this team stands heading into a bye week.