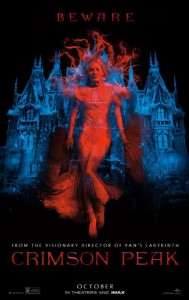 In Guillermo del Toro’s much-anticipated new horror flick,Crimson Peak, what you see is what you get — but what you see is pretty amazing. Del Toro brings his unique vision and eye for beauty and creates a set filled with luscious colors, extravagant special effects and gorgeous costumes. Even the ghosts were grotesquely beautiful.

The movie begins in New York at the turn of the 20th century — our heroine, Edith Cushing (Wasikowska) does not arrive at Crimson Peak until very late in the movie. However, the first act is still visually lush and enjoyable, if not particularly horror-laden. It also gives the audience a nice development of Edith’s character, an aspiring author who is by turns a daddy’s girl and an independent woman. Oh yeah, and sometimes she sees ghosts.

Because this is a Gothic movie that follows Gothic novel tropes, Edith’s mother is, of course, dead. Edith’s mother is the first ghost she sees, appearing to deliver a hiss of a warning: stay away from Crimson Peak. Edith has no trouble doing just that for more than an hour, until her father dies (wouldn’t you know it, his skull was crushed by a “fall” in the bathroom) and she marries the landed, slightly sinister and definitely swoon-worthy Thomas Sharpe (Hiddleston).

Edith moves to Thomas’s English estate, which is both roofless and also sinking into the red mud upon which the Sharpes once made their fortune. Upon her arrival, Edith begins her power struggle with Thomas’s creepy, controlling sister, Lucille (Jessica Chastain), who does not want to be replaced in her role as lady of the house. To make matters worse, on Edith’s first night in her new home, she discovers that the sounds that awaken her are not simply the creaks and groans of an old house: the estate is haunted, and Edith sets out on a journey to find out who is haunting it and why.

Wasikowska is delightful, as usual; it’s hard not to root for her character, a strong, intelligent woman who has been conned into a horrific situation. Hiddleston is perfect, primarily because he has the emotionally complex villain act down. Not as present in the trailer but also excellent were the performances of Charlie Hunnam as Dr. Alan McMichael, a family friend who has been in love with Edith since childhood, and Jim Beaver as Carter Cushing, Edith’s brusque and delightfully American father.

The weakest link in the main cast was Chastain, perhaps because of her accent, which was about as British as Abraham Lincoln eating a hot dog on the Fourth of July. Her character was unsettling in premise, but Chastain couldn’t follow through in making her seem appropriately terrifying.

One thing the movie did particularly well: literary allusions. The literati will not be disappointed; references to Gothic literature are rife. My favorite allusion is in Sharpe’s proposal to Edith, in which he paraphrases one of Mr. Rochester’s most famous speech to Jane Eyre (never trust a man who a) can’t make up his own damn proposal and b) plagiarizes Mr. Rochester, a man who has a boatload of emotional baggage and hides it all in the attic — literally). Yes, the movie was predictable, but that was partly because you’ve read or seen a version of this story before. It’s a fun film,  although it might not be the scariest or most thought-provoking. Still, del Toro’s incredible set and intelligently frivolous plot make it worth a trip to the theatre.