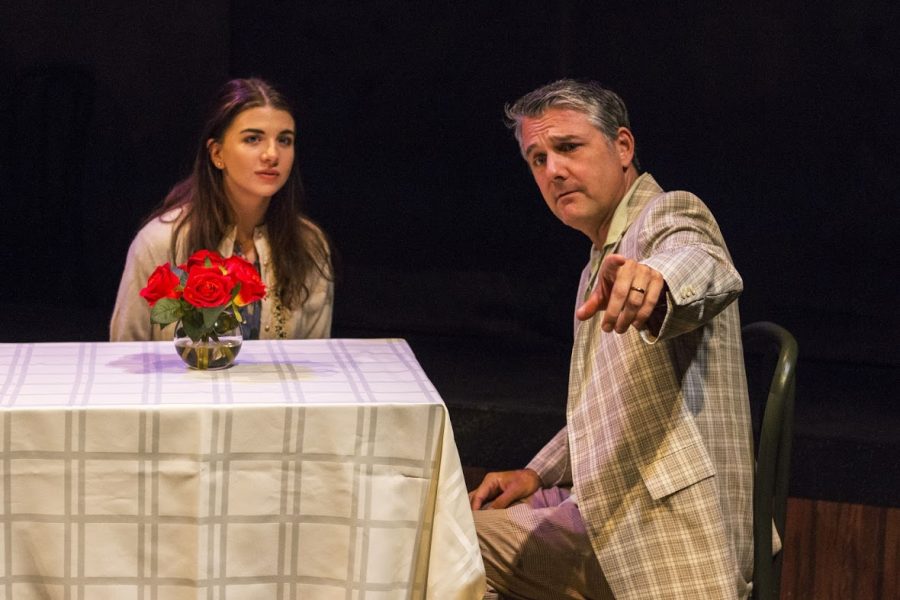 Tears ran down the faces of audience members last Thursday night at the Ring Theatre as student actors created a communal, public space to engage with some of the most private, personal aspects of the audience’s lives.

After performing How I Learned to Drive, cast members joined director Brook Davis on stage to discuss how the play’s themes have impacted Wake Forest’s campus.

“The whole world is complicit in what happened to Li’l Bit,” Davis said. “This is about our society that continues to allow sexual assault to happen. That won’t change without this conversation.”

The Pulitzer Prize-winning play, written by Paula Vogel, is a heartbreaking and unsettling tale that follows Li’l Bit as she untangles the complex cobweb of childhood memories rife with abuse inflicted by her Uncle Peck. The play acknowledges how women are manipulated by their abusers and by society and is a reminder of the importance of owning one’s truth, but also how difficult that process can be.

Sexual assault is an important topic to Davis, who knew this play would be risky but made the decision in May when the #MeToo movement was gaining steam on college campuses.

“I made the decision when the world was really broken and people were angry and frustrated,” Davis said. “This play, it’s about some really tricky stuff, but it’s also about resilience and fighting against the negativity of the world.”

The cast knew that preparing for this play would be difficult. Sexual abuse is already a sensitive topic without the complications of incest.

“Every night I would cry,” said Lainey Drake, a sophomore who starred as the play’s lead, Li’l Bit.

Davis hired an “intimacy” choreographer who helped Drake and her co-star, Ben Baker, a 46-year-old actor from Winston-Salem who played Uncle Peck, become more comfortable with one another.

“[The choreographer] helped us approach intimacy in a safe way by establishing boundaries with our bodies,” Drake said. “She told us that our body is our instrument and you need to take care of it. Actors are allowed to say ‘no,’ to scenes that make them uncomfortable. We still need to feel safe in our bodies.”

“We would say ‘button,’ whenever we felt uncomfortable,” Baker said. “We would immediately stop the rehearsal and discuss what happened. We’re lucky, though. Survivors don’t get to prepare for that situation.”

Muffled sobs could be heard throughout the Ring Theatre as the play progressed. Emma Merlin, a senior, was among those in tears. Several other audience members around Merlin were holding onto one another while others struggled to hold back tears.

“The connection I felt with the actors was powerful,” Merlin said. “These are conversations we need to be having with our friends.”

The set was designed to foster the audience-actor connection that Merlin felt.

“One of the impactful things about being in the Ring Theatre is how intimate it is,” Drake said. “I can see the audience’s faces. We see people crying. We lock eyes and connect on that deeper emotional level that only happens when you allow yourself to be vulnerable. Once connected, that conversation flows easier.”

Creating a campus-wide conversation about sexual assault and the complexity and specificity involved in each case was an original goal of the cast.

“I think it’s such a brilliant play because it can dredge up things from the past. Once you confront that trauma, you can start healing,” said Tut Gregory, a senior cast member.

The cast members dangled their feet off the edge of the stage as questions winded down. They looked emotionally and physically exhausted, like they had just been in a fight.

“We are in a fight. We’re fighting the evil in the world,” Davis said. “Fighting the negativity is kind of like putting your foot on the gas and flooring it.”