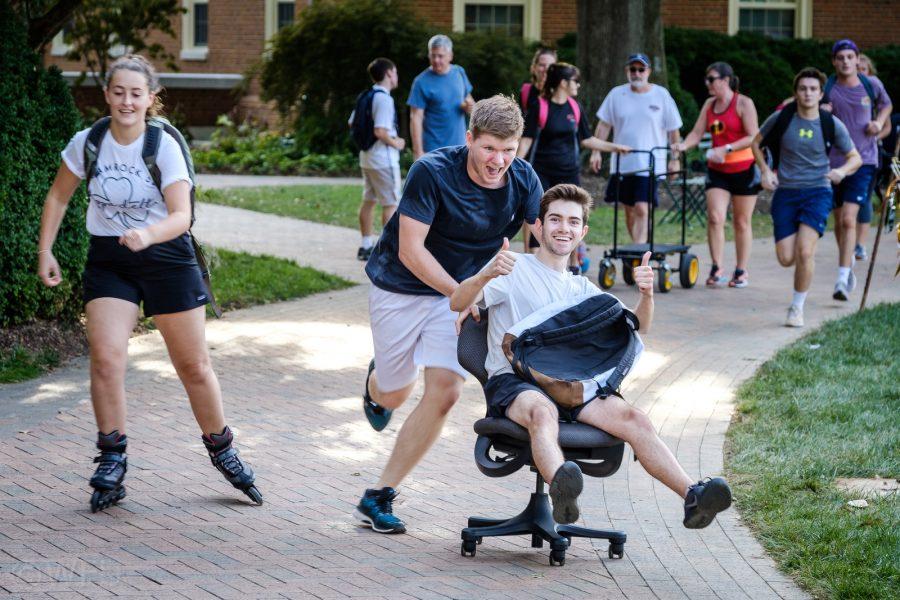 Members of the Wake Forest community raise money for cancer research in the annual Hit the Bricks for Brian event on Hearn Plaza on Thursday, September 26, 2019. The event is named for Brian Piccolo, and teams run laps on the quad to raise money.

Brick by brick. That’s how students, faculty and staff at Wake Forest raised money for cancer research from 11 a.m. to 7 p.m. on Thursday, Sept. 26.

This year’s Hit the Bricks event was no different from the first annual relay race held in 2003, as campus groups and athletic teams eagerly ran or walked laps around Hearn Plaza. School spirit was present in the little gold and black flags surrounding the Upper Quad. Water stations were also available to keep participants hydrated on this warm fall day, as baton bags were passed and laps were completed.

“Hit the Bricks is such a unique Wake Forest tradition,” senior Logan Foster said. “I’m not sure there are many other universities whose students put something like this together.”

Hit the Bricks allows students to help not just the Wake Forest community but Winston-Salem as well. The Bryan Piccolo Cancer Research Fund was started by students in 1980 in memory of the former football star and 1965 graduate of Wake Forest. Since then, over $3 million has been raised for the fund to support patients and their families at Wake Forest Baptist Health.

One of the big ideas surrounding Hit the Bricks is building campus community. It allows students to cheer for their friends while raising both funds and awareness for cancer research. The Wake Forest community could be seen from the various tents set up as group members waited to do their laps. The event allowed students to take a break from school and homework to have some fun as they raised money towards finding a cure for cancer.

“It is so awesome to see how Hit the Bricks brings all of the campus organizations together for such a great cause,” sophomore Stevenson Cerisier said.

Paige Nordland, a senior and director of Hit the Bricks, was responsible for much of the planning that went into making the event happen. She decided to get involved because during her time at Wake Forest she has had two professors deal with cancer, and she felt this was the best way to honor them.

“To me, Hit the Bricks means the campus community coming together in support of a common cause that affects everyone in different ways,” Nordland said.

Students, faculty and staff all had different reasons for participating, but everyone was helping to achieve a common goal. Many of them couldn’t pass up the opportunity to support cancer patients and their loved ones.

Cancer has impacted so many individuals, and this event was created to hit the bricks for those who can’t. The final lap was silent to give everyone a chance to think about and remember who they were participating for.

“One my sorority sisters lost her mom to cancer last year,” said Eliza Jane Stamey, a member of Kappa Kappa Gamma, “so this event was a great opportunity for all of us to show our love and support for her or anyone else who has been affected by the disease.”

As the event came to a close, everyone gathered around the stage in front of an illuminated Wait Chapel. Every year, luminaries are placed on the steps to honor the people Deacs know who have survived or lost the battle to cancer. Paige Michels, a member of the dance team, shared the story of her mother losing her battle with cancer. Michels ended her tearful speech with how thankful she was to have the chance to keep her mother’s spirit alive.

Hit the Bricks staff members recognized the teams who raised the most money and ran the most laps. Over $70,000 was raised by this year’s event. They also shared their gratitude for everyone who contributed at some point during the day.

“When I think about Hit the Bricks, it means being able to do something small that has a big impact on so many people,” said senior Dylan Solomon.