“From The Ground Up” Features Staff 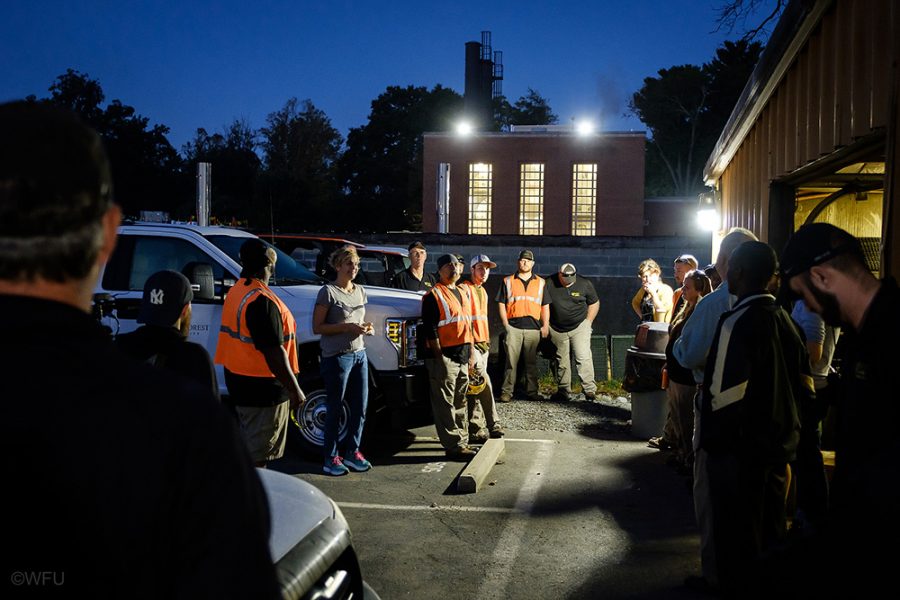 The Forklift Danceworks company, led by Wake Forest alumna Allison Orr ('93), follows landscaping staff on their morning duties as part of an artist-in-residence program on Wednesday, September 19, 2018. The company will work with facilities staff to create and stage a dance program in the fall of 2019.

Beginning at 7 p.m. on Oct. 3, Hearn plaza will bear witness to a three-day event unprecedented in Wake Forest’s history, featuring original choreography and live music. The stars of the show are 71 members of Wake Forest Facilities and Campus Services, including staff from custodial, fire, maintenance and utilities, landscaping, turf, construction and waste management.

The show is called “From The Ground Up,” and is organized by Forklift Danceworks, a dance company based in Austin, Texas.

It will run from Oct. 3-5, beginning at 7 p.m. each evening. Allison Orr, the organization’s artistic director and an alumnus from the class of 1993, described their methods of choreographing the show.

“Mainly what we all do is chat and get to know the employees. The employees are the ones who make the show,” she said. “It’s their work and their movements that are featured. This is really critical for our process because it’s really important that the performers have agency and feel like their stories are told in a way that they would like.”

Orr described the preparation for the show as lengthy, saying that Forklift takes all the time necessary to build relationships and community with participating staff members. She said the show is almost three years in the making.

Funded by a national grant from the New England Foundation for the Arts, this will be the second show in a series of three performed at college campuses across the country. The first premiered in 2018 at Williams College in Massachusetts. The impetus for Wake Forest’s rendition came from a class taught by Christina Soriano, director of dance, and Cynthia Gendrich, professor of theatre and director of the Interdisciplinary Performance and the Liberal Arts Center (IPLACe). The class helped plan and design the event, while the professors teaching it reached out to Orr and John Shenette, vice president for facilities and campus services.

“We’ve always conceived of this as a campus-wide initiative and endeavor,” Soriano said. “These people are a huge part of what makes [Wake Forest] go. Seeing, honoring and valuing their work is what this collaboration is about. I’m excited to see how the campus responds. It’s so fitting with Pro Humanitate.”

The show includes a live band, original music and two sets built on trailers depicting dorm room and bathroom walls. The sets will be donated to Habitat for Humanity once the show ends.

Staff participating in the show went into further detail about what the show entails. “Each department is doing three to four minutes of the show,” said residence life staff member Cynthia Wilson. “Housekeeping, landscaping, everybody gets to do a little part.”

She said that most facilities members were skeptical when the show was first promoted by Shenette, but that they looked forward to it when rehearsals began on Oct. 1.

Elizabeth Horton-Berry, a campus horticulturist, elaborated on the show’s design: “[Each portion] is like a little vignette of what we do during the day. Of course we can’t show everything that we do. But for the audience, I think it will be amazing to see. Our work doesn’t just magically happen. We’re the ones that make it happen.”

Ria Matheson, a senior in Soriano and Gendrich’s class, said that her work on the show helped open her eyes to the facilities’ impact on campus.

“There’s a lot that happens behind the scenes that I was not aware of until two months ago,” she said. “We really hope we can get across what [facilities workers] want people to know.”

Orr asserted that she expects a high turnout to the show, saying that attendance was excellent at its first rendition. Although the show’s impact on campus still remains to be seen, the preparations have clearly struck a chord with many of its participants.

“I think it’s going to have a great impact on morale for the entire facilities department,” said residence life supervisor and participant Patrick Thomas. “Everybody’s getting to know each other and mingle. We have the chance to slow down and see each other a little bit, so I think a bond’s going to come out of it.”