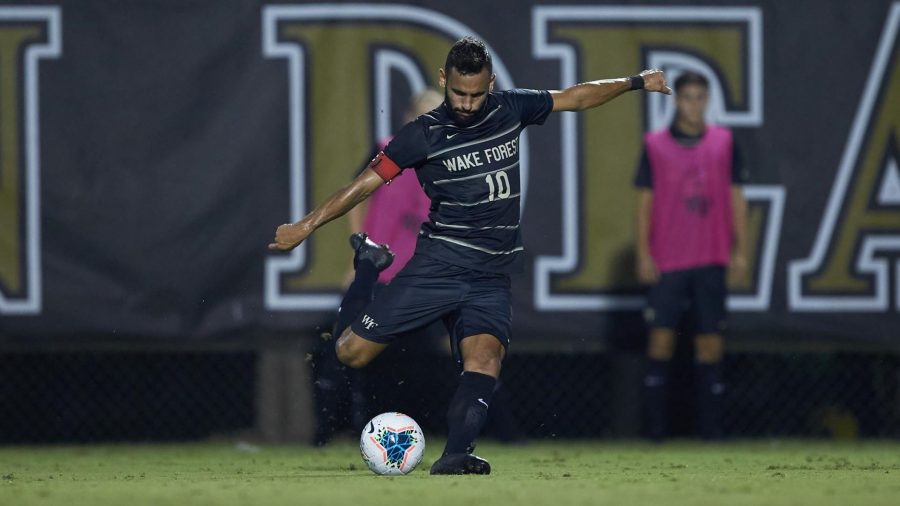 The No. 4 Wake Forest Demon Deacons men’s soccer team showed why it’s one of the top teams in the country this week with a 3-1 win over NC State and a 5-0 win over William & Mary.

“The whole team is really hitting our stride,” said sophomore Kyle Holcomb, who had three goals in the two matches. “I think we’re creating a lot of chances, and I just happen to be the guy who’s finished them the last couple of games. The chances are there, and I think we’re really getting into a flow up front.”

On Friday night, Wake Forest took on NC State in Raleigh. Both teams were held scoreless in the first half, but in the second half, the Deacs exploded offensively for three goals in the final 18 minutes.

The first goal came in the 73rd minute. Wake Forest senior Tater Rennhack passed the ball to Holcomb in the box. Holcomb took two dribbles and fired the ball across the box where it hit the inside of the left post and deflected into the net.

Just three minutes later, NC State responded with a goal of their own. A handball by Wake Forest in the box gave NC State a penalty kick. Senior Gabriel Machado scored to even the score at one a piece.

It looked like the match could be heading to overtime when Wake Forest senior Bruno Lapa stepped up to win the game. With five minutes left, Lapa scored a rebound off sophomore Aristotle Zarris’ shot. The NC State goalie dived to deflect Zarris’ shot and the ball came toward Lapa. Then Lapa one-touched the ball and sailed it past the onlooking goalie to give the Deacs a 2-1 lead.

The final goal of the evening came in the waning seconds of the match. With fewer than 10 seconds left, Lapa scored again to give Wake Forest the 3-1 victory. Lapa put away another rebound, this time recovering his own deflected shot and putting it in for the goal.

Lapa continued his hot streak and opened up the scoring for the Demon Deacons in the 22nd minute with a penalty kick goal. A W&M defender fouled Wake Forest’s Machop Chol in the box by clipping him from behind. The referee gave out a yellow card to W&M and awarded the PK to Wake Forest. Lapa scored with a hard shot to the left side of the net that went past the goalie’s outstretched arm.

Freshman Calvin Harris had the second goal of the night to double the Deacs’ lead. Zarris was dribbling towards the top of the box from the left side of the field and passed the ball to Harris, who was a few yards in front of him. Harris then hit a hard shot from the upper quarter of the box that sailed into the net.

The Deacs weren’t done yet in the half. In the 35th minute, Holcomb scored off Zarris’ second assist of the night. Zarris passed Holcomb the ball in the middle of the W&M side of the field. Holcomb then made a run and got into the left side of the box, where he was tightly covered. Despite the coverage, he got a shot off over the goalie and into the upper left side of the net to give Wake Forest the 3-0 lead going into halftime.

“Our team is patient, and it took us a little bit to break them down. But as the game went on, they were getting exhausted and our team just kept playing and kept pushing,” Zarris said.

The Deacs two second half goals came 28 seconds apart. The first was scored in the 74th minute by freshman Nico Benalcazar. Fellow freshman Omar Hernandez took a corner kick which bounced in the middle of the box. Benalcazar then hit the ball off the bounce and into the net to give Wake Forest a 4-0 lead.

Right after, Holcomb scored his second of the night when  Lapa gave a high short cross which allowed Holcomb to one touch the ball in the air and send it into the net. Wake Forest won the game 5-0.

“I think from start to finish maybe our overall best team performance. A lot of young guys came on and made a really big difference with the energy they brought and the football they brought,” said Wake Forest Head Coach Bobby Muuss.

Wake Forest’s next game is Friday night at 6 p.m. against UNC at Spry Stadium.