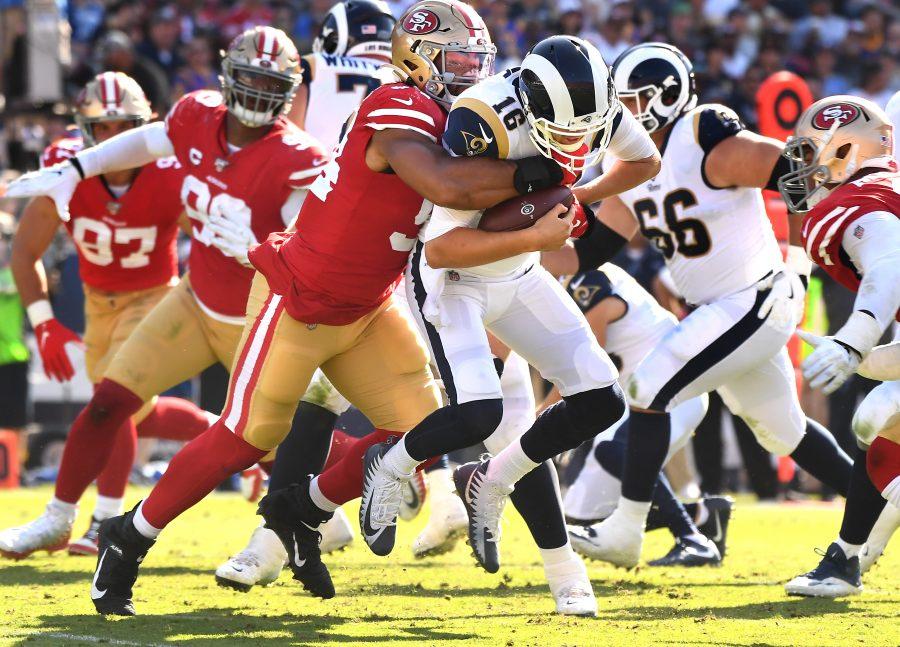 There is a part-time job that pays, on average, $173,000 for about six months of work. Better yet, those six months are spent hanging out around NFL stadiums! The only requirement: don’t jeopardize yourself by personally altering the outcome of a game which has millions of viewers and even more dollars riding on it. Based on this description alone, this is a dream job for a significant portion of the population. Only the best of the best get this job, however only six new individuals were hired going into 2019. How then, can NFL fans absolutely expect at least one game per week being corrupted by referees making calls that are just plain bad? I do not know the answer. I just know I am feeling sorry for the Detroit Lions, the latest victims of this weekly rule inconsistency roulette.

The 49ers certainly picked an interesting way to go about a double-digit divisional win. They chose not to ride the arm of quarterback Jimmy Garoppolo to multiple touchdowns, or any at all for that matter. They did not dominate the turnover battle and pick up a defensive or special teams TD. No, they lost the turnover battle two to one. They made the win possible by holding Jared Goff to 78 passing yards on 24 attempts. Factor in sacks and this number turns into 48 yards on 28 attempts, or a not-so-strong 1.7 yards per attempt. The Rams can chalk this up to Todd Gurley’s absence, but Jared Goff simply needs to be better.

Titans fans likely expected their team’s defense to hinder Denver’s offense. They very likely did not expect Ryan Tannehill to finish the game only 22 rushing yards shy of running back Derrick Henry. Vrabel and Co. made the decision to pull Marcus Mariota in favor of Tannehill in the third quarter in hopes of a comeback, but the offense, though slightly improved, still failed to put points on the board. Titans Offensive Coordinator Arthur Smith needs to settle with a QB and design a game plan around him quickly if they hope to salvage anything from this season. Meanwhile, Denver is putting a streak together with strong defensive play and a capable offense. Look for them to put up a fight against the Chiefs on Thursday night.

Neither mononucleosis nor the Cowboys stood a chance against Sam Darnold. His immune system protected his body just like his offensive line did, only allowing two sacks against a strong Cowboys front seven. We’ll stop with the mono references here. Robby Anderson caught five Darnold passes for 125 yards and a touchdown, while Jamison Crowder came within two yards of breaking 100 himself. The Cowboys put up a fight late, but the Jets were able to hold on to get their first win of the season. Make no mistake, the Cowboys can play with any team, any Sunday. This was an inspired Jets team, which hopes to take the same spirit to the Patriots next week.

Coming out of the bye week, the Raiders somehow find themselves only a half-game behind the Chiefs for first place in the AFC West. Green Bay improved to 5-1 at the expense of the Lions, setting this Week 7 matchup up to be a surprisingly significant one for both parties. The Raiders path to victory includes three stars to align: first, Derek Carr can’t make any costly mistakes; second, Josh Jacobs needs to continue to improve; third, the Raiders defense has to play their best game of the year. Lambeau Field is not a conducive environment for any of these, but Jon Gruden may just be crazy enough to pull it off.

With only a half-game separating these two atop the AFC South, this game is huge in the playoff race. If the Texans win, they further separate themselves and put the Colts in catch-up mode prior to the halfway point of the season. If the Colts can pull out the win, they’ll become one of the most shocking division leaders in the NFL. The Colts are confident coming off an upset over the Chiefs at Arrowhead Stadium. Playing at home with the crowd behind them, the Colts should absolutely believe they can win this game.

Unlike the previous two games, this game has little playoff implications. However, the Jets have reason to believe for the first time this season. Tom Brady and the Patriots will not take this game lightly, so if the Jets are able to keep it competitive, it’s because the Jets played hard and executed a good gameplan. I don’t expect this to happen, but the Patriots showed some vulnerability early against the Giants last week. One thing is for certain, the Jets aren’t following the lead of the Dolphins in tanking. A potentially great quarterback and a confident attitude are building blocks for the type of franchise the Jets want to become — a franchise like the New England Patriots. To be the best, you got to beat the best first.